Russia has gotten a huge head start on the United States in gaining access to Lebanon’s oil and gas sector, allowing Moscow to continue to strengthen its economic position across the Middle East. 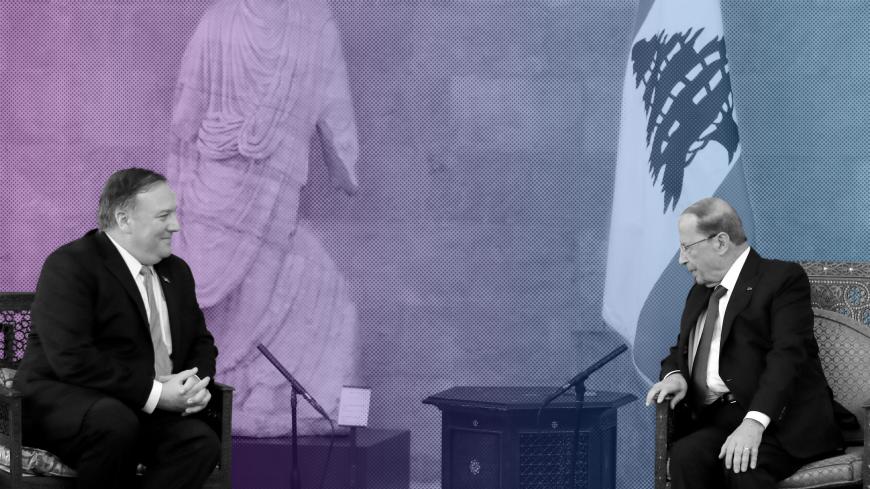 BEIRUT — During a Middle East tour last month, US Secretary of State Mike Pompeo focused primarily on Iran’s influence in the region, but on Mar. 20 in Jerusalem he also labeled Russia an adversary of US regional allies in addition to Iran and China when speaking about energy and security in the eastern Mediterranean. “Revisionist powers like Iran and Russia and China are all trying to take major footholds in the East and in the West,” Pompeo said, alongside Israeli Prime Minister Benjamin Netanyahu and the leaders of Greece and Cyprus.

Pompeo had also reportedly planned to set “red lines” on Russian projects in Lebanon while in Beirut March 22-23. Yet, whatever plans Pompeo may have had to counter Russia in Lebanon, they seem to have had little effect. Lebanese leaders have doubled down on working with Russian companies in their country's expanding oil and gas sector in the weeks since Pompeo’s visit.

Although the United States maintains an important degree of diplomatic clout in Lebanese energy matters, Russian economic investments in the sector have far outpaced those of the Americans, and Russian officials and business leaders have expressed their desire to take further steps to cement roles as key players like the United States continue to lag behind.

“[The Russians] have an advantage over the Americans not only in Lebanon, [but] in the region as well,” Amal Abou Zeid, adviser for Lebanese-Russian affairs at Lebanon’s Foreign Ministry, told Al-Monitor.

Lebanon and Russia signed a memorandum of understanding to cooperate on oil and gas in October 2013, and since then cooperation between them has deepened. In December 2017, the Lebanese government awarded its first contracts for offshore oil and gas exploration to a consortium of three firms that included Novatek, Russia’s second-largest gas company.

This past January, Russia's majority state-owned oil giant Rosneft signed a deal to manage, operate and potentially rehabilitate and expand part of the oil storage terminal in Tripoli, Lebanon’s second largest city, as part of a 20-year lease. Rosneft is also competing in a bidding process along with other consortiums, including an American company, for an offshore gas terminal off the Lebanese coast.

Days after Pompeo’s visit, Lebanese President Michel Aoun traveled to Moscow, where he met with Russian President Vladimir Putin and Rosneft CEO Igor Sechin, who said the company is interested in “elevating the oil facilities in north Lebanon.” According to Abou Zeid, Sechin is interested in building up to three additional oil storage facilities in Tripoli and potentially investing in a future refinery in the north.

Cesar Abi Khalil, a parliamentarian who served as energy minister when Lebanon signed the Tripoli deal with Rosneft, told Al-Monitor that there is “high interest” in Lebanon to work with companies, including American ones, on refinery construction and rehabilitation. He added that ultimately, contracts will be awarded to companies that present the best proposals, as Rosneft did for the Tripoli terminal.

Russia’s interest in Lebanon is tied to its regional strategy. Since 2016, Rosneft has steadily expanded its operations into Iraq, Egypt and Libya, and Gazprom, Russia’s state-owned gas company, has been making inroads in Syria’s gas market during the civil war there. While Syria’s oil and gas reserves are dwarfed by those in neighboring Iraq, its location is highly strategic for Russia, which has been supporting Syrian President Bashar al-Assad in the civil conflict since 2015. Hundreds of Russian mercenaries have reportedly been killed securing oil fields in the country, and Russia has begun exploring for oil and gas off the Syrian coast.

Abou Zeid confirmed that the rehabilitation of a long-disused oil pipeline connecting Tripoli with oilfields in Iraqi Kurdistan, where Rosneft is active, was one of the topics discussed by Aoun and Sechin in Moscow. It is likely that gaining access to oil infrastructure in Lebanon in addition to offshore reserves in the country will enhance Russia’s strategic position in Syria and across the eastern Mediterranean, but it remains possible that it could also use the Tripoli facilities to try to bypass US sanctions on fuel shipments to Syria.

Meanwhile, American companies have been unable or unwilling to secure stakes in Lebanon’s new offshore prospects, which the US Department of Energy estimates will produce almost $254 billion between 2020 and 2039. Abou Zeid said that he had heard that ExxonMobil had entered into a consortium before the first bidding process for the offshore exploration contract began, but ultimately they and many other American companies failed to submit bids once they were eligible.

“I am certain that the Americans are interested, and they were not very happy with the Russian presence in this sector,” Abou Zeid said, speculating that political issues, like Hezbollah’s role in Lebanese politics, may have scared off potential American investors.

Mona Sukkarieh, a political risk consultant and co-founder of Middle East Strategic Perspectives, told Al-Monitor that other factors were more likely to be involved.

“Repeated delays resulting from frequent vacuums within the executive branch, an incomplete legal framework, changes in blocks offered and a change in market conditions all affected companies’ enthusiasm for the first licensing round,” she said.

Abi Khalil agreed that market forces were partially to blame for the lack of interest from the United States during the first round of bidding, but he also said that he had found ongoing interest by American firms in Lebanese oil and gas during his three official visits to the States, including in potential refinery projects across the country.

Despite these difficulties, the Novatek consortium followed through on its interest and secured rights to two blocks in Lebanon’s Exclusive Economic Zone (EEZ), one of which is in a disputed zone that Israel has claimed as part of its own EEZ since 2010. On April 4, Lebanese Energy Minister Nada Boustani announced the opening of a second round of bidding for contracts to five additional offshore blocks, two of which lie along the disputed border area. Lebanese leaders have long maintained that Israel is encroaching on Lebanon’s maritime boundary.

On April 1, parliament Speaker Nabih Berri said that Lebanon won’t give Israel “one cup” of its water. According Berri’s office, on March 22 the speaker and Pompeo discussed the issue of Lebanon’s southern maritime border and efforts to settle the dispute with Israel.

Abou Zeid claims that all the involved parties are interested in seeing the United States play a mediating role in the boundary issue. Regardless, US influence over matters related to energy in Lebanon are quickly diminishing given American companies’ absence in the country's oil and gas sector and the lack of trust among Lebanese leaders, who believe Washington is biased toward Israel’s geopolitical positions.

“The US is really, one, not that interested, and two, the space that the US used to have in Lebanon in terms of influence and shaping decisions, it’s been lost,” Hanin Ghaddar, a researcher specializing in Lebanon and Iran at the Washington Institute for Near East Policy, told Al-Monitor. She added that in her view, it is unlikely that American firms will gain any offshore contracts.

So far, US efforts to counter Russian expansion in the eastern Mediterranean through diplomacy have proven inadequate. Unless American companies get serious about acquiring stakes in Lebanon’s offshore reserves, it will likely be almost impossible for the United States to overcome the head start Russia has gotten in Lebanon’s oil and gas sector, allowing Moscow to continue to strengthen its economic position across the Middle East.