If handled correctly and the status quo between Hezbollah and Israel is maintained, Lebanon’s oil and gas exploration process will lead to the production of energy in 2021-22. 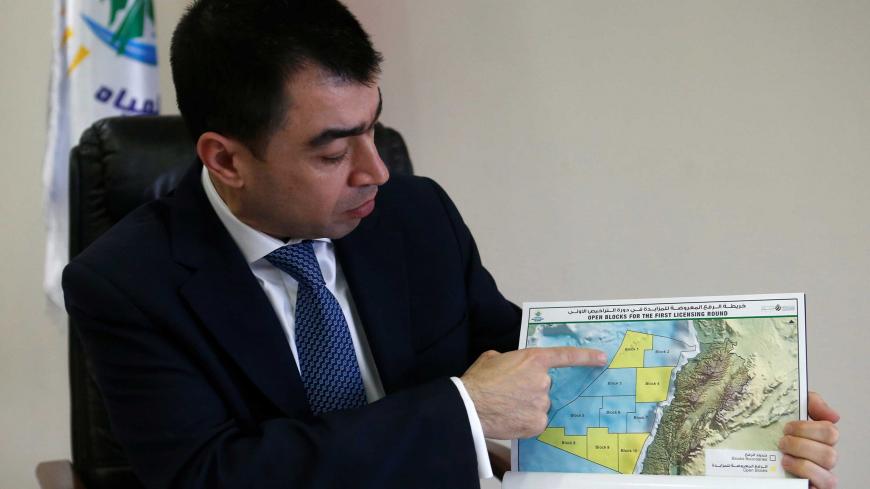 Minister of Energy and Water Cesar Abi Khalil shows a map of Lebanon with sea blocks for oil and gas licensing during a news conference in Beirut, Lebanon, Jan. 26, 2017. - REUTERS/Mohamed Azakir

Three interconnected developments that occurred in December 2017 will have a lasting impact on Lebanon. The Lebanese government made two long overdue decisions: launching the energy exploration process and setting the parliamentary elections date for next May. The third development is a breakthrough that has regional implications: a United Nations-sponsored meeting was held between Lebanon and Israel to discuss for the first time the demarcation of their maritime border, an official Lebanese source told Al-Monitor.

After years of tensions and delay, the Lebanese government had agreed in January 2017 on a formula to divide the offshore oil and gas blocks along the Lebanese coast on a political, geographical and sectarian basis. The winning bidder of the first licensing round was a consortium of France’s Total, Italy’s ENI and Russia’s Novatek. Their bid was confined to two blocks only, including block 9 in south Lebanon near Israel’s Exclusive Economic Zone. Official sources in Lebanon told Al-Monitor that the exploration and production agreement between the Lebanese government and the consortium will be signed at the end of January, whereas exploration is expected to begin in mid-2019 and production in 2021-22.

The smooth flow of oil production can only be ensured by two factors: maintaining the minimal agreement among Lebanese leaders and maintaining the current rules of engagement between Hezbollah and Israel.

On the domestic level, the energy process will largely depend in the foreseeable future on the dynamics between President Michel Aoun and parliament Speaker Nabih Berri. Aoun aims to keep the oil and gas exploration process in the Energy Ministry, which has been under the influence of his political movement since 2009, while Berri seeks to establish alternative institutions that allow him to exert control over the process.

The next parliament, with a term that expires once the energy exploration concludes in 2022, will have to debate and vote on establishing a sovereign fund to preserve and invest the surplus revenues of oil and gas production. The exploration process’ financial dimension is currently led by a small unit in the Finance Ministry, while the energy minister, advised by a multi-confessional Petroleum Authority, handles the technical side. Moving forward, Lebanese politics is not expected to have an impact on the exploration process, at least until production starts.

It is increasingly obvious that oil and gas exploration in the Mediterranean adds a new layer to the complex enmity between Israel and Hezbollah, most notably in Lebanon’s southernmost blocks where oil and gas reserves are potentially abundant. The blue line that was drawn in 2000 between Lebanon and Israel, from Shebaa Farms to Naqoura, was not extended into the sea, which caused a dispute over 860 square meters (9,257 square feet) of international waters and triggered an energy exploration race between Lebanon and Israel.

US and UN efforts to resolve that dispute have previously failed and have been suspended since 2014. However, an official source in Lebanon told Al-Monitor that a trilateral meeting was held in late December 2017 between military commanders from Lebanon, Israel and the United Nations Interim Force in Lebanon (UNIFIL) to discuss the demarcation of what is known as the maritime blue line. Meanwhile, Lebanon and Israel are making sure not to come close to the disputed international waters.

Indeed, the geopolitical impact of energy discovery on Lebanon and its neighborhood should not be understated, as it helped the country withstand domestic and regional turmoil since 2011, from upheaval in Syria to the recent resignation saga of Prime Minister Saad Hariri. As a result, the United States became more cautious in approaching Lebanese politics to help Israel clear roadblocks to become an energy player in the Middle East. Satisfied with the status quo along the Lebanese-Israeli border since 2006, both Hezbollah and Israel became less interested in a confrontation as they eyed the economic benefits of oil production.

The international community is invested as well in maintaining stability. The European-Russian consortium reflects a decision to sponsor Lebanon’s entrance to the petroleum production, which some have called a “petroleum UNIFIL,” as both France and Italy are heavily invested in the UNIFIL forces operating near the Lebanese-Israeli border.

Impact of energy production on Lebanon

Lebanon is not expected to become a major energy exporter, as the country’s excessive demand for electricity is big enough to absorb the energy production in the next two decades at least.

The data speculations regarding the estimated oil and gas reserves have fluctuated over the years. An official Lebanese source was skeptical, saying, “For sure, we do not have proven reserves. What is publicly available is informal information.” Furthermore, the production costs tend to increase when we move away from the Nile to the Mediterranean basin due to the thick sedimentary cover of the rocks on the Lebanese coast. While the Energy Ministry and the consortium signed a production-sharing agreement, production costs can later increase and cut the profits of the Lebanese state.

Managing expectations is paramount regarding the potential benefits and rewards of energy production. The Lebanese government has yet to devise a long-term economic plan or offer a road map that addresses the country’s crippling electricity problem and a national debt spiraling out of control. Lebanon’s energy promise could indeed be a regional game changer, but the jury is out on whether the Lebanese people will get the chance to reap the economic benefits.