Renewed tension over the demarcation of the maritime border between Israel and Lebanon has the United States engaged in shuttle diplomacy between the countries. 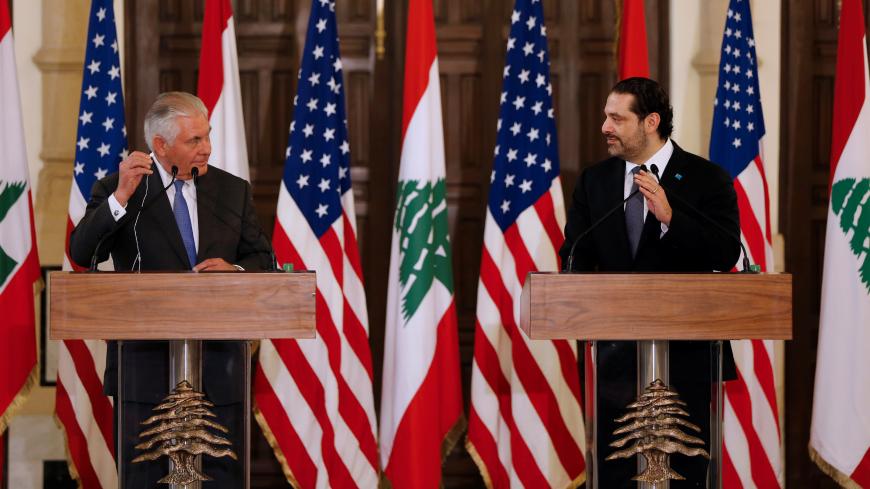 When Lebanese Armed Forces commander Gen. Joseph Aoun asked what his troops should do if Israel violated Lebanese waters, Prime Minister Saad Hariri promptly responded, “You shoot at them.” The maritime dispute with Israel is dominating Lebanese politics as the US State Department’s David Satterfield continues his three-week shuttle diplomacy between the two countries to reach a common ground, or at least prevent the dispute from spiraling out of control.

Hariri’s forceful statement should be viewed through a Lebanese lens and seen as a rejoinder to last week’s speech by Hezbollah Secretary-General Hassan Nasrallah, who offered his armed group as a guarantee that Israel will not intrude in Lebanese waters in the southern border area. Lebanon worries that Israel could use its operations in the Karish gas field to perform directional drilling that would beat Lebanon to the exploration of the adjacent and contested Block 9. Lebanon’s exclusive economic zone map, published in March 2013, includes a small triangular area contested by the two countries, and Beirut prioritized Block 9, which juts into the contested zone, in the first round of offshore licensing. After Israeli Defense Minister Avigdor Liberman on Jan. 31 called Lebanese exploration of Block 9 as “provocative,” the two sides began to trade threats.

This heightened level of tension prompted Lebanon to be on Washington’s radar once again with the visit of the first US secretary of state to Beirut since John Kerry in June 2014. It also signaled the resumption of the 2012-16 mediation by the State Department that was led by Frederic Hof and later Amos Hochstein. Secretary of State Rex Tillerson’s visit to Beirut on Feb. 15 seems to be rather motivated by three priorities: securing a smooth flow of Mediterranean gas; protecting US companies in Israel and Cyprus from any potential conflict; and preventing a scenario where Hezbollah takes charge of the maritime dispute with Israel. Tillerson spent five hours in Beirut traveling from one headquarters to the other to meet the “troika” of President Michel Aoun, parliament Speaker Nabih Berri and Hariri, who had to meet numerous times to reach a consensus on how to respond to the US mediation. Berri represents the hawkish voice that focuses on deterring Israel, and Hariri the pragmatic one who said during the press briefing with Tillerson that the Lebanese government is open to a solution “that will be fair to us and fair to everyone.”

However, it is becoming clear that the US mediation has reached an impasse once again. Lebanon’s idea to have the United Nations Interim Force in Lebanon take the lead on demarcating the maritime border requires a UN Security Council decision to expand the mandate of the UN peacekeeping forces. Israel wants to build a wall according to the Blue Line, or the UN-mediated line of the Israeli withdrawal in 2000, while Beirut wants the land border to be according to the 1923 demarcation line between Lebanon and Palestine. These technical discussions mean that the dispute between the two countries is over 860 square kilometers (330 square miles) of water and 13 points on the land border. The United States agrees with Lebanon that a border deal should be reached before Israel builds a security wall.

Satterfield first offered leaders in Beirut what is known as the “Hof line,” or the deal that Hof shared separately with Lebanese and Israeli delegations in London in April 2012, which gives Lebanon 60% of the disputed 860 square meters. Satterfield then came back with a second offer giving Lebanon 75%. However, the response was that the Lebanese waters are not negotiable. In return, Satterfield carried a counteroffer to Israel this week, which is using the regularly held UN-sponsored tripartite meeting between the Lebanese and Israeli armies in Ras al-Naqoura as a back channel to demarcate the maritime border, a process that was discussed in December. The Lebanese government suggested that the United States can take part in these meetings as a neutral observer, which might require the attendance of the military attache in the US Embassy in Lebanon as an option.

While Nasrallah considered that the United States is not an “honest mediator,” he had a subdued tone compared with July 2011, when he said, “Whoever impinges our future oil installations in Lebanese territorial waters, we will impinge their oil facilities.” Nasrallah said Feb. 16, “If Lebanon’s higher defense council asks us to halt the work of Israel’s oil and gas platforms, we could do so within hours.” He basically put the decision of confrontation on the maritime border in the hands of the defense council, where his allies have a clear majority, instead of the Lebanese government, where such a decision might not be made without a political crisis.

Satterfield is not expected back in Washington until early March, which means he has two weeks to push for a potential breakthrough. Next month, or as soon as a replacement is confirmed, Satterfield is expected to move on from his position as acting secretary of state for Near East affairs. The State Department should be thinking about designating an official with the gravitas of Satterfield to follow up on the mediation since this contentious issue will not go away anytime soon and could escalate if the regional dynamics change at some point.

While this level of diplomatic involvement might not always be needed, the United States should keep these actors engaged and their calculations in check. Hezbollah does not want to give the impression of conceding to Israel, and the Lebanese government wants to avoid the pitfall of directly negotiating with Israel. In return, there are no high stakes in this maritime dispute for Israel, which is not motivated to give a gift to Lebanon with nothing in return. That’s the core of the stalemate. The best-case scenario for the US mediation is to keep the tensions calm and have both sides adhere to the Feb. 9 commitment of France’s Total — which owns 40% of the consortium operating Block 9 — that it will not explore within 25 kilometers (15.5 miles) of the disputed areas. The maritime border has implications on the wider Lebanese-Israeli relations. However, both sides are satisfied with and invested in the peaceful status quo in south Lebanon.