The Caesar Syria Civilian Protection Act, which the US president signed into law recently, sends a clear message to the Syrian government’s political and economic backers in Lebanon, but analysts say its impact may be less forceful. 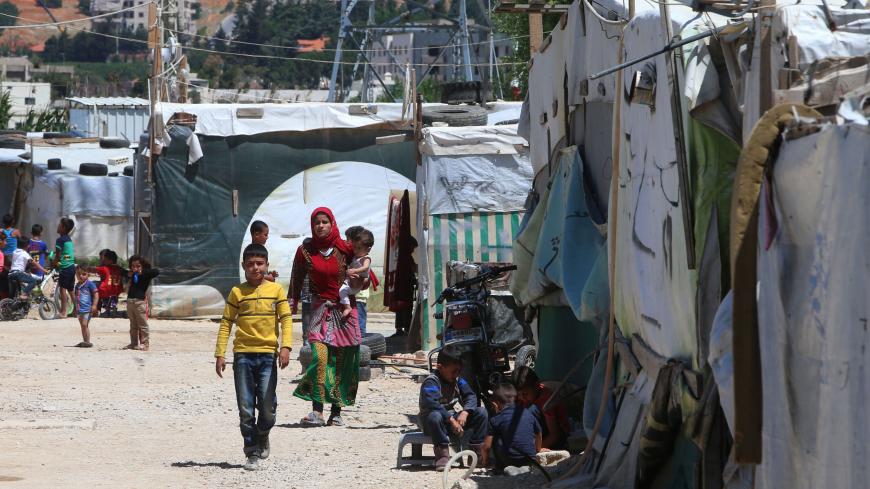 Syrian children and a woman walk in the narrow alleys of a refugee camp on the outskirts of the town of Zahle, Lebanon, June 23, 2018. - HAITHAM MUSSAWI/AFP via Getty Images

In a long-awaited moment for Syrian human rights advocates, US President Donald Trump signed the Caesar Syria Civilian Protection Act, included as part of the National Defense Authorization Act of 2020, into law on Dec. 20. First introduced in 2014, the law was the result of testimony given to Congress by a Syrian government defector codenamed Caesar, the law’s namesake. Caesar left Syria in 2013 with a trove of tens of thousands of photographs documenting mass torture and death in Syrian government prisons and has implored the US lawmakers to pass the law, which would punish the perpetrators of these crimes.

The law is notable in that it aims to hold not only governments but also individuals responsible for financially supporting the Syrian regime, Russia or Iran in military activities, reconstruction efforts and human rights abuses in Syria, and opens the door for foreign business owners to face sanctions for any connections to the pro-Assad bloc.

According to experts, this wide net has the potential to impact certain elements of the business landscape of Lebanon in particular. Although Lebanon’s society and political landscape have long been divided on ties to their Syrian neighbor, connections do exist between firms and political institutions in Beirut and Damascus, and efforts toward participation in Syria’s post-war reconstruction have quickened in the past two years in Lebanon. Lebanon’s banks have been compliant with international sanctions regimes in the past, and experts said the threat of sanctions implemented as part of the Caesar Act might drive any business still working with the regime to divest from any current or planned connections. Yet according to other analysts, Lebanon’s continuing economic crisis and the presence of existing sanctions procedures mean the bill’s impact in Lebanon may be more limited than desired.

As a whole, Lebanon’s economy is closely intertwined with Syria’s private sector, which, according to Lebanese political and economic consultant Roy Badaro who spoke with Al-Monitor, is divided into two sections: one that is independent of the government, and one that is closely tied to it.

“Lebanese firms are at significant risk,” Steven Heydemann, a professor and director of Middle East Studies at Smith College in Massachusetts, told Al-Monitor. He added, “The act is broad; there is no question about it — intentionally so.”

The US State Department’s statement on the passage of the Caesar Act said the law “sends a clear signal that no external actor should enter into business with or otherwise enrich such a regime.” The US Embassy in Beirut declined to provide additional comment.

The Caesar Act specifically states that individuals who knowingly sell technology, information, digital services or support the Assad government’s oil production and military aircraft infrastructure would be subject to sanctions. Sanctions would also be applied to those providing even indirect support for the regime’s construction and engineering projects.

Lebanon is home to various Syrian shell companies, and Lebanese banks are full of cash from Syrian businesses hoping to get around sanctions against the regime, according to Financial Times. In addition, Hezbollah, which is supporting the Assad government militarily, has utilized a network of businesses in Lebanon to aid in their operations.

“To the extent that if any of those firms wish to avoid being sanctioned by the US, there is now additional reason to think carefully about whether they should continue to work with Hezbollah,” said Heydemann, who is also an adviser to the board of the Syrian Emergency Task Force that helped bring Caesar’s case to Congress in 2014. “So to that extent, yes, it can have some significant impact,” Heydemann added.

A US Treasury spokesperson told Al-Monitor the Treasury would not disclose future sanction plans for Lebanon under the Caesar Act. But the United States has sanctioned Lebanese businesses before — two Lebanese shipping companies were sanctioned in June of this year for facilitating shipments of Iranian oil into Syria. This year, the United States also placed sanctions on Lebanon’s Lana TV, a media company owned by Assad-linked Syrian business magnate Samer Foz, which aired commercials encouraging investments in Syrian government projects.

According to Badaro, however, the level of direct ties between Lebanese businesses and the Syrian government remains comparatively small. Both he and Heydemann noted banks have been universally compliant with the US sanctions regime in Lebanon so far, and several Lebanese banks have stepped back their Syrian operations in response to US pressure.

“We don’t have the luxury to not abide by international regulations,” Badaro said, adding, “There is always a risk. Our job is to scrutinize every business and report this to our authorities to take the necessary actions. What we need is more technical assistance, especially in the algorithms for how to track [criminal activity].”

In addition to targeting existing business ties, the Caesar Act will also likely discourage future Lebanese investment in Syria. Lebanon has attracted increasing Russian attention as a potential base through which to conduct business in Syria, and Lebanon has marketed its northern port of Tripoli over the last year as a conduit for foreign investment in its neighbor’s recovery. In late 2018, several Lebanese caretaker ministers visited the 60th Damascus International Fair to promote the public works, agriculture, tourism and industry sectors in Syria, months before the United States warned Lebanon against participating in reconstruction in February 2019.

“We have any number of Lebanese firms that may not have ties to sanctioned groups but that are looking forward to establishing some sort of more normal business relationship in Syria,” Heydemann said, adding, “That’s now become much more difficult to do.”

Badaro noted that existing sanctions against Hezbollah have hurt the group and its business network. But according to Mohanad Hage Ali, director of communications at the Carnegie Middle East Center in Beirut, US sanctions in general are not as effective as they once were. Hage Ali noted that Lebanon’s economic crisis together with existing precautions within the private sector mean new sanctions would fail to deliver a shock to Lebanese businesses interfacing with the Assad government.

“If you sanction the private sector, which understands the risks of doing business with the Syrian side, that private sector is already taking its own precautions in terms of dealing with the other side,” Hage Ali said. He added, “So I just don’t see the impact.”

The Caesar Act is certain to send a clear message to the Assad government’s political and economic backers in Lebanon, but the effects of its provisions may be less forceful. While it is likely to dissuade businesses from deepening their relationship with Assad’s sphere, Lebanese firms and political actors that already do business with the regime are unlikely to turn their backs on their connections in Syria at this stage.

by Murielle KASPRZAK and Joseph SCHMID | AFP | May 26, 2022
END_OF_DOCUMENT_TOKEN_TO_BE_REPLACED