With residents of Tripoli already suffering shortages under Lebanon’s mounting system-wide collapse, the US Caesar Act promises to both hinder investment in Tripoli and increase cross-border smuggling. 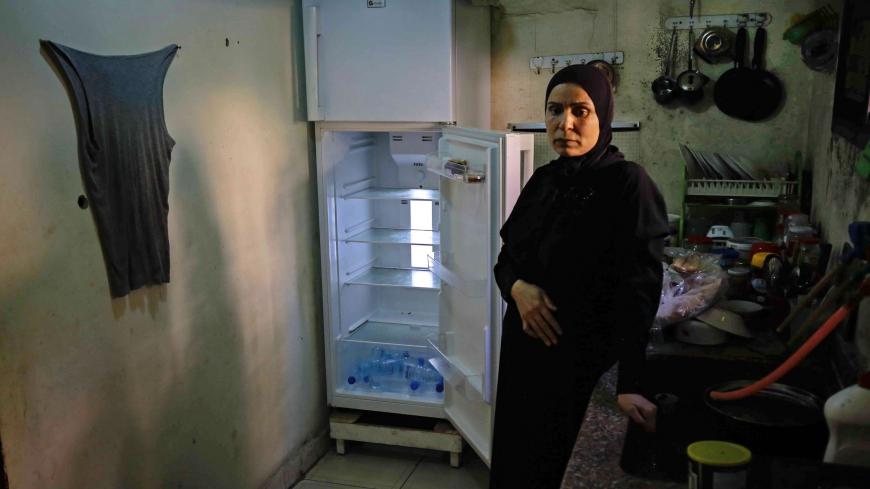 A Lebanese woman stands next to her empty refrigerator in her apartment in the port city of Tripoli north of Beirut on June 17, 2020. - IBRAHIM CHALHOUB/AFP via Getty Images

TRIPOLI, Lebanon — The US Caesar Syria Civilian Protection Act went into effect on June 17, promising to impose sanctions on any actor who provides significant business, military or reconstruction assistance to the government of Syrian President Bashar al-Assad. In neighboring Lebanon, where hyperinflation and multiple financial crises are continuing since last year, the new law is likely to have a significant impact due to the country’s historically close economic relationship with Syria. Lebanese Prime Minister Hassan Diab called on the international community to “shield” Lebanon from the law’s sanctions during a conference in Brussels, Belgium on June 30.

The Caesar Act may have particularly acute implications for Tripoli, Lebanon’s second largest city, which sits just 30 kilometers (19 miles) from the Syrian border. The city has had a longstanding goal to become a regional logistics and economic hub and to act as a gateway for investment in Syria’s post-war reconstruction, and although some officials dispute the idea that disruptions will take place, it is now clear that US sanctions will deter any business or investment involving the Syrian government under Assad until there is a political transition in Damascus.

Cross-border smuggling between Lebanon and Syria may increase as official trade winds down with implementation of the act, exacerbating tensions on the ground in Tripoli, where shortages are already wreaking havoc on the city’s impoverished and crisis-hit residents.

Following years of neglect by the central government in Beirut, Tripoli had moved closer to capitalizing on its strategic position near the frontier. Work began on the Tripoli Special Economic Zone in 2016, the Lebanese Parliament approved a loan to expand the city’s port in 2018 and agreements were made the same year to renovate the city’s train station and to connect Tripoli to Syria by rail.

“There is no doubt that Tripoli is able to be a national, Arab and international investment project in the region,” said Toufic Dabbousi, the president of the Chamber of Commerce, Industry, and Agriculture in Tripoli and North Lebanon. He told Al-Monitor, “And that certainly requires great efforts, a political decision and an agreement with the international community.”

Although he stated that the Tripoli Special Economic Zone relies on a broader set of investments beyond those related to Syria, the zone’s acting chairman and general manager, Hassan Dennaoui, admitted it would be impacted by the Caesar Act.

“We will be losing some of the investors, Syrian and non-Syrian, who were looking to be part of the reconstruction of Syria,” Dennaoui told Al-Monitor. “They will think of stopping or holding any kind of investments.”

“Definitely it will be put on hold,” Lebanese political and economic consultant Roy Badaro told Al-Monitor about plans to use Tripoli’s facilities for post-war reconstruction, saying the port of Tripoli should be thought of as the center of Syrian reconstruction once the international community agrees it can begin.

Dabboussi maintained that trade between Lebanon and Syria would continue despite the Caesar Act because Lebanese traders deal with Syrians who “fall within the interests of America, the United Nations and the international community,” though certain kinds of indirect financial support for government projects may be subject to sanctions.

According to Badaro and other analysts, a decline in official trade between the two countries due to the rising risk of sanctions may lead to a complementary increase in smuggling.

Per year, around $400 million worth of fuel is reportedly lost to the cross-border smuggling. Flour and other items are commonly smuggled into Syria as well.

Badaro stated that poor communities near the Syrian border could potentially benefit from smuggling and other cross-border trade. But according to Sami Nader, the director of the Levant Institute for Strategic Affairs, the flow of fuel out of Lebanon into Syria through smuggling networks is a drain on Lebanon’s financial resources because it is subsidized by the country’s Central Bank.

Tripoli, where a reported 60% of the population makes less than one dollar a day, has already seen tensions come to a head in June over allegations of smuggling into Syria. On June 12 and 13, protesters in Tripoli stopped convoys of unmarked trucks allegedly heading for Syria, resulting in confrontations with security forces on June 13 that left over 80 people injured. Shortly afterward, the World Food Program, a United Nations organization, stated that two trucks that were stopped during those two days belonged to the WFP and had been part of a 39-truck convoy legitimately carrying goods shipped into Beirut from overseas to be transported as assistance to Syria. However, photographs from Tripoli on June 13 show at least nine trucks were halted by demonstrators.

Tripoli activist Ali Kemal el-Ali was on the scene during the clashes trying to separate demonstrators from the military. He told Al-Monitor that although the stopped trucks may have belonged to the WFP, Tripoli had indeed experienced an increase in smuggling activity in the days leading up to the implementation of the Caesar Act on June 17.

“Before the application of the Caesar [Act], what was once one or two trucks became hundreds, one after the other,” he said. “They were trying to smuggle through all the crossings at the same time in the north.”

Ahmad al-Bayaa is a lawyer in Tripoli who worked for the release of several of the protesters who were detained by security forces during the events of June 13. He stated that to local residents who are on the brink of starvation, the sight of trucks carrying food out of Lebanon sparked desperation — whether the convoys belong to the WFP or not.

“Their point of view was clear: that we are not finding food materials. Even using our money we cannot find food in the supermarket,” Bayaa told Al-Monitor. “He sees these trucks, loaded with things that he needs, that he and his family needs, and his poor city.”

The United Nations estimates that Lebanon imports around 80% of its cereal grains, meaning that during a period of hyperinflation when the US dollars used to pay for imports are growing ever more scarce, food supplies are reaching dangerously low levels.

“All the suppliers have stopped [shipments] for the last week,” said the manager of Abou Wahid, a popular supermarket in Tripoli, asking to remain anonymous. “So another week, the whole shop will be empty. How much can we continue like this?”

“They don’t know the value of their goods,” the manager told Al-Monitor about smugglers moving products through Tripoli and elsewhere. “They think about benefits, about money, but they don’t think about how the Lebanese people are in need.”

Tripoli residents already suffering shortages under Lebanon’s system-wide collapse are bracing for the ramifications of the Caesar Act. Due to the crisis gripping Lebanon, the impacts will highly depend on how far much further economic and social factors in Lebanon unravel.