Despite the war, Turkish-Syrian trade is growing in several sectors, fueled in part by the influx of Syrian refugees. 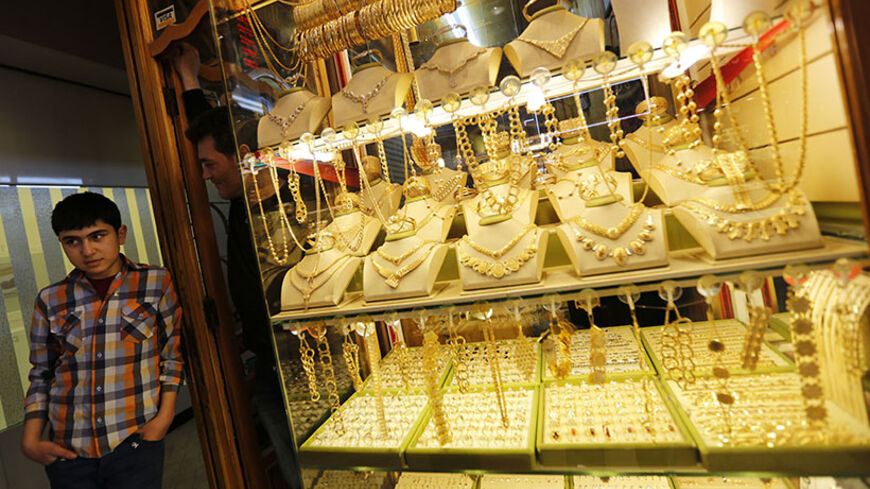 A 17-year-old Syrian boy from Azaz waits for customers in front of the jewellery shop where he works in Kilis, March 18, 2014. - REUTERS/Murad Sezer

The number of Syrians who have crossed the 911 km (566 mile) land border to take refuge in Turkey has reached 800,000. About 250,000 of them are settled in refugee camps, while some have taken residence with relatives in Sanliurfa, Gaziantep and Kilis. Those who can afford it have rented homes near the border, while others have moved to larger Turkish cities.

To survive, Syrian refugees take any job they can find. Sowazaame work as garbage collectors, some in construction and small workshops and some beg in city streets. Syrians caught working illegally are subject to a fine of 759 Turkish lira ($364). Those who employ them are fined 7,612 lira ($3,647).

However, not many people care about the fines, which are not strictly applied because creating employment for refugees helps everyone. Those who live in camps are paid symbolic salaries and all their expenses are met by the Turkish state. Those outside the camps have to survive on their own.

Despite all the hardship and agony of the war and the heart-breaking poverty of many refugees, there is a positive trend of Syrians setting up their own businesses in Turkey.

Syrian businessmen, who initially mainly preferred the border provinces of Hatay and Gaziantep and the port city of Mersin, registered 425 companies in 2012-13, with a significant increase in 2013. From January to July 2013, of foreigners setting up a business in Turkey Syrians were listed first with 260 new companies. Germans came in second with 232 registrations and Iranians third with 189.

In the first quarter of 2014, Turkey has seen a boom in Syrian companies: One out of every four foreign companies set up in Turkey belongs to Syrians. Of the 1,504 companies that became operational in the period January-April, 383 are owned by Syrians with more than 50 million lira ($24 million) in capital. Unlike in previous years, these new companies are located in big cities such as Istanbul, Ankara and Izmir.

Syrian companies operate in 92 different fields, including wholesale-retail commerce, construction, clothing, textiles, shoe-making, real estate, travel, transportation and catering. Syrian companies in Hatay and Gaziantep in general aim at providing the needs of Syrians living there, but there is also a lively export trade of sugar, pasta, flour, wheat, potatoes, bottled gas, textiles and diapers, all in great demand in Syria.

Companies set up in Bursa and Istanbul focus on textiles. The textile industry was one of the leading industries in Syria before the war broke out. Syrian textile industrialists have moved to Turkey and engage in production and exporting.

Syrian businessmen in Turkey are also setting up contacts with buyers in Algeria, Libya and Egypt. As these businesses and factories need Arabic-speaking personnel, they offer significant employment opportunities to Syrian refugees.

After March 2011, profits for Syrians were seriously affected by the civil war. Before the war, Turkey and Syria were trading with low or no customs fees. Investments were encouraged and the Councils of Ministers held joint sessions. The volume of trade had reached $2 billion in 2012, with Turkey exporting $1.6 billion and importing $336 million. This volume sharply fell to $525 million when the relations between the two countries were almost severed in 2012, reducing Turkey’s exports to $460 million and imports to $65.5 million.

Before the Syrian crisis, the forecast of the five-year trade volume with Turkey was $5 billion. Many Turkish firms had set up factories in Syria by investing $300 million. Turkish products were in high demand with nonstop orders from Damascus, Aleppo, Hama, Homs and Latakia.

Prior to 2011, Turkey and Syria had signed 50 cooperation agreements on mass housing, civil aviation, tourism and health. Doing business with Syria was attractive and tourism thrived after visa requirements were abolished between the two countries.

Syria was a market of 21 million people with $12 billion in exports and $14 billion in imports. Before the war, Turkish companies sold household electronics, textiles, cement, wires, fiber optic cables, oil products, iron and steel bars, piping and electric power to Syria. Exports of agricultural products were also on the rise.

The leading 100 Syrian businessmen were planning joint ventures with Turkish firms on roads, ports, airports, hotels, hospitals and shopping malls. All these projects have now stalled.

The focus is currently on meeting demands created by the civil war that have completely altered the makeup of trade. Syrians are mainly in need of foodstuffs to survive, and Syrian firms set up in Turkey are now working on meeting this demand.

The sharp increase in the number of companies set up signals that the trade between the two countries is about to grow again.