Has Turkey’s policy on Syrian refugees started to backfire?

The Syrian refugee question is set to pose a major political headache for Erdogan in the coming period. 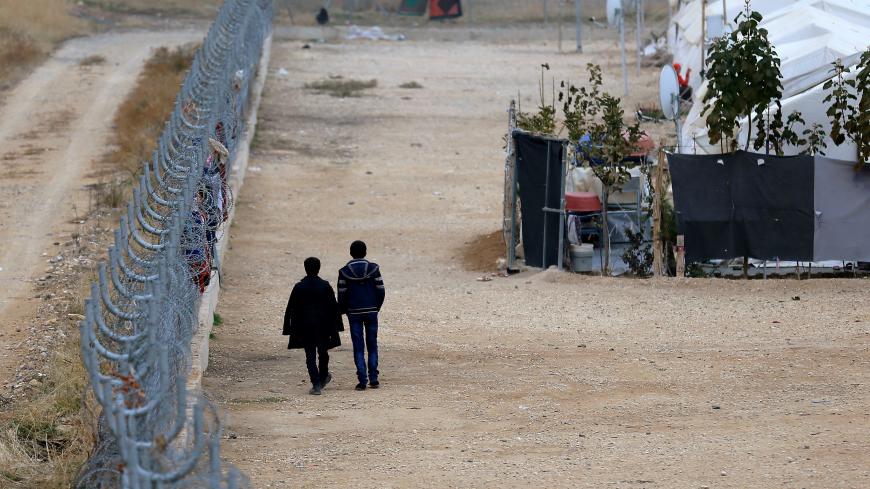 The myth of Turkish sympathy and tolerance toward Syrian refugees, which President Recep Tayyip Erdogan has been promoting self-righteously for years, is crumbling fast. Research shows that an increasing number of Turks now see the Syrians as unwelcome guests and a source of social unrest and economic disruption.

This has left Erdogan and his administration grappling with a problem that is considered by many to be largely of the government's own making.

When the Syrian civil war erupted in 2011, Erdogan announced an open-door policy for Syrian refugees — while other countries were acting cautiously — by citing humanitarian considerations and the need for Islamic solidarity against oppression.

Driven by his innate antipathy for the West, Erdogan also used this policy to lambaste European countries for slamming their doors on the Syrians, while avoiding mention of non-European countries that were doing the same.

This policy resulted in nearly 3.6 million Syrian refugees in Turkey, according to official figures frequently cited by the media, with the heaviest concentration in Istanbul, the country’s largest city.

The results of the municipal elections in March and June, following which Erdogan’s Justice and Development Party lost all the major cities, including Istanbul, showed, however, that his rhetoric regarding Syrian refugees had started to wear thin for Turks.

In an apparent acknowledgment of the political cost of the Syrian refugees, the government has started to impose drastic measures to try to regain some of its lost support.

Following instructions from the Interior Ministry, the province of Istanbul recently announced an Aug. 20 deadline for unregistered Syrians in the city to return to the provinces they were registered in when they first entered Turkey.

The aim is clearly to alleviate the burden posed by Syrians who have come to represent 3.7% of Istanbul’s population of 15 million.

Syrians not registered in the city after that date could be forcibly relocated, and could face deportation if they entered the country illegally and are not registered anywhere.

Claims have also emerged about forced deportations, even if the persons stopped by the police have the necessary documents but were not carrying them at the time.

The main accusations fueling public antipathy toward the refugees include the loss of jobs to Syrians who undercut the labor market, and criminal activity by Syrian gangs or individuals.

Uncorroborated rumors of sexual harassment of Turkish women and children have also set angry mobs against Syrians in various parts of the country on multiple occasions.

The Istanbul-based Women’s Solidarity Foundation says that unregistered Syrians in Istanbul are now afraid to leave their homes and that Turkish businesses are increasingly reluctant to hire them given the public backlash. “The Syrians are unemployed and stuck at home and anxious because they have nowhere to go,” said a foundation spokesperson who did not wish to be identified.

It is also noteworthy that the latest measures against the Syrians started to be introduced after the government’s losses in the recent municipal elections.

As Al-Monitor has reported, these measures include the taking down of Arabic shop signs put up by Syrians. For many Turks these signs represent a clear indication of an invasion by outsiders.

Arguments that there are many English and Russian shop signs in Turkey, on the other hand, fall on deaf ears.

Surveys conducted by Turkish polling companies show that a growing number of Turks believe Syrian refugees pose the second greatest problem for the country, with the first one being the state of the economy. These two topics are also seen by many to be related.

Meanwhile, Erdogan’s claim to have spent nearly $40 billion of Turkey’s money on the Syrians to date is also backfiring, with many asking why this money was not spent on millions of needy Turks.

Another source of anger for Turks is the sight of thousands of Syrians traveling to Syria during the Eid Al Fitr and Eid Al Adha religious holidays, only to return after the holiday ends. The general view is that if Syria is safe for these people to visit, then they should not be in Turkey.

Sevilay Yilman, a controversial and provocative columnist for the daily Haberturk, wrote recently that if Syrians can visit their country despite the bloodthirsty regime there, this shows that all is well and good enough for them there. “So if everything is OK, why are they returning to Turkey? Why?” she asked, echoing the sentiments of many Turks.

Banu Guven, a journalist and prominent human rights supporter, said, however, that this is a simplistic view that does injustice to Syrians in Turkey.

“It’s as if these people are going there to have a good time. The majority are going to see relatives they have not seen for years or to see the state of their ruined and plundered houses,” Guven wrote on the news portal T24.

She said only a few thousand of the over 3 million Syrians in Turkey have traveled to Syria in this way.

Erdogan’s coalition with the far-right Nationalist Movement Party and his use of incendiary nationalist language prior to the municipal elections in March has also — and perhaps unwittingly — fueled increased xenophobia toward Syrians as well as others from the Middle East.

A case in point was the recent attempt by a mob in the Black Sea city of Trabzon to lynch a group of Kurdish tourists from northern Iraq who were carrying the flag of the Kurdistan Regional Government (KRG).

In a separate incident, police intervened with tear gas in Istanbul over the weekend to prevent violence between nationalist Turks and Syrians and their Turkish supporters who had gathered to protest the government’s latest measures.

Such developments have left Erdogan and his Islamist supporters in a quandary. Mehmet Acet, who writes for the pro-government daily Yeni Safak, bemoaned the increase in xenophobia in Turkey.

“Whenever the topic of racism in Europe was opened in the past we would sit comfortably in our chairs and talk about the Germans, the Dutch and the Austrians,” Acet wrote.

“I don’t feel so good talking about this now … because the symptoms of the same disease that has existed in Europe for centuries has started to manifest itself in our country when discussing the Syrians,” he added.

Veteran political commentator Mehmet Tezkan wrote that Erdogan started out by trying to undermine the Assad regime with his open-door policy on Syrian refugees but ended up undermining his own government. “Seven years ago they were encouraging [the Syrians] to come. Now they are seeking ways to send them back,” Tezkan wrote in his column on T24.

Human Rights Watch said in a July 26 statement that Turkish authorities were detaining and coercing Syrians into signing forms indicating their desire to return to Syria. “Turkey claims it helps Syrians voluntarily return to their country, but threatening to lock them up until they agree to return, forcing them to sign forms, and dumping them in a war zone is neither voluntary nor legal,” according to the statement.

Interior Minister Suleyman Soylu denies such claims, saying no one is sent to Syria against their will. He told the Turkish NTV channel that only unregistered Syrians were being rounded up and sent to camps in Turkey. “No one under temporary protection can be deported,” Soylu said.

Faced with the possibility of another mass influx of refugees from Idlib, where military operations by regime and Russian forces are intensifying, the Syrian refugee problem is set to pose one of the greatest political headaches for Erdogan and his government in the coming period.