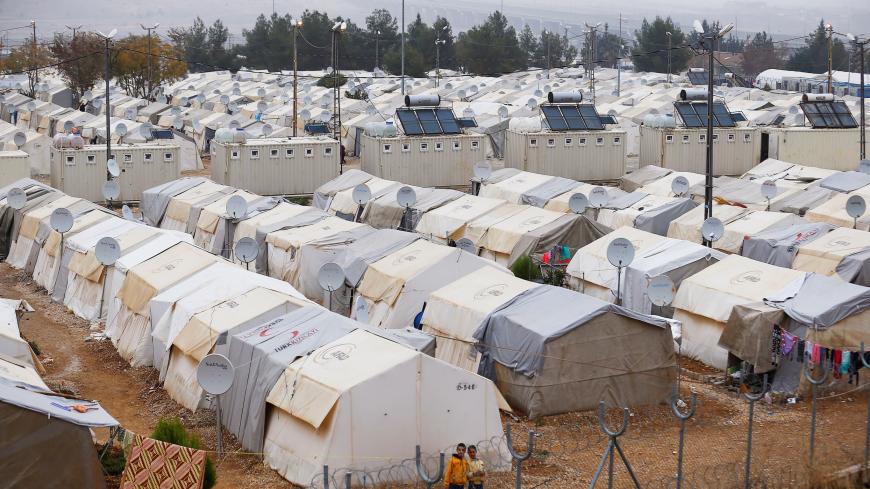 A general view of Nizip refugee camp is seen near the Turkish-Syrian border in Gaziantep province, Turkey, Nov. 30, 2016. - REUTERS/Umit Bektas

As Syrian regime forces advance on rebel positions in Idlib province, the issue of hosting displaced Syrians continues to occupy many high-level and street-level discussions in Turkey. The nation hosts more than 3.6 million Syrian refugees — more than any other country — and the offensive threatens to push a wave of Syrian civilians toward the Turkish border.

On Tuesday, Turkish Interior Minister Suleyman Soylu outlined plans to shelter newly displaced Syrians in humanitarian camps along the border inside Idlib, which is currently home to about three million people, some of whom were displaced from elsewhere in the country. Soylu listed a number of internal refugee initiatives aiming to mitigate rising tensions caused by the prolonged presence of Syrians in Turkey.

Following the March 31 municipal elections, Syrian refugees have increasingly become scapegoats for Turkey’s troubles, blamed for exacerbating an economic downturn. Once cast as a source of national pride, the Syrians are now finding themselves the subject of state interventions seeking to diminish their visibility and limit political backlash against the ruling Justice and Development Party (AKP), which suffered losses at the ballot box partially due to its loose management of refugee policies.

In July, the government first issued an Aug. 20 deadline for unregistered Syrians to leave Istanbul and return to the provinces where they obtained residence permits. Earlier this week, Soylu extended the deadline to Oct. 30, but maintained that the large number of unregistered refugees living in Istanbul were putting a strain on public services.

“We have tried to spread Syrian refugees in a balanced way throughout the country. Each city has a certain capacity,” Soylu said during a press conference on Aug. 21. “Currently, more than 540,000 Syrians have the right to stay in Istanbul. We cannot keep more than this number; we need to regulate.”

Soylu added Syrians legally working or studying in Istanbul would be exempt from the removal order, but its implementation remains controversial as human rights groups claim some refugees have been wrongfully evicted from Istanbul to other regions in Turkey, while others were deported back to Syria.

Though the deadline extension is a welcome development, as it allots unregistered Syrians more time to find new homes and arrange transportation, analysts said relocation would not address the root causes behind Turkish citizens’ discontent, which is largely based on perceptions that undocumented Syrian laborers are taking low-skilled jobs away from locals.

Omar Kadkoy, a researcher on refugee integration at the Ankara-based think tank TEPAV, said forcing Syrians to move would not resolve issues stemming from the lack of legal employment opportunities for refugees in Turkey.

“I don’t think relocating Syrians to provinces of registration will actually help ease the economic or social acceptance of Syrians as … the economic conditions did not [worsen] because of Syrians,” Kadkoy told Al-Monitor. He added that if the goal is to make refugees less visible, then Syrians would need to become “less visible through economic integration and by turning them into active members of society.”

To address labor loopholes, Soylu said companies employing undocumented workers need to register them before Oct. 30 or face fines. Details remain sparse, but the Istanbul governor’s office is establishing a task force that will visit enterprises in search of undocumented workers and provide assistance to employers seeking to formalize their workforce.

Still, Kadkoy said the initiative was overdue as just 65,000 Syrians held work permits at the end of 2018. Labor regulations implemented following the AKP losses in the municipal elections could indicate the party is belatedly addressing weak policies that gave advantages to its rivals, particularly Ekrem Imamoglu of the Republican People’s Party, who won the Istanbul mayorship in part by invoking the mismanagement of the city’s more than 530,000 Syrian residents.

“If the government already had the capacity to oversee all the workplaces, especially in Istanbul, why haven’t they done so for the last eight years?” Kadkoy asked. “It means they have the institutional capacity to not reach a point where informal employment nurtures social tension.”

Yet the formalization of refugee policies could also lead to a number of benefits for Syrians and the communities they inhabit. In a report co-authored by Kadkoy on refugee ghettos in Turkey, the researchers found municipalities in Istanbul’s Fatih and Sultangazi districts did not have data on the refugee population under their jurisdiction. Attempts to register refugees and enter them into government databases could lead to increased medical and educational services in their district, as well as increased funding for civil society organizations assisting refugees.

Berkay Mandiraci, a Turkey analyst for the International Crisis Group who has also researched refugee integration, said the Interior Ministry’s new refugee policies are not only to address overstretched public services, but could also be based on security concerns.

“During our fieldwork, we encountered accounts of unregistered vulnerable Syrian youth being used by criminal networks for theft, human smuggling and drug trafficking,” Mandiraci told Al-Monitor. “It is difficult for security forces to track unregistered refugees and keep them in check.”

The implementation of refugee regulations moving forward remains to be seen as anti-refugee sentiments run high among some segments of Turkish society. A poll by the KONDA Research group found the number of Turks who said they would not live in the same city as Syrians increased from 28% in February 2016 to 60% in July 2019.

As fighting in the Idlib province increasingly displaces Syrians, Mandiraci said Ankara is unlikely to take the political risk of accepting a new mass influx of refugees, which the Interior Ministry estimates could range between 300,000 to one million people. Still, Ankara has pledged to continue an open-door policy, with government officials stating 70,000 new Syrians were registered this year as legal and illegal crossings persist.

“The border remains largely sealed, but crossing is still possible by paying a network of smugglers on both sides who usually have connections to corrupt border guards,” Mandiraci told Al-Monitor.

Noting the Idlib offensive is likely to continue in the coming weeks, Kadkoy said Turkey would need continued support from the international community in managing the humanitarian response.

“At the end of the day, we need to meet the urgent needs of displaced Syrians,” Kadkoy told Al-Monitor. “It’s not only Turkey’s responsibility, it’s an international responsibility to respond to any future displacement of Syrians. It’s not sustainable to leave Turkey alone to handle this issue by itself.”