Turkey’s economic downturn and the lack of long-term residence options are putting pressure on the nation’s 3.6 million Syrian refugees. 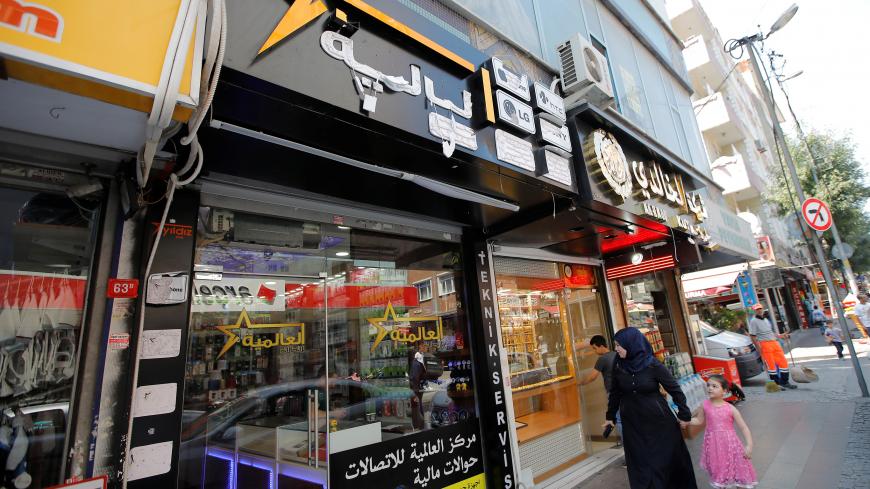 A crowd of Turkish nationals descended on the Kucukcekmece district of Istanbul on June 29, ransacking Syrian-run stores. False rumors had spread that a Syrian male had harassed a local girl. The incident grabbed national headlines, fueling debate on the long-term status of Turkey's 3.6 million Syrian refugees. But it was just one of many attacks against the Syrian refugee community in Turkey.

On the night of July 15, 2016, as a violent coup attempt faltered, a mob of young men vandalized and looted more than 30 Syrian-run shops in Ankara's Onder neighborhood. The neighborhood is home to one of the highest concentrations of refugees in the capital, and its Syrian residents recall the attack clearly, hesitating to speak ill of their Turkish neighbors.

“They broke the glass on our storefront,” Zakaria Baraket, a 52-year-old Syrian from Aleppo and co-owner of al-Nakmeh restaurant in Onder, told Al-Monitor. “Thankfully, they did nothing more than that.”

Baraket said similar incidents have not occurred in Onder since, but he exhaled deeply when asked about the recent Kucukcekmece episode. “It’s not 100% safe here, it’s 50% safe. There are some things going on,” Baraket said, without elaborating.

Down Selcuk Street, where many Syrians have opened businesses in Ankara, another store owner said the welcome mat for refugees was wearing thin.

“In the beginning they would welcome us, donate clothes and furniture to families arriving from Syria, but now they don’t want to give us even a cup of tea,” said the store owner, who withheld his name for personal safety.

“Syrians are hard workers,” he continued. “Turks watch us open businesses and see us succeed, and then blame us for taking away their business. The main reason all this is happening is because the economy has been turning sour.”

As the economic downturn continues in Turkey, observers fear that simmering tensions between Syrians and their host communities will escalate if politicians do not address the growing anti-refugee sentiment.

Since the beginning of the Syrian war, Turkey has received international praise for hosting more refugees than any country in the world. But eight years on, millions of Syrians remain under “temporary protection” status. Such a status excludes them from employment formalities and tax requirements imposed on Turkish citizens, drawing ire from locals who claim Syrians have unfair advantages when establishing informal businesses or entering the labor market.

Now, a growing number of migration experts are presenting long-term residence permits as a sustainable approach to integrate Syrians into the formal economy. Yet, in the current social climate, extending more rights to Syrians may be a hard sell for the many Turkish citizens struggling to cope with high inflation and rising unemployment.

In recent months, multiple surveys have shown growing public disapproval of Syrians’ long-term residence in Turkey. One study by Istanbul’s Kadir Has University showed that the share of Turks unhappy with the presence of Syrians rose from 54.5% in 2017 to 67.7% in 2019.

Berkay Mandiraci, a Turkey analyst for the International Crisis Group and co-author of a report on anti-refugee tensions in urban communities, said much of the animosity stems from economic competition between Syrians and Turkish citizens. As many refugees lack work permits, Syrians often take unskilled jobs for half the wage paid to Turkish citizens, dragging down salaries for legal workers in multiple sectors, including agriculture and manufacturing.

“While on the surface it appears as though tensions erupt because of rape, abuse or noise [disturbances], when you scratch the surface you will usually find an economic competition story that has pent-up grievances,” Mandiraci told Al-Monitor.

Such grievances played a prominent role in recent municipal elections, in which Binali Yildirim, the Justice and Development Party’s (AKP) mayoral candidate for Istanbul, told voters he would deport Syrians who caused trouble. Following a win by the opposition party’s Ekrem Imamoglu, much discussion has focused on the prevalence of Arabic text on Syrian-run shops in Istanbul, which the new mayor has vowed to reduce to preserve the city’s Turkish character. On the night of Imamoglu’s victory, the hashtag “Suriyeliler Defoluyor,” or “Syrians Get Out,” trended on Turkish social media.

A study conducted before the elections found that the residents of Fatih, an Istanbul district with a large refugee community, listed “Syrians” as the second most pressing issue, behind “economic hardships.” Conducted by the Economic Policy Research Foundation of Turkey (TEPAV), the study, titled “Syrians in Istanbul and Post-War Syrian Ghettos,” found 95% of Fatih residents were unhappy with the presence of Syrians.

According to the study’s co-author, Omar Kadkoy, a researcher on refugee integration at TEPAV, such sentiments may be the result of a largely hands-off approach taken by municipal authorities in Fatih. Authorities have done little to mediate intercommunal tensions over the years. In contrast to Fatih, Kadkoy found better relations among Turkish residents and refugees in the Sultanbeyli district of Istanbul, which also hosts a high number of refugees, but whose municipality has taken a more active role in integrating Syrians.

The Sultanbeyli municipality not only dispersed Syrians in housing throughout the district to prevent them from clustering together, but also established a nongovernmental refugee association through international funding to provide Syrians with routine services as well as assistance in attaining work permits, business registration papers, vocational training and Turkish-language courses.

Kadkoy said the municipality had established a workable model for other local governments to follow to defuse social tensions.

“Many municipalities claim the central budget allocated by Ankara is hindering their ability to provide adequate services to Syrians," Kadkoy told Al-Monitor, "but what Sultanbeyli did shows … [that] establishing an NGO allows them the privilege of applying for funds to benefit from capacity-building schemes supported by EU financing."

He added, “Working closer with civil society organizations can create a bridge between the government, newcomers and the local population.”

Yet regardless of how proactive municipal governments may be, Kadkoy noted the long-term legal status of Syrian refugees will require sustainable solutions, as many are likely to remain in Turkey for years to come, and the current “temporary protection” status inhibits their future prospects of moving beyond unskilled labor.

“Some [Syrians] don’t invest in their profession or language skills because they feel like they might be sent back if their residency is abruptly terminated,” Kadkoy said. “They want something that makes them feel secure enough to weave themselves into the economy with more legitimacy. … [T]his would make things better for both sides.”

Back on Selcuk Street, in the Onder district of Ankara, Faiz Abed al-Kareem, a 38-year-old from Aleppo, sits behind the cash register of his grocery store and shrugs off the news of rising tensions between Syrians and Turks. His store was attacked July 15, 2016, but he said it was a one-time incident and that his Turkish neighbors have treated him kindly, overall.

“Yes, there are some problems here and there, but my kids go to school, we can see a doctor when we need to and my business provides enough to feed my family,” Kareem said.

“Turkey has been good to us,” Kareem continued. “If Turkey did not open the border with Syria, Assad would have slaughtered us all. There is no country in the world that stands with Syrians like Turkey has.”