Arabic shopfronts have fallen prey to growing popular resentment over Syrian refugees in Turkey, fueled by the country’s economic downturn and cultural wars. 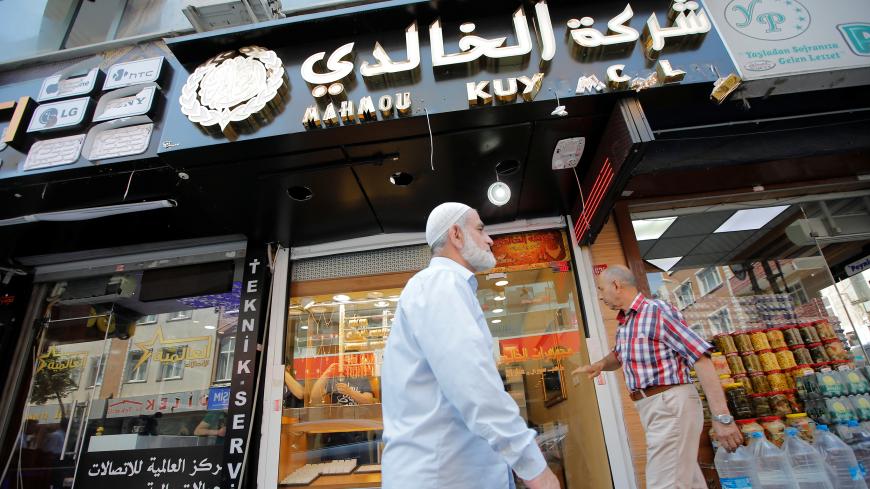 The Turkish authorities have begun to remove Arabic shop signs across the country in a bid to soothe popular resentment over the Syrian refugees, which -- stoked by Turkey’s economic crisis -- has raised the political costs for the government.

Arabic shopfronts have mushroomed across Turkey since the refugee influx began in 2011, adding a distinct feature to the urban landscape in a country where Arabic script has political connotations beyond the problem of refugees. The replacement of Arabic script with the Latin one in 1928 was one of the sweeping reforms of modern Turkey’s secularist founder, Mustafa Kemal Ataturk, to transform a nation rising from the ashes of the Ottoman Empire.

According to Interior Ministry data, more than 3.6 million Syrians were under “temporary protection” in Turkey as of June. The refugee population totals more than 4 million when people from other countries such as Iraq, Pakistan and Afghanistan are included. Many have started small businesses in Turkey, catering mostly to fellow refugees. For many locals, Arabic signs have become an omnipresent reminder of the multifaceted refugee problem, with some even fretting that Turkey is “being lost” or “Arabized.”

Syrians have set up more than 15,000 companies in Turkey thus far, according to figures cited by Trade Minister Ruhsar Pekcan in response to a recent parliamentary question by Sezgin Tanrikulu, a member of the main opposition Republican People's Party. The Syrian businesses are concentrated mostly in Istanbul, nearby Bursa, the Mediterranean province of Mersin and the border provinces of Hatay and Gaziantep.

Prominent Turkish columnist Emin Colasan is among those irked by the spread of Arabic shop signs. He told Al-Monitor that the signs represented a regression from the gains of Ataturk’s reforms. In a July 6 column in Sozcu, a daily critical of the government, Colasan wrote, “In 1928, the alphabet revolution took place. Decades on, Arabic script has been put back on the market amid the invasion of Syrians, Arabs, Asians and Africans. Turkish has been tossed into the dustbin.”

The columnist agreed with those who fret about feeling estranged in their own country. “People are stupefied by the sight of Arabic signs in big cities. You wonder whether this is Syria, Saudi Arabia or Iraq,” he said.

The controversy grew so much that ahead of the March 31 local elections, an opposition candidate made it a campaign issue in Fatih, a district home to one of the largest Syrian communities in Istanbul. “I will not cede Fatih to the Syrians,” Ilay Aksoy of the Good Party vowed in an election banner hung in the district. In further controversy, reflecting also Turkey’s cultural wars, she shot a promotional video in fluent English, leading an Islamist paper to slam her as an “enemy of Arabs” and “infatuated with infidels.”

President Recep Tayyip Erdogan chimed in, calling Aksoy “disgraceful” and “impertinent” during an election rally in Istanbul. “You are fine with English — why are you annoyed with Arabic?” he roared. “Arabic is an international language. Ignoramuses are running for office in Fatih.”

Though Erdogan’s government has been largely supportive of the Syrians in the face of popular misgivings, inter-communal tensions have often degenerated into violence in the streets. Mounting discontent with Ankara’s refugee policy emerged as a major factor in the stunning defeats the ruling Justice and Development Party (AKP) suffered in big cities in the March 31 polls and the June 23 rerun of the mayoral race in Istanbul, in which the oppositional winner came in first even in AKP strongholds such as Fatih.

It was in the aftermath of the Istanbul rout that the AKP government decided to remove Arabic shop signs. Deputy Interior Minister Ismail Catakli announced in early July that shopfronts would be brought in line with regulations requiring that at least 75% of inscriptions on signboards be in Turkish.

Social media has been abuzz with the issue, with protests along the lines of, “You cannot ban Arabic signs, while leaving intact the English ones.”

No doubt, the crux of the matter is not linguistic but economic. Refugees from Syria and other Arab countries offer cheap labor, contributing to joblessness among the locals. Shop signs in English and Russian are also widespread in Turkey, but generate little reaction as they appeal to European and Russian tourists who bring in revenues, boosting the economy. In contrast, the refugees pose competition in the labor market, ready to work illegally for half of the salaries of Turks.

Turkey’s unemployment rate stood at 14.1% as of March, up from 9.1% in 2011, when the Syrian influx began, according to official statistics. The number of jobless increased to more than 4.5 million from about 2.3 million in the same period.

Of course, the Syrians are not the sole reason for the growing army of jobless. Ankara has failed to promote job creation and mismanaged and wasted funds, among other missteps that led to the current recession. Nevertheless, the cheap Syrian labor cannot be ignored as a factor exacerbating unemployment and hostility against refugees.

Closed economic networks in refugee communities — Syrians usually shop at Syrian-run businesses flagged with Arabic signs — have also fanned resentment, especially among small shopkeepers grappling with economic woes. An AKP politician, who spoke on condition of anonymity, recounted the grumblings he encountered during canvassing work in Istanbul in the recent elections. The Turkish people “are shouldering the burden of the refugees, but they go to each other even for shopping. We get nothing from them,” the politician quoted shopkeepers as saying.

Proportionally, the highest Syrian concentration is in the border province of Kilis, where the refugees make more than 80% of the 142,500-strong population. With the predominance of Arabic signboards, the provincial capital looked as if it had changed hands until a few weeks ago. To save appearances at least, the local authorities conducted a big signboard operation, removing hundreds of Arabic shop signs in the city.

It is now Istanbul’s turn. Government and municipal officials have launched a joint effort to replace signboards in the sprawling city, where more than half a million Syrians reside. According to Interior Minister Suleyman Soylu, all Arabic shop signs in Turkey will be replaced by the end of the year.