Are Syrians in Turkey no longer Erdogan’s 'brothers'?

Desperate to maintain its support base, the Turkish government limits Syrians access to basic services and initiates mass deportations. 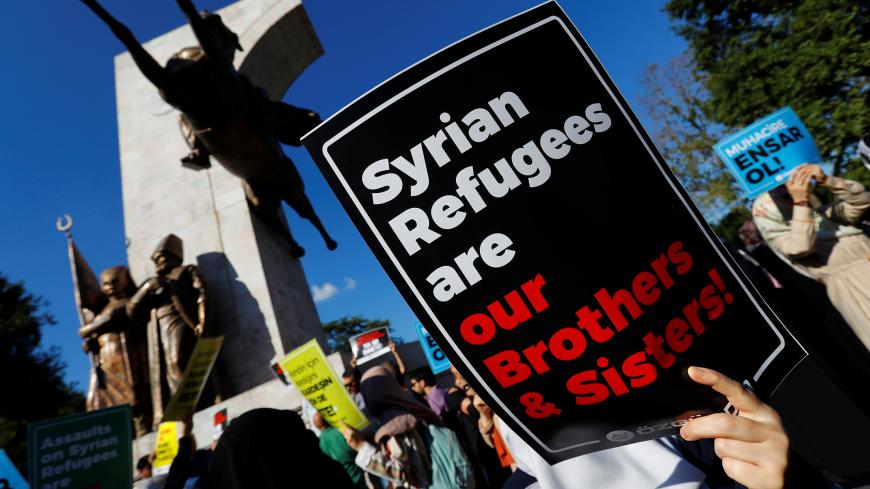 Picture this: The Turkish flag on a bright red background features a crescent and a star. Now replace the star with the image of a family holding hands and fleeing — and add threatening sharp teeth on the crescent facing the family. That was the image created by a Syrian living in the United States and shared on social media with the caption, “Syrian refugees in Turkey.” This image became a source of intense debate as news from Istanbul about mass deportations of Syrians back to war zones spread. Is Turkey becoming more dangerous for Syrians?

In early July, Turkish police conducted raids all around Istanbul focusing on businesses in Fatih, Esenyurt, Bagcilar, Kucukcekmece and Sultangazi — districts with a significant Syrian presence.

“The police is checking work permits and asking us questions about how long we have employed Syrians,” said a businessman who owns a textile business in Istanbul. He and others told Al-Monitor that some of their workers have been taken away since the beginning of July because they did not have ID cards. In mid-July, videos of young Syrian men handcuffed with plastic straps being bused out of the city were posted on English-language social media accounts. Although each story is unique, in most cases the men are Syrian and ages 18 to 45, and most do not have proper paperwork to reside in Turkey or more specifically in Istanbul. By talking to frightened Syrian families and their employees in Istanbul, Al-Monitor concluded that most of these men were first taken to a center to be processed. Some of them signed “voluntary return forms” and were deported to Syria from the Oncupinar border crossing.

Indeed, the Turkish government has been quietly enforcing deportations for the last couple of years while convincing most of these young men to sign paperwork that would show they are returning at their own free will. The paperwork is essential because it is against the Geneva Convention to return refugees back to war zones. However, if one refuses to sign such a document they can still be deported for other reasons, such as “working without a permit.” Many Syrians lack Turkish-language skills as well.

One staff member of a nongovernmental organization (NGO) who has been working with Syrians since 2013 through AFAD (Disaster and Emergency Management Agency) told Al-Monitor, “It is best to sign the voluntary return paperwork, but if not, there other ways and means to encourage return. We have to do this for the security of our country when the Islamic State publishes threatening videos declaring a Turkish wilayet [branch]. Only men with criminal records or who are illegal are deported.”

In the initial stages of the Syrian civil war, Turkish President Recep Tayyip Erdogan told his Syrian brothers to come to Turkey and welcomed them as guests who would be kept safe. Today, Turkey is home to the largest refugee population in the world, and the United Nations refugee agency, UNHRC, reports that 3.6 million of them are Syrians.

Starting in 2015, Turkey ended the open border policy. In early 2017, Turkey suspended registration of newly arrived asylum-seekers in Istanbul and nine provinces on the border with Syria. The March 20, 2016, agreement with the European Union made things all the more complicated for the refugees. Senay Ozden, a Turkish researcher who specializes in refugee studies refers to the deal as a “breach of the Geneva Convention.”

Deportations have been taking place for a while now, but what's new is the extent and harshness of the process. The Turkish owner of a carpet store in the Grand Bazaar in Istanbul told Al-Monitor, “They [the police] pick them [Syrian men] up at the bazaar like stray animals.”

Initially, most people did not want to believe Turkey would deport anyone to Idlib. A government defense official told Al-Monitor, “Turkey doesn’t want Idlib to empty out. So yes, I believe those with a criminal record, those who are without proper ID and suspected to be members of certain groups will be taken back. That's why currently they are only targeting young men.”

Families are left broken as the men are deported; women, children and the elderly are left behind. Is this the first stage of a new harsher policy? It could well be.

The latest polls show that "Syrianphobia" is at its peak. PIAR research center's July report presents a worrisome picture: 82% of respondents said, “I do not like the current policy, all Syrians should be sent back,” while 83% refuse to accept that Syrians are permanent residents of Turkey and proper integration policies are necessary; 72.5% said they approve the policies that ban Syrians access to the beaches and 73.7% approved of a decision to ban all aid to Syrian refugees.

On July 22, Istanbul governorate published an announcement asking all unregistered Syrians to leave Istanbul by Aug. 20. All official announcements since then have stuck with the line that only illegal immigrants are being deported while Syrians with temporary protection status are relocated to other cities. As the Turkish economy has deteriorated and the government brags about its aid to Syrian refugees resentment toward Syrians has grown. From brothers in need they have become unwanted guests. Syrians are portrayed as free riders who get free health care, college education and other services from the government, which has created a widespread perception that Syrians are potential criminals and a financial liability.

In July, the government announced that free health care services for Syrians would be suspended. These public perceptions are now reflected in the Justice and Development Party's (AKP) vote share as well. The AKP has lost a significant part of its Islamist base, as witnessed in most pious cities such as Konya and Gaziantep, as well as the Istanbul districts of Fatih, Kucukcekmece and Basaksehir. All this has generated significant consequences.

The Turkish public is at best indifferent to the mass deportations. On July 27, Islamist groups organized a protest in Istanbul, where people chanted, “Muslims, do not sleep, stand by your brothers,” warning the government against provocation by a handful of racists. They asked for sympathy for Syrians likening their situation to the Turks in Germany. The protest briefly erupted into a brawl as an ultranationalist group marched in chanting, “Happy is the one who says he is a Turk.”

This scene was indeed a reflection of the major split within the Turkish government. Two prominent ideologies have physically clashed: one pro-Muslim Brotherhood Islamist approach represented by the core of the AKP arguing to embrace all Muslims, the other ultranationalists who support Turkish nationalism and are staunchly anti-Arab.

One senior AKP official told Al-Monitor, “The AKP cannot continue the anti-Syrian stance because it will tear us apart.” The pro-Muslim Brotherhood AKP has risen to power with angry displays against the West and the secular Kemalists for forcing populations to assimilate. Now, we see the AKP government’s battle against not only the Kurds but also Arab shop signs.

The image of Syrian refugees in Turkey transforming from guests into problems is the result of the AKP government’s failure to enact effective policies for long-term integration. Syrians were expected to remain recipients of charity and leave as soon as possible. The Islamists and NGOs focused on refugee rights and human rights also failed to rally for the inalienable rights of the refugees.

Lacking proper legal refugee status, Syrians are going to face further hardship in Turkey as access to health care and education is curtailed. Syrian refugees' access to the job market is also limited because many do not have a work permit and work illegally.

The situation of Syrian refugees in the short term looks bleak. Their struggle to integrate into Turkish society may prove to be one of the most challenging legacies any incoming government will inherit from the AKP era. Yet both the AKP elites and ultranationalists know that neither Europe nor the United States have a better track record to preach Turkey about Syrians.