Anti-Arab sentiment on rise in Turkey 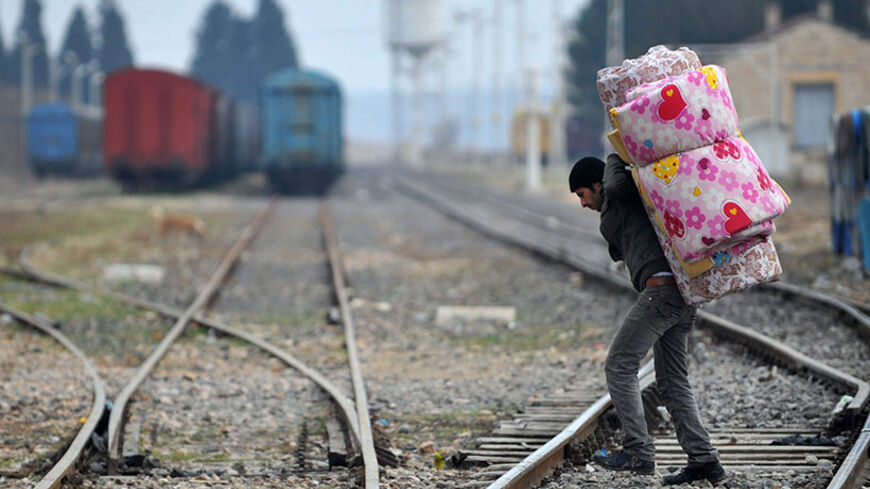 A Syrian refugee carrying his belongings passes over railway tracks after crossing the Syrian border in Karkamis, near the town of Gaziantep, Jan. 16, 2014. - OZAN KOSE/AFP/Getty Images

On Aug. 18, Gaziantep, a southeastern industrial city close to the Syrian border, was in a state of panic over a rumor that Syrians had poisoned the drinking water. Last month in Gaziantep and other border towns, protests were staged under the banner “We Do Not Want the Syrians.” The protests led to clashes with the police, physical assaults and vandalism against Syrian-owned businesses. Among the slogans heard were “Tayyip resign,” “City residents do not sleep, retake your city” and “We are the people of this town.” The media is full of sad stories about desperate Syrian, Iraqi and Yazidi refugees, but there is almost no coverage of mounting anti-immigrant sentiment or the increasing frequency of violence against immigrants.

After three years without an end to the conflicts in Syria and Iraq, citizens of Turkey have now begun to recognize that the refugees are here to stay. Calls by Prime Minister Recep Tayyip Erdogan for “patience and hospitality for our brothers who will soon be going back to Syria” are not resonating in many circles.

Ahmet, a local shopkeeper from Gaziantep, told Al-Monitor, “They are called ‘guests.’ OK, but for how long? We shared our food, clothing with them, and the government gave them priority in everything. When I go to the hospital, I have to wait in line and pay. They get it all free. They get assistance from the government. What do we receive in return? We pay higher prices on all goods. Theft is on the rise, and worse of all is the sexual harassment of our women. They cannot go out onto the street because they fear the Syrian thugs. We have had several cases of rape.”

Other locals appeared to agree with Ahmet. In their eyes, their Syrian “guests” live a government-subsidized life in Turkey, while citizens are made to pay the price. Ahmet’s neighbor Cemo, a butcher, told Al-Monitor, “Look around, sister. What do you see? All these signs in Arabic, and the government is paying them 1,000 liras [about $450] per month. They say they are escaping the war in their country. Well, too bad. We stayed in our county during our war and fought.”

After assorted clashes between Syrian refugees and the locals and some unfortunate murders, Gaziantep's mayor decided to relocate hundreds of Syrian families from the city. On Aug. 20, Syrian business owners who had put up signs in Arabic were warned by the municipality to obey Turkish display rules.

Are these the best policies to pursue? Mithat Kaynak, a respected columnist from Hatay, told Al-Monitor, “Relocating 400 families out of Gaziantep or other cities against their will is giving in to the growing tensions and racism.” If more residents from other towns protest, where will the Syrian refugees go? Do such policies tacitly endorse xenophobia?

Hanife Cetin, an expert from the International Relations and Strategical Analysis Center (TURKSAM), told Al-Monitor, “Since the beginning of the Syrian civil war in March 2011, Turkish Interior Ministry figures inform us that 1,385,000 Syrians have entered Turkey.” Cetin underlined the crucial point that this number only reflects those who have been registered.

Cetin explained, “The Turkish government had planned camps for about 100,000 ‘guests,’ and once the numbers swelled unexpectedly, the process got out of hand. In some towns, such as Kilis, the guest population is higher than the local population. Neither the city facilities nor the people are adequately prepared to handle this influx.”

An activist and seasoned journalist from Hatay, Bereket Kar, told Al-Monitor, “When we spoke of xenophobia in the last decade, we would be focusing mostly on European countries that blame immigrants for all the ills in their societies. Now we see that sort of sentiment on the rise in Turkey. The Justice and Development Party [AKP] should be held accountable for the hatred toward Syrians and other immigrants. Why make the poor refugees the scapegoat? Is it not the government’s ill-managed policies that we need to question? The issue is like a ticking bomb.”

Kar, a local resident, explained that only a small minority of Syrian refugees had access to preferential treatment in health care and social assistance. Still, locals find Syrians an easy target as they struggle with higher costs for rent and utilities because of rising demand and fight for fewer jobs because of the abundance of cheap labor in almost ever sector.

It is crucial to note that in the early 2000s, Turkey shifted from a country of emigrants into a county receiving immigrants. In 2013, Turkey ranked fifth in the number of applications from asylum-seekers, and it hosts the most refugees of any country in Europe. Meanwhile, atrocities of the Syrian civil war have spilled across the border, with terror incidents and jihadist fighters en route to Syria wreaking havoc in small border towns.

Xenophobia is not a recent phenomenon in Turkey. Decades of research have identified a persistent xenophobia streak. Although numbers vary slightly year to year, it is fair to conclude that only a minority of Turkish citizens are comfortable having Christian, Jewish, atheist or LGBT neighbors.

Given how “marginal” xenophobic movements on the far-right in Europe have flourished in the last decade, it would be wise to pay attention to the growing tensions in Turkey and its reflection in social media and the press. On Twitter, #Suriyelileriistemiyoruz (We Do Not Want the Syrians) has received the requisite xenophobic remarks. One tweet read: “We do not want even one single Syrian, let them go stay at the villas of Erdogan and [Turkish Foreign Minister Ahmet] Davutoglu.” This is interesting as it is common to hear Syrian beggars on the streets of Istanbul or Ankara shouting, “Davutoglu brought us here. Why would he not take care of us?” It appears that AKP policies have failed these refugees, who do not always have official refugee status, and local residents.

On the flip side, a counter hashtag, #KardesimeDokunma (Do Not Touch My Brother), appeared, mostly supported by political Islamists. Several Islamist nongovernmental organizations, such as IHH (Humanitarian Relief Foundation) and Mazlumder, diligently work to assist refugees. Also, Alevi communities have opened their prayer houses to host Syrians.

Talat Yesil, senior editor of the weekly magazine Ekonomist, told Al-Monitor, “As a native of the city of Hatay, I find the concept of enmity toward Arabs harsh and unfair. In Hatay, many people understand Arabic and are happy to host the refugees. It is the behavior of jihadist fighters that scares the locals and refugees alike in Hatay. However, in other cities, the language barrier could also be a factor causing violence.”

It is evident in the print media that those who do not approve of the AKP’s policies toward Syria have been harsh on the refugees. For example, the Aydinlik Daily, which is known to be associated with the Workers Party (IP), published a story titled, “Deport Them.” Spreading rumors about misbehaving refugees, adding fuel to the fire, generates further discrimination and resentment and normalizes violence against them.

So far, there are no organized movements, at least none that are visible, seeking to unite ultranationalists. It is difficult to find literature that brings together ultranationalist Turkish or Kurdish views with anti-immigrant sentiments akin to that in Europe, such as among Golden Dawn (Greece), Party for Freedom (Netherlands), Nationalist Socialist Movement (Denmark) or the National Front (France). Yet, unless adequate social, educational and economic precautions are taken, the basic justifications of anti-immigrant sentiments will continue brewing in Turkey.

The image of the rich, free-spending “Muslim brother” Arab tourist is being replaced by xenophobic attributes toward Arabs (read, Syrian) immigrants and refugees and immigrants in general.