European countries to Turkey: We pay, you keep Syrian refugees

Syrian refugees are the new ping-pong between EU countries and Turkey. 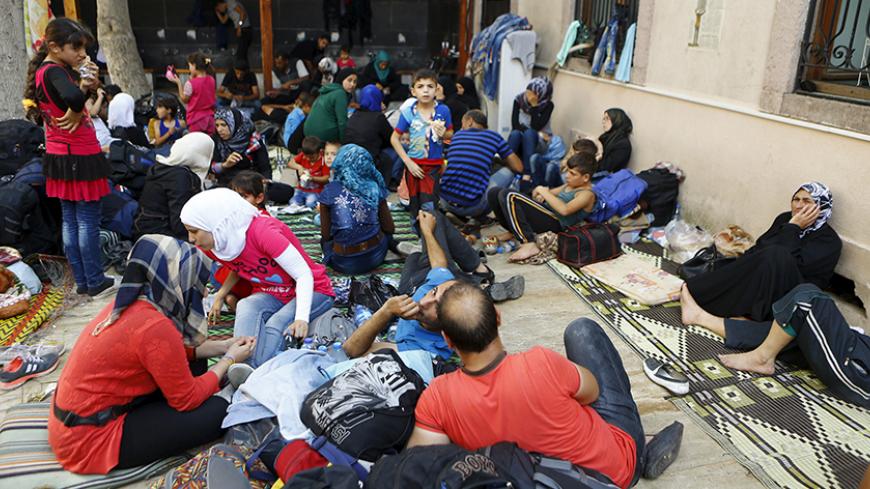 Syrian refugees spend the day in the port city of Izmir, in western Turkey, Aug. 10, 2015. Thousands of Syrians descended on the Aegean port city this summer before catching a boat to Greece, their gateway to the European Union. - REUTERS/Osman Orsal

European countries face an acute refugee crisis. According to the BBC, more than 100,000 people from the Middle East and North Africa reached the European Union’s borders in July alone. More than half a million are expected to arrive by the end of 2015. Yet, even after months of paralysis and several thousand dead refugees (more than 70 of them in the back of a truck in Austria on Aug. 27), Europe still lacks a coherent response to the plight of people fleeing war, famine and deprivation.

Last week, Denmark’s Liberal Party government offered to pay Turkey to halt Syrian refugees who want to come to Europe. German Interior Minister Thomas de Maiziere had a more humane suggestion: build camps in Italy, Greece and Turkey — the first stops for refugees whose ultimate destination is western and northern Europe — “to sort through migrants seeking asylum.” The German minister said Syrian refugees could go to EU countries from the Turkish camps based on the quotas that the European Commission assigned to individual member states.

Yet, many EU countries are still hostile to the idea of accepting more refugees. In the Netherlands, the government of Prime Minister Mark Rutte, under threat from ultra-right-wing politician Geert Wilders, declared it would cut off food and shelter for people who fail to qualify as refugees. Those people would then be either deported or sent away from refugee shelters “to fend for themselves." Britain’s ever Euro-skeptic Conservative government opposes the European Commission’s refugee quotas. The Danes hope to run “information campaigns” to deter potential refugees from Syria and North Africa, while Hungary just built a 110-mile barbed wire fence along its border with Serbia.

In one respect, EU countries’ xenophobic reactions are not surprising. For years, Turks in Germany, Moroccans in the Netherlands and Algerians in France served as shorthand for Europe’s failure to integrate immigrants. The arrival of hundreds of thousands of refugees on top of the millions of native-born foreigners, some of whom have lived in Europe for nearly a half-century, is bad news for European governments.

Not that countries formed by immigrants and refugees are immune to anti-immigrant or anti-refugee biases. Australia runs camps on its own territory and in neighboring Indonesia, Nauru and Papua New Guinea to detain all refugees who arrive by boat. Squalid conditions and alleged human rights abuses have pitted the Australian government against human rights watchdogs at home and abroad. In the United States, the businessman Donald Trump, who could become the Republican Party’s nominee for president in 2016, runs on an anti-immigration platform.

But even such contextualization does not fully explain EU countries’ reluctance to own their refugee problem. In fact, as the earlier quote from the German interior minister suggests, European leaders do not even see a “refugee crisis” — they label the Middle Eastern and African folks coming into their countries as “migrants,” not “refugees."

Basak Kale, professor of international relations at Middle East Technical University in Ankara, believes this wordplay is deliberate. By calling refugees migrants, European leaders give the impression that the people who are coming into their lands do so only voluntarily and temporarily. Kale, an expert on the EU and EU-Turkish relations, told Al-Monitor why she is not impressed with Berlin’s “distribution camp” proposal. She said, “How could Europeans think they could choose which refugees they want? There is no such option under the 1951 Geneva Convention on refugees. Given the situation in Syria, people fleeing that country automatically become refugees. Yet EU countries want to ‘pick’ refugees like it’s a beauty pageant — you’ll be taken in if you’re a 30-year-old doctor but left out if you’re an illiterate and sickly 70-year-old.”

Although Kale appreciates the odds that European governments face — the uncertain prospects of the euro, continuing economic recession and the rise of right-wing parties and xenophobia — she takes them to task, saying they should at least host a comparable number of Syrian refugees as the 4 million who are living in Turkey, Lebanon and Jordan. By comparison, Germany and Sweden, the most welcoming EU countries for Syrians, in 2014 accepted 58,000 and 26,000, respectively. In a positive turn of events, Germany recently announced that it would dramatically increase the number of Syrian refugees it accepts.

That is good news for Turkey. At the moment, rising violence and political uncertainties undermine Turkish institutions’ ability to assist the ever-increasing number of Syrian refugees or stem the departure of those who want to risk the dangerous trip to Europe. While there is no end in sight to the tragic civil war in Syria and the wisdom of forming “distribution centers” in Turkey is up for debate, at a minimum, better burden-sharing between EU countries and Ankara could alleviate the suffering of innocent Syrians.