Why Paris attacks will create backlash for migrants in Europe

The recent attack in Paris by the Islamic State, and claims that one of the attackers held a Syrian passport, reignited the issue of the return of Western jihadi fighters to their countries in Europe. 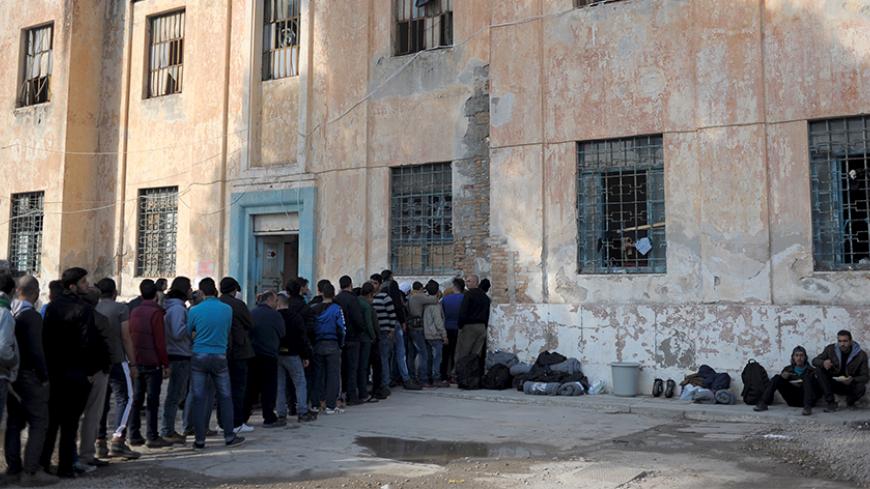 Refugees and migrants line up during free food distribution at a temporary camp on the Greek island of Leros, Nov. 15, 2015. The holder of a Syrian passport found near the body of one of the gunmen who died in the attacks in Paris was registered as a refugee in several European countries last month, authorities said. - REUTERS/Fotis Plegas

AMSTERDAM — The world did not need to speculate long to find out why the Islamic State (IS) randomly killed at least 129 people and wounded hundreds in Paris, most of them young adults in the prime of their lives. In an online statement released the day after the attacks, the group explained its motives, in line with its usual habit of claiming responsibility for attacks. IS claimed that the attacks were meant as revenge for Paris’ participation in the US-led coalition of nations, which bombs IS.

However, the statement also revealed another reason why they targeted a soccer stadium, a number of cafes and restaurants, as well as a rock concert: because Paris is “the capital of prostitution and obscenity.” The young Parisians who died during the attacks were labeled in the statement as “crusaders,” as well as “apostates” who had gathered in a “profligate prostitution party.” The term crusaders apparently, according to IS, refers to indigenous non-Muslim Parisians, while the term apostates apparently refers to Parisians with an Islamic background. To IS, it makes no difference; in their eyes, they are all sinners deserving death.

They added, “The result of the attacks was the death of no less than 100 crusaders and the wounding of more than those, and unto Allah is all praise and gratitude.”

But these motives might not be their most important goals. Apart from more short-term motives, such as retaliation and the killing of those it regards as sinners, the attacks also might fit into the more long-term strategic goals of the group, which are to sow chaos and to create a backlash against Muslims living in or migrating to the West. This would fit in well with the strategy that has been outlined in a document written by al-Qaeda strategist Abu Bakr Naji titled “The Management of Savagery: The Most Critical Stage Through Which the Umma [Islamic Nation] Will Pass” and which is reportedly mandatory literature for IS commanders as well.

In the document, Naji describes the need for jihadi groups to launch terrorist attacks in order to create as much havoc and chaos as possible. This chaos will not only terrorize its enemies, but it will also create a more polarized environment; it forces people to choose sides, creating an “us vs. them” situation, which is more attuned to the jihadi narrative and in which the jihadi fighters can more easily thrive. Because in this chaos people constantly live in the fear of death, the thinking goes, they will become more receptive to the jihadi religious message of holy war and martyrdom. As such, the strategy aims to fundamentally reshape the environment, making it easier for IS to spread its message and to expand.

The attacks in Paris will have consequences for the refugee debate in the West, an outcome that might not have been intended but which could benefit IS. After the attacks, it emerged that one of the attackers carried a Syrian passport, probably a fake one, and registered as a refugee in Europe, the Wall Street Journal reported, and that six of the attackers had traveled to Syria before. For years, there have been discussions in Europe on whether Western jihadi fighters pose a security threat back home. And for a couple of months, this debate has focused on whether these jihadi fighters — Western or Middle Eastern militants from IS — use migrant routes to return to Europe.

However, many European countries, particularly Germany, showed an overall welcoming attitude toward the refugees, especially those from Syria. Until now, almost 800,000 refugees entered Europe illegally. This number is expected to rise to 1 million refugees this year, with another 3 million next year. This seems to contradict IS’ vision of a world in which believers and unbelievers can only be in a state of war with each other.

“If Europe cannot control its borders, we will see the return of barbed wire and walls between us,” French President Francois Hollande said.

Also, some European refugee shelters immediately got extra security guards, as people expected revenge attacks from the far right. Since the start of the European migrant crisis this summer, the European right-wing parties gained a lot more support as a result of their anti-immigration agenda. In The Netherlands, for example, the party of Geert Wilders is now leading the polls. Wilders’ Freedom Party is well-known for its anti-Islam and anti-immigration rhetoric.

Obviously, the refugee crisis in Europe has not gone unnoticed within the ranks of IS as well. In an issue of Dabiq, the IS online propaganda magazine, the group published an article in which it used the death of Aylan Kurdi, a Kurdish boy who drowned after his boat capsized on the way to Europe, to brand migrants as “apostates.”

The article stated the following, “It should be known that voluntarily leaving Darul-Islam [the land of Islam] for darul-kufr [the land of unbelief] is a dangerous major sin, as it is a passage towards kufr [disbelief] and a gate toward one’s children and grandchildren abandoning Islam for Christianity, atheism or liberalism.”

IS would rather not see refugees leave the region, nor does it want them to be sheltered by a welcoming Europe, where, as they say, they will find themselves “under the constant threat of fornication, sodomy, drugs and alcohol.” It may not have been their main goal, but one could suspect that IS wants to exploit the refugee crisis in order to sow division, increase existing tensions and more sharply polarize Europe. This undoubtedly benefits IS, which seeks to create chaos and a religious war between Muslims and non-Muslims.