Turkey has relaxed its harsh policies on Syrian refugees while it reaches out to Europe for more assistance, but the move does not mean Ankara has given up on expelling as many as it can. 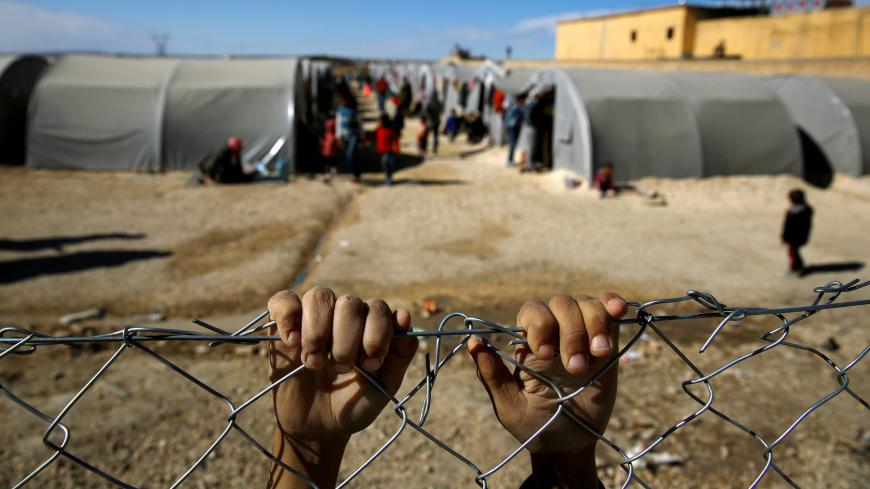 A Kurdish refugee boy from the Syrian town of Kobani holds onto a fence that surrounds a refugee camp, Suruc, Turkey, Nov. 3, 2014. - REUTERS/Yannis Behrakis

I received a text message from a senior Justice and Development (AKP) member as President Recep Tayyip Erdogan addressed his party’s delegates on Sept. 5. It read, “Are you watching? Wait to see how Erdogan will threaten [US President Donald] Trump through the EU. Let me know what you think.”

Erdogan explained if the United States does not agree to work with Turkey on a Syrian safe zone, Turkey will go ahead with it on its own. He announced the deadline as the last week of September, explaining what a burden 3.6 million Syrian refugees have become for the country and that Turkey cannot be forced to carry it alone. He stated that the goal is to relocate at least one million Syrians into the safe zone, saying, “We spent $40 billion so far” and that the EU’s aid was only around three billion euros ($3.3 billion). Erdogan said he provided detailed construction plans for homes with gardens in the safe zone for relocated Syrians. He suggested that Western powers had embraced the idea and it was time to act.

Erdogan concluded the speech by emphasizing that if the safe zone was not established, Turkey would be forced to open the gates to Europe. He complained about the EU and other countries paying lip service to the struggles of Syrian refugees but not picking up the tab.

In July, Al-Monitor reported about the forced deportations of Syrians, particularly from Istanbul. Unregistered Syrians were given until Aug. 20 to leave the city. The Interior Ministry quietly announced that the deadline was extended until Oct. 30 and that Turkey had recalibrated its refugee policies. Almost all restrictions were relaxed. The harsh deportation policy is gone and the new guidelines are much more flexible.

The Turkish public is now largely adamantly anti-Syrian, and one of the main reasons it supports the "safe zone" is the oft-repeated goal of Syrian refugees leaving Turkey for the area. So why did the government abruptly soften its refugee policy? What happened in a month?

Al-Monitor spoke with senior AKP officials who are close to the palace about the change. They referred to a “fine tuning” rather than a change in policy and named three key factors in the decision.

First, there was a strong Islamist reaction to the public roundup and deportation of Syrian refugees. As Erdogan’s former allies become his potential challengers, Erdogan is feeling pressure from the shrinking number of Islamists still loyal to him. In the last election, although the AKP won the cities with high numbers of religiously motivated voters, it lost a significant number of votes in each of them. And in the June 23 Istanbul re-election, the AKP's most devout districts voted for the opposition.

The Metropoll polling agency’s August 2019 report put Erdogan’s approval rating at 44%, a 10% decrease in one year.

Several Islamist nongovernmental organizations, including Humanitarian Relief Foundation, the Turkish Religious Affairs Directorate (Diyanet) and religious orders such as the Menzil group have been heavily involved in Syria. Prominent Islamists have called Syrian refugees “God’s blessings.” Chasing, handcuffing and deporting Muslim refugees is seen as unIslamic. Indeed, Erdogan started his “we will be forced to open the gates” speech on by saying, “We have been blessed to be ansar but we could have been muhajir as well,” a reference to the local inhabitants of Medina who took the Prophet Muhammed and his followers into their homes and protected them. Welcoming Muslim immigrants (muhajir) in distress is seen as a duty in Islam. Deportation of Syrians to war zones is seen as a potential threat that could end the AKP's raison d’etre.

Although pro-AKP media outlets refrained from publishing news and photos of the deportations, many conservative elites and senior members of religious orders were disturbed. It is a group that Erdogan cannot afford to alienate.

Next, Erdogan would really like to see the European Union and United States share the burden. It has been his quest since the beginning of the Syrian civil war, and as Gulf countries pulled their support of opposition groups in Syria, Erdogan’s only option has been to increase pressure on the West. Erdogan told his party members that “350,000 Syrians have already gone back home” but these numbers are not sufficient. The European Union's fear of an influx of refugees helps Erdogan on multiple levels, potentially increasing the funds arriving to support the refugees and elevating Turkey to Muslims' last, best hope. Either way, keeping the Syrians visible in major cities of Turkey makes them a political tool Erdogan can use to his advantage. Even though Ankara knows the “opening the gates” gambit will not get its security zone demands completely filled, the threat is enough to make EU capitals shiver. The stronger anti-immigrant groups become in the West, the more Erdogan can charge to host immigrants in Turkey.

Finally, the possibility of deportation helps Turkish authorities keep Syrian and other refugee populations in check and as the visibility of Syrians in Turkey increase, the ultra-nationalists gain support. Misleading news about Syrian crimes and false reports about the benefits paid to them get significant attention. News about towns where a majority of residents are Syrian help solidify Turkish nationalists, right-wing voters who have been in alliance with the AKP since the establishment of the presidential system. Political science professor Ersin Kalaycioglu at Sabanci University in Istanbul said in an interview with Medyascope, “An anti-immigrant party based on refugee hatred might emerge in Turkey, that potential exists.”

Ankara has not changed its mind on relocating Syrians, but is entertaining multiple options. Al-Monitor’s interviews indicated that Ankara remains committed to removing as many Syrians as possible.

The AKP’s short-sighted Syria policy since 2010 is the reason Turkey now hosts the highest number of refugees in the region. Turkey will have to face the legacy of the Syrian civil war and design policies not just to host but to integrate displaced Syrians. A small percentage may return to Syria or reach the EU, but most are going to stay in Turkey. Erdogan’s plan to build houses with little gardens in the safe zone cannot even find support among AKP elites and is ridiculed behind closed doors.