At a cost of $500 million each month, Turkey staggers under growing refugee burden

Turkey’s spending on refugees has soared by an astonishing $1.5 billion in three months, and that figure doesn't include many other related costs. 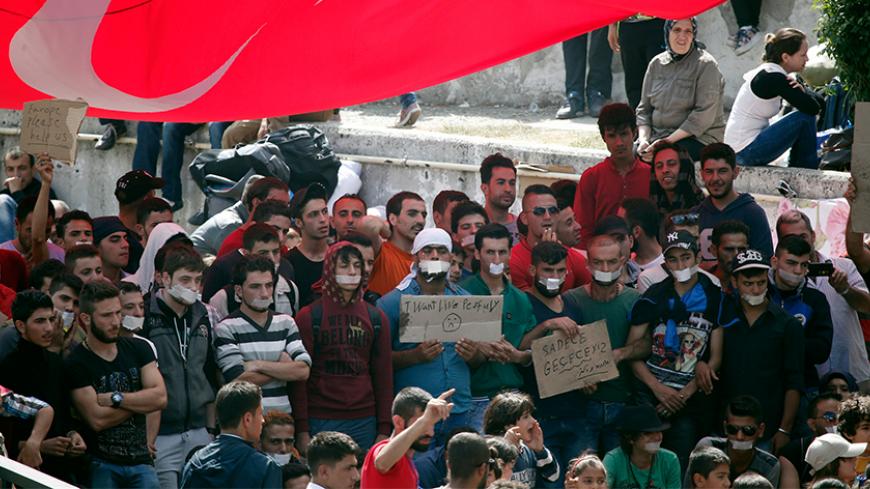 A crowd of migrants, mostly from Syria, wait at the main bus station under a Turkish flag stretched above them in Istanbul, Sept. 17, 2015. - REUTERS/Yagiz Karahan

On July 9, during an address to foreign ambassadors in Ankara, President Recep Tayyip Erdogan said Turkey had spent more than $6 billion to take in 2 million refugees, including 1.7 million Syrians and 300,000 Iraqis.

On Oct. 5, at a business gathering in Belgium, he noted Turkey’s spending for refugees has exceeded $7.5 billion.

How did the refugee bill swell by $1.5 billion in three months? To better grasp this staggering increase in such a short time, it’s worth recalling that the $6 billion was spent over four years. Are the figures inaccurate, or has the number of refugees shot up beyond what is publicly known?

There is nothing wrong with the financial figures. The main factor behind the skyrocketing sum is the abrupt increase in the number of refugees.

In July, Erdogan had put the number of Syrian refugees at 1.7 million, while in his Brussels speech in early October he spoke of 2.2 million Syrians. This means another half-million Syrians have crossed into Turkey in the past three months.

Metin Corabatir, head of the Ankara-based Research Center on Asylum and Migration, said the initial cost of newcomers is quite high. “They are being accommodated, undergoing medical checkups, etc. There are too many expense items. Even those arrested [while attempting to cross] the Aegean create expenses,” he told Al-Monitor.

Umut Oran, a member of the opposition Republican People’s Party (CHP) who closely follows the refugee issue, said, “Hundreds of thousands of new refugees arrived in the past several months. The rising number is swelling the expenses. With winter approaching, new costs related to heating, clothing, accommodation and health care have emerged. And with the beginning of the new school year, 200,000 Syrian children began attending school, which means extra spending.

"The burden of the refugees is rising to levels beyond Turkey’s capacity.”

With the Turkish economy already in trouble, it can hardly endure an additional $500 million per month, or $6 billion per year, for refugees. And the situation is likely to get worse. Foreign Ministry spokesman Tanju Bilgic sounded the alarm Oct. 9 that Turkey could soon face a fresh influx of Syrians.

“Russia’s air raids could trigger a new wave of migration," Bilgic said. "We are worried by this issue."

Yet, Turkey’s official policy on refugees remains unchanged. “We’ll maintain our open-door policy,” Erdogan confirmed in Brussels, where he also noted that the international community has contributed only $417 million toward the problem.

Though Turkey is not directly a party to the war, its economy is under an ever-increasing strain. “This is not sustainable. We expect a genuine burden-sharing by Europe and the international community,” Erdogan said in the same speech.

An EU proposal for 1 billion euros ($1.14 billion) in assistance for Turkey to deal with the refugees drew a harsh reaction from Prime Minister Ahmet Davutoglu. Turkey isn't asking for a handout, he said.

"What needs to be done is a fair burden-sharing. [The funds] will go not to us, but to the Syrians,” he said Oct. 15. “It’s not about granting a favor to Turkey. If they [Europeans] don’t want the Syrians to go [to their countries], we have to act in line with the reality that this is a common problem.”

Three days later, German Chancellor Angela Merkel paid a brief visit to Istanbul to discuss the issue. The Turkish side asked for 3 billion euros ($3.41 billion) in assistance for refugees, in addition to three demands: that the EU abolish the visa requirement for Turkish citizens, open new negotiations regarding Turkey’s EU accession and allow Turkey’s participation in EU summits. Merkel said Germany would support Turkey on these issues.

Ankara wants the EU to share the cost of any new camps to be built for the Syrians. Earlier, Turkey had suggested creation of a safe zone inside Syria to build container cities for the refugees.

The bill for Turkey is not limited to the costs of refugees. In remarks to Al-Monitor, CHP Deputy Chairman Faik Oztrak, a former treasury undersecretary, said the Syrian crisis has become a tangle of multifaceted problems for Turkey. He stressed that the actual burden on the treasury is bigger than the publicly cited figures.

“This issue is affecting Turkey with its security, humanitarian and social dimensions on one hand, while growing into a serious economic problem on the other,” Oztrak said. “We have learned from recent statements that the money spent [on refugees] has exceeded $7.5 billion. However, we have serious losses also in terms of exports because of this crisis. According to our calculation, the loss just in potential exports in the 2011-2014 period to the Syrian market stands at $6 billion. The people who used to come as tourists are now coming as refugees, and the loss in potential tourism revenues amounts to $1.6 billion.”

Ankara expects Europe to alleviate Turkey’s burden by also taking in a share of the 2.2 million refugees. Europe currently hosts only 250,000 refugees. Speaking a day after Merkel’s visit, Davutoglu said, “No one should expect Turkey to become a country holding all refugees like a concentration camp.” The financial needs, he added, could exceed the request for 3 billion euros.

Even 3 billion euros is unlikely to stop the refugee flow from Turkey’s Aegean coasts to the nearby Greek islands. Merkel seemed well aware of the urgency of the situation when she acknowledged in Istanbul that the refugee wave to Europe could grow.