The monthly bill of hosting the Syrian refugees in Turkey has shot up to $500 million, in a further strain on the country’s already struggling economy. 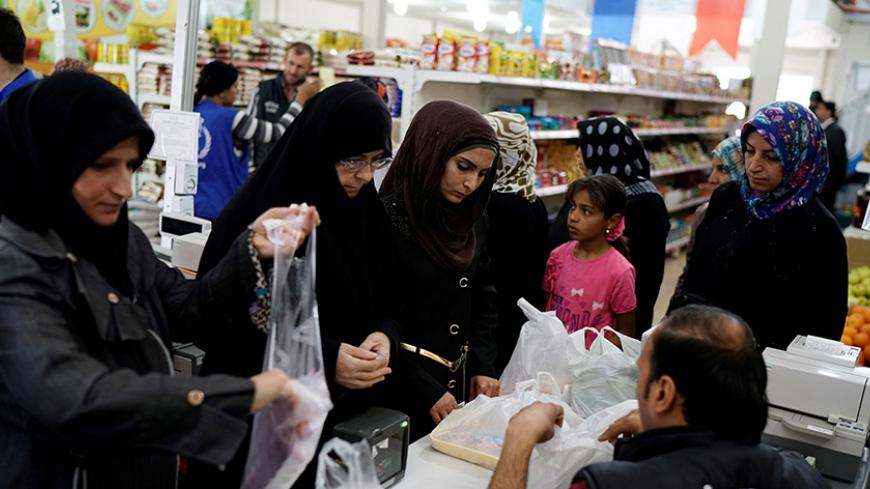 To turn a blind eye to the ordeal of the Syrian refugees and leave them to their fate is impossible. For Turkey, therefore, the financial burden of hosting the Syrian refugees is growing by the day, along with the refugee numbers, as the country now holds the title of the top refugee host. As Turkey's tourism and export revenues are falling, the money the country spends on the refugees keeps going up, raising questions on how long this situation can continue.

Turkey’s monthly spending on refugees has reached $500 million, a figure not limited to exceptional periods but apparently now the norm. In the eight months from July 2015 to February, the average monthly spending on refugees stands at $500 million, according to figures compiled from public statements by President Recep Tayyip Erdogan and the head of the Disaster and Emergency Management Authority (AFAD).

On July 9, 2015, Erdogan said Turkey had spent a total of $6 billion on refugees. The sum covered the period from 2011, when the influx of Syrians began, to June 2015. On Oct. 5 the same year, Erdogan put the figure at $7.5 billion, which meant another $1.5 billion had been spent over a period of three months, reaching an average of $500 million per month.

AFAD Chairman Fuat Oktay provided the latest update March 2, in a meeting with journalists from European Union countries. He stressed that the Syrians in Turkey benefit from free health care and free schooling for their children, and that the 26 refugee camps in the border regions met “all physical, social and psychological needs” of their inhabitants. He then disclosed the bill, saying, “Turkey has spent about $10 billion on Syrian refugees [to provide conditions] in line with UN standards.”

Analyzing the figures, the spending in the first five years — from 2011 to the end of 2015 — emerges as $9 billion. Meanwhile, in the past eight months, the spending stands at $4 billion, meaning that the monthly average has reached $500 million. If spending continues at the same pace, the yearly figure will hit $6 billion at the end of 2016, compared to the total of $9 billion, or $1.8 billion on average per year, in the first five years. This would mean that annual spending will have increased three times since the initial stages of the influx.

So, why is spending on the rise? In his statement on July 9, 2015, Erdogan put the number of Syrian refugees at 2 million. In October, he said the number had reached 2.2 million. On March 5, speaking in a teleconference organized by a US-based nongovernmental organization, Oktay said Turkey was hosting 2.75 million refugees. Hence, 750,000 more Syrians have joined the existing refugee population over the past eight months, which emerges as the main factor pushing the spending up.

In short, the Syrian refugees, with their growing numbers, remain a “black hole” for the Turkish economy at a time when it is already struggling under the impact of regional turmoil, the crisis with Russia and simmering violence in the country’s Kurdish-majority southeast.

In his May 5 column, Hurriyet’s Ertugrul Ozkok drew attention to the swelling bill of hosting refugees in a country where millions of citizens depend on social benefits. “We have a generous state. Let’s be proud of it but let’s also know [the facts] so that the Europeans and other rich nations know as well,” he wrote.

In remarks to Al-Monitor, former Minister of State Aydin Tumen said the 3 billion euros the EU has pledged in support of Turkey’s refugee effort was not enough. “Everyone involved in the Syrian issue must share the burden. We are a neighboring country and faraway countries are unaware of the hardship we are going through,” he said. “We can’t look after those people forever. The Turkish economy can’t carry such a big burden on its own. Some other formula should be found.”

Tumen slammed the Ankara government for still resisting a Syrian solution involving President Bashar al-Assad, despite the international trend on the contrary. “The burden on the Turkish economy will grow even bigger unless a political solution is quickly found,” he warned.

But does it mean the Syrian refugees have had no positive impact at all? Remarkably, they have. International credit-rating agency Standard & Poor’s said last week that the refugees have contributed to Turkey’s economic growth. According to agency analyst Frank Gill, the refugees have boosted consumption by spending earnings from illegal work and savings, and have the potential to raise Turkey's headline growth by 0.2 to 0.3 percentage points annually.

Yet, the refugees might boost not only economic growth but also the governing Justice and Development Party (AKP). In 2019, Turkey is scheduled to hold three elections — municipal, parliamentary and presidential. By then, 1.9 million refugees will have completed their five-year residence in Turkey, becoming eligible to apply for citizenship. And those who get it are expected to repay the AKP’s favors at the ballot box.