Turkey’s economy is on a worrisome course as tourism and export revenues fall. 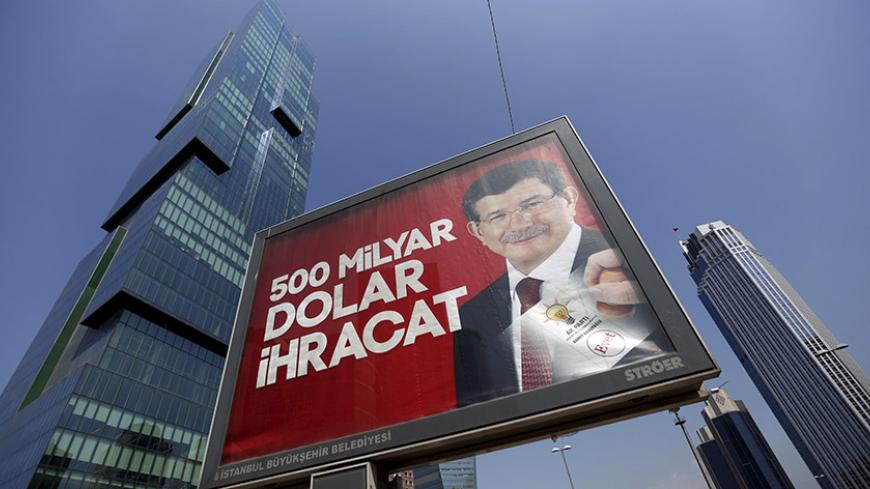 Turkey’s economy has entered a critical period. The prospect of snap elections remains alive despite six possible ways to form a coalition or minority government from the hung parliament the June 7 polls produced. The political impasse is already having a negative impact on economic indicators, atop the bruising effects of Russia’s economic crisis, civil strife in neighboring countries, the blockage of Turkey’s export routes to the Middle East and Africa, the prospect of the Fed hiking interest rates and the falling euro-dollar parity.

While Turkey’s revenues are decreasing, the burden of Syrian and Iraqi refugees has opened a virtual “black hole” in the economy. President Recep Tayyip Erdogan put the refugees’ bill at $6 billion, in a reproachful speech to foreign ambassadors in Ankara on July 9. “We are currently hosting 2 million people, including 300,000 from Iraq and 1.7 million from Syria,” he said. “The money we have spent for Syrians so far has exceeded $6 billion. But we have received only $400 million [in support] from international sources. Yet we’ll never withdraw our helping hand.”

It’s hard to predict how much more Turkey will spend on the refugees as their number keeps growing amid continuing bloodshed in Syria and Iraq. In the same speech, Erdogan said over 20,000 Syrians had crossed to Turkey in the first two weeks of June amid fighting in Tell Abyad, while the number of those who came from Kobani had reached 190,000.

Turkey is willing to sustain its humanitarian assistance, but it needs greater funding to do that. Thus, the economy has to grow and strengthen. But is the economy growing?

That Turkey will miss its economic targets this year is already a foregone conclusion. In remarks last week, Finance Minister Mehmet Simsek said the prospect of snap polls was taking a toll on the economy, with the outlook deteriorating and the 4% growth projection under growing risk. He stressed that political uncertainty could force the private sector to defer investments, adding, “Ongoing political uncertainty could lead also to an increase in Turkey’s international risk premium, make the depreciation of the Turkish lira permanent and even cause a certain hike in interest rates.” The minister spoke of risks also to the current account deficit and the tourism sector.

The current account deficit, a long-standing Turkish woe, was $3.99 billion in May, above expectations, and $44.7 billion on a 12-month basis, up from $44.3 billion last year.

The World Bank has warned that Turkey’s economic outlook for 2015 depends on the resolution of post-election political uncertainty, which, it said, has already created downside risks to growth. The bank kept its 2015 growth forecast for Turkey at 3%, but revised downward its 2016 and 2017 projections from 3.9% and 3.7% respectively to 3.5% for both years.

The problem with growth stems from the decline in exports, which owes to lower demand in Europe, the primary buyer of Turkish goods, as well as in Russia and the Middle East. Turkish exports stood at $150.8 billion on a 12-month basis in June, down from the yearly total of $157.6 billion last year. Economy Minister Nihat Zeybekci has said the global appreciation of the dollar and the fall in commodity prices could result in a decline of up to $20 billion in Turkish exports in 2015.

Former Finance Minister Zekeriya Temizel, now a parliament member for the main opposition Republican People’s Party (CHP), told Al-Monitor that 2015 could be completely lost due to the prospect of snap polls.

“Local and foreign investors are anxious over the possibility of early elections. They hope for the formation of a government that would give confidence to the markets. Also, foreign capital inflow is needed, as Turkey has to roll over a current deficit of about $45-50 billion and a debt of some $132 billion maturing this year,” Temizel said. “Thus, the speedy formation of a government capable of structural reforms is important. Early elections will mean Turkey wasting another eight months. Yet if one lacks any [real] intention to form a coalition, one should not waste further time [to go to snap polls].”

The Economy Ministry’s data backs up Temizel’s worries. In the first four months of the year, foreign direct investment stood at $4.03 billion, down 22.6% from $5.2 billion in the same period last year.

The situation in the tourism sector is not promising either. Bookings in Turkey’s tourism facilities are usually made in euros. The fall in the euro-dollar parity, coupled with a decline in the number of Russian tourists, has led to a bleak prospect for the sector, with revenues expected to fall for the first time in five years after a stable increase since 2010. Last year, the tourism sector had generated $34.3 billion, up from $32.3 billion in 2013, $29 billion in 2012, $28.1 billion in 2011 and $24.9 billion in 2010. The head of the Turkish Hotels Federation, Osman Ayik, estimates tourism revenues will be down by $5 billion this year.

The ill use of privatization revenues is another factor increasing economic fragility. CHP lawmaker Umut Oran, who closely follows the economy, believes privatization programs under the 13-year rule of the Justice and Development Party (AKP) have been a fiasco.

“Privatizations during the 1986-2002 period were worth $8 billion in total. In the 2003-2015 period under the AKP, this figure reached $61.8 billion with the sell-off of state-owned ports, factories, various facilities and valuable land. But instead of being funneled to new investments, those revenues were used to repay debt and bridge deficits,” Oran told Al-Monitor. “Still, the total budget deficits in this 13-year period amounted to about 300 billion Turkish lira [$110 billion] and the state’s debt stock rose to 650 billion Turkish lira [$238 billion], a figure 2.5 times higher than in the previous 80 years, while the [overall] growth rate of 4.7% fell behind previous periods.”

The government is still turning a blind eye to the economic downturn. Having ruled Turkey for 13 years on its own, the AKP refuses to concede defeat, pondering a fresh arm wrestling with the opposition instead of seeking a broad-based coalition government to calm the markets as soon as possible.