Early indicators show that Turkey's economy has begun to contract in the third quarter for the first time since 2009, raising the threat of political consequences for the AKP. 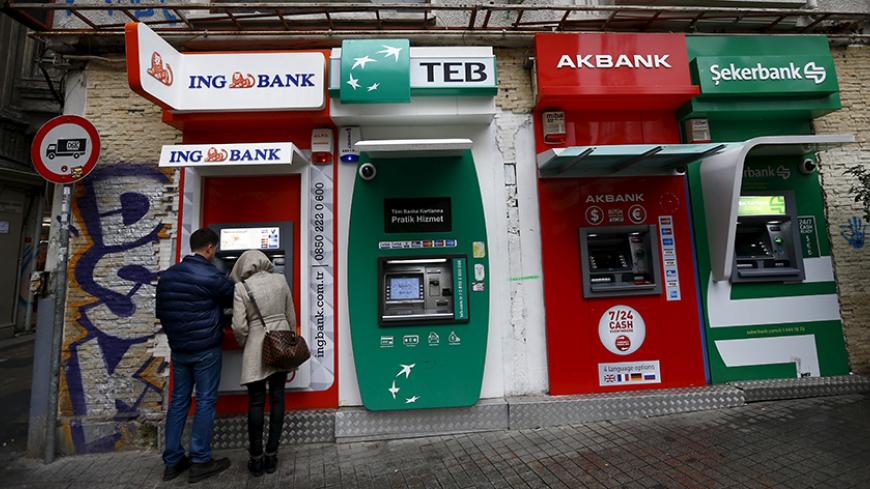 People withdraw money from an ATM at the main shopping and pedestrian street of Istiklal in central Istanbul, Jan. 30, 2016. - REUTERS/Murad Sezer

Toward the end of the year, when the time comes to disclose Turkey's growth rate in the third quarter, the Turkish Statistical Institute is expected to announce the country's worst rate for the past 27 quarters. The signs are already there, growing clearer every day. In its latest report on Turkey, the International Monetary Fund has already said the year-end rate would be below 3%, a projection that is likely to be revised further downward.

The growth figure for the third quarter is likely to be negative and around 0.5%, meaning that the Turkish economy is contracting for the first time since mid-2009. Moreover, a series of indicators point to a continued slowdown thereafter. In short, the spring for the Turkish economy is over, and it is transiting to a fall season of an unknown length. Whether the fall will give way to winter or a serious crisis also remains unclear.

Economic growth has been a key booster of popular support for the Justice and Development Party (AKP) since it came to power 14 years ago. The AKP's rise coincided with growth rates reaching 7% in its early years in power. The government managed to overcome the snags of the 2008-2009 global crisis and then crowned its rule with a 9% annual growth in 2010 and 2011. Since then, the economy has been on a slowdown course, with the average growth rate falling to 3% in the 2012-2015 period. For 2016, even the revised target of 3.2% is now beyond reach, and Ankara will likely make do with a rate of about 2.5%. The 4.4% target for next year is an ambitious one and comes with a big question mark.

The latest data on industrial output, industrial turnover and retail sales comes as a strong indication of contraction in the third quarter from July to September, which covers the July 15 coup attempt and its aftershocks. In addition, current account deficit data disclosed last week shows that this chronic problem has begun to worsen again, signaling another negative impact for future growth.

In the third quarter, industrial production (seasonally and calendar adjusted) decreased 2.7% from the same period last year. The steepest decline — nearly 3% — was in the durable consumer goods category, which includes domestic appliances, home electronics, furniture and automotive. Given that the industry's performance is a determining element in the performance of the commerce and services sector, the decline in industrial output could be described as the strongest indication of negative growth in the third quarter.

The data on the consumer side also shows that the economy has entered a period of contraction. In September, industrial turnover was down 2.4% from the same month last year. Retail sales, which had decreased 7.5% in July before picking up in August, are seen back on the decline, with the largest decrease again in durable consumer goods.

The retail sales volume, which covers all shopping malls and commercial enterprises of certain size, also points to a significant decrease in sales in the third quarter, including many sub-categories in which sales have fallen behind last year’s figures. Overall, the seasonally and calendar adjusted retail sales volume in the third quarter was down 1.7% from the previous one.

Besides the weakening tailwinds from the consumer side, the investment front provides no impetus as well. The steep investment decline in the past several years shows no sign of improvement in the third quarter of 2016. As of September, the annual output in the intermediate goods industry grew only 0.6%, while capital goods production decreased by 2.3%. The import of intermediate goods in the first nine months also remained unchanged from the same period last year, amounting to about $80 billion. A similar stagnation was seen in the import of capital goods. All those indicators point to lack of activity in terms of investments, as both local and foreign entrepreneurs remain wary of putting money in Turkey amid political and geopolitical risks, in addition to economic fragilities.

Foreign demand also fails to provide tailwind for the Turkish economy. In the first nine months, Turkey’s exports declined almost 3%, while imports were down 6.5%. The foreign trade deficit stood at $42 billion, a 15% decrease from the same period last year, in which the low global energy and commodity prices were also influential. As of the end of September, the foreign trade deficit and the one-third decline in tourism revenues contributed to a renewed increase in Turkey's current account deficit, which reached $32.4 billion on a 12-month basis.

This outlook indicates that the link between economic growth and foreign trade has further weakened, meaning that foreign demand is not stimulating growth. Ankara not only lacks a viable economic policy to reverse this trend, but also pursues an ill-conceived foreign policy route that causes significant losses in foreign markets.

The European Union's share of Turkish exports remains the largest at 48.5%, but is stagnant. Trade with the EU could take a further hit from growing political tensions over Ankara's affront to democracy. Market losses in the Middle East, meanwhile, continue to expand. In the first nine months, the share of Middle Eastern countries in Turkish exports fell from 22% to 21.3% as exports declined to some $22 billion, a 5.7% decrease from the same period last year.

The downturn observed in the third quarter continues in the fourth one, as October figures indicate.

The slowdown in the inflow of foreign capital — the result of Turkey's climbing risk premium and downgraded credit ratings — and most recently, the fluctuations caused by the outcome of the US presidential elections, have proven debilitating. The most glaring evidence is the depreciation of the Turkish lira, which has plunged 10% against the dollar in November alone.

Now that the umbrella of growth is blown inside out, the headwinds threaten to jounce the base as well. An economic tremor is Ankara's worst nightmare, especially now that a drive to install a presidential regime is afoot. Yet, the data shows the economy is on a contraction course, which, for the man in the street, will mean more unemployment, less prosperity and debt defaults. How the government will use public finances to prevent political blowbacks and whether its toolbox will be enough remains to be seen.