Who will pay $53 billion for Turkey’s safe zone project?

Turkey wants to build some 400,000 housing units in northeastern Syria where Operation Peace Spring is taking place in order to resettle some 2 million Syrian refugees. 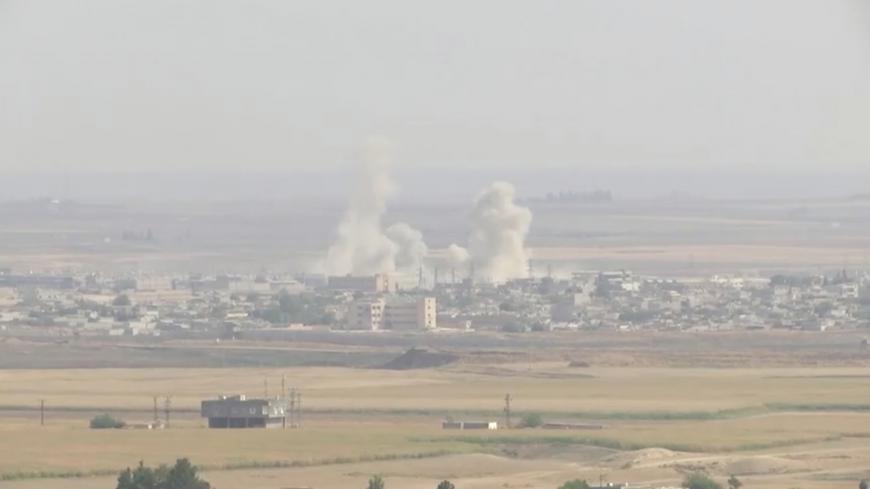 Smoke billows out after Turkish shelling on the Syrian border town of Ras al-Ain, as seen from Ceylanpinar, Turkey, Oct. 11, 2019, in this still image taken from a video. - REUTERS/ReutersTV

Turkey wants to build some 400,000 housing units in northeastern Syria where Operation Peace Spring is taking place in order to resettle some 2 million Syrian refugees, half of whom currently live in Turkey and the other half already lives there.

President Recep Tayyip Erdogan announced his self-styled resettlement project during his speech at the United Nations General Assembly (UNGA) gathering of world leaders on Sept. 25. He said Turkey was planning to resettle some 1 million refugees following the completion of the first phase of the military offensive against the Syrian Kurdish Protection Units (YPG) operating under the umbrella of the Syrian Democratic Forces.

The YPG, which Ankara believes is a threat to its national security, is an offshoot of the outlawed Kurdistan Workers Party, which Turkey, along with many Western powers, considers a terrorist organization.

Erdogan said that in the second phase of the operation a safe zone with a depth of 30 kilometer (18 miles) and a length of 480 kilometer (300 miles) will be completed with the capacity to host an additional million refugees.

“If we can manage to stretch the depth of the safe zone to Raqqa and Deir ez-Zor, we can increase the number of Syrians,” Erdogan said in regard to a third phase.

Turkey will need some $53 billion for the first two phases of the project, and it handed out a booklet at the UNGA meeting explaining the high cost of the resettlement project.

According to the booklet, a copy of which was obtained by Al-Monitor, the draft plan aims to establish 140 villages and 10 towns. The houses in the villages would be more than a thousand square feet with three bedrooms. Each village would consist of 100 houses and each house would have more than 10,000 square feet of farm land. These figures are based on families of five.

In these districts and villages, a total of 200,000 housing units would be constructed for the settlement of 1 million people. The construction cost for the first phase of the project is estimated at $26.4 billion.

It seems like a good plan, which many people who live under the poverty line in Turkey could be envious of, but there are questions that need to be answered. First and foremost, who will pay for this resettling project?

It is likely that Erdogan brought the issue up at the UNGA in order to gauge the interest of the international community for a possible relief fund, asking for a donors conference.

“As soon as the area is freed of the terrorists, we will get to work in the area with the help of the international community. We will begin this process with an international donors meeting,” Erdogan said.

However, the reactions from European Union (EU) member countries and many other international and regional capitals following the launch of Operation Peace Spring indicate that this is an unrealistic expectation.

“If the plan involves the creation of a so-called safe zone, don't expect the EU to pay for any of it," Jean-Claude Juncker, president of the European Commission, said immediately after the operation was launched.

The EU has already given Turkey billions of euros for the more than 3.6 million refugees in the country. There have been talks between Ankara and European capitals over a new aid package, yet the outcome of those talks are unclear, particularly after Turkey’s offensive.

What about Muslim countries? Turkey’s diplomatic relations with rich Arabic countries including Saudi Arabia and the United Arab Emirates are going through a rough period. Qatar and Kuwait on the other hand might lend a hand.

It is obvious that Turkey cannot shoulder this burden on its own as the country’s economy is not in good shape for such a substantial expense. The budget deficit keeps increasing and it reached some 89 billion liras ($15 billion) in the period January-September.

International aid is a must to get this project off the ground, but calls for financial assistance requires supervision by the UN; Turkey’s self-styled “refugee town” project, however, does not seem in line with any of the UN’s principles and international laws regarding refugee rights.

“A UN-approved environment should be created for refugees to resettle in an area and there are certain criteria for this. The return should be voluntary, the area must be secure and within the limits of human dignity,” refugee expert Metin Corabatir told Al-Monitor.

Corabatir, who is the president of the Research Center on Asylum and Migration and former spokesman in Turkey for the UN refugee agency, UNHCR, said that none of these three conditions are applicable in Syria right now and that financial support could only be obtained if these criteria are met.

Turkey appears to have very few doors to knock on in order to realize its resettlement project, but its main opposition party offers a different solution.

According to Faik Oztrak, spokesman of the Republican People's Party, “the shortest route” to a permanent solution for the refugees involves a dialogue with the regime of Syrian President Bashar al-Assad.

“Turkey has already spent more than $40 billion on the refugees,” he told Al-Monitor.