Security challenges loom for the new Turkish-administered safe zone in Syria as the deadline expires for the withdrawal of Kurdish forces. 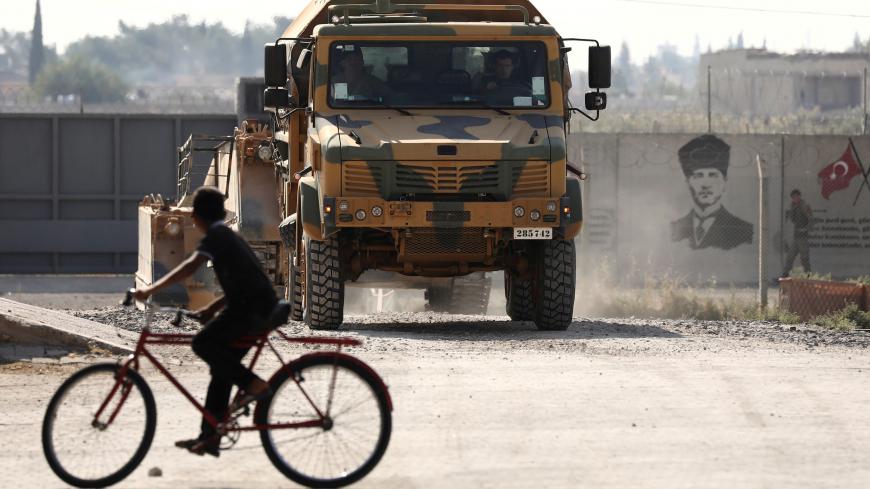 Turkish soldiers in a military vehicle return from the Syrian town of Tell Abyad, pictured on the Turkish-Syrian border in Akcakale, Turkey, Oct. 24, 2019. - REUTERS/Huseyin Aldemir

An air of volatility hangs over the newly created "safe zone" in northeast Syria following a two-week Turkish incursion to eradicate US-backed Kurdish forces from its southern border.

Hours before a cease-fire negotiated between Turkish and Russian officials — allowing for the withdrawal the People’s Protection Units (YPG) element of Kurdish-led forces that held the area since 2014 — was set to expire at 3 p.m. GMT today, Syrian regime forces clashed with the Turkish military, according to the Syrian Observatory for Human Rights.

Initial reports indicate at least six Syrian soldiers were injured and a dozen were taken captive in the exchange, the first such event since the Turkish incursion began on Oct. 9. The clash took place near the Syrian town of Ras al-Ain, highlighting the looming security challenges for Ankara as plans to maintain a Turkish troop presence in the area and eventually repatriate Syrian refugees currently living in Turkey remain in place.

US President Donald Trump greenlit the Turkish incursion, known as Operation Peace Spring, during an Oct. 6 phone call with President Recep Tayyip Erdogan in which he agreed to pull back American troops stationed in the region. Since then, YPG forces seen as security threat by Ankara have largely withdrawn from the border area, as required by back-to-back US and Russian cease-fire agreements, after initially resisting an offensive by Turkish troops and Turkish-backed Syrian forces.

Yet as the cease-fire expires, Ankara officials claim YPG forces remain in the "safe zone" 30 kilometers (18 miles) deep, and military operations could resume if all Kurdish forces fail to pull back.

“It looks like the YPG terror organization is still in the area of Operation Peace Spring,” Turkish Defense Minister Hulusi Akar told the Sabah newspaper in an interview. “This fight is not over. We are aware that it will not end.”

Russian and Turkish forces are expected to start joint patrols of a strip of land 10 kilometers (six miles) deep on the northeastern Syrian border following the cease-fire, though logistical details remain sparse at the time of reporting.

Along with the threat of renewed clashes between Turkish and Kurdish forces, Ankara must now manage increased scrutiny from the international community regarding its latest Syria incursion while also establishing the stability required to fulfill its plan to repatriate some of the 3.6 million Syrians refugees currently in Turkey to the area.

“Unless the operation fits into a long-term strategy of managing the territory and relations with Russia and the Assad regime as well as domestic fallout, the military success won’t be sustainable and will beg the question of whether or not it translates into long-term success,” Ziya Meral, a senior resident fellow at the British Army's Centre for Historical Analysis and Conflict Research, told Al-Monitor.

Prior to Operation Peace Spring, Erdogan sought support for the safe zone at the United Nations General Assembly summit in September by claiming up to 2 million Syrian refugees could be voluntarily repatriated to the region if a Turkish security apparatus could be established along the entirety of the Syrian border.

Yet the safe zone, as it stands today, running between the Syrian border towns of Ras al-Ain and Tell Abyad, is smaller than the originally proposal and may not offer the capacity for as many refugees as initially envisioned, according to Metin Corabatir, president of the Ankara-based Research Center on Asylum and Migration.

In addition, Corabatir said just 300,000-400,000 of the Syrian refugees currently in Turkey are originally from northeastern Syria. Most refugees in Turkey are from Aleppo and Idlib.

“At the moment, it’s not safe enough and not large enough to absorb so many refugees, and it needs be a voluntary repatriation as many refugees are not originally from that area,” Corabatir told Al-Monitor.

Earlier this year, Turkish officials faced international condemnation over reports that some Syrian refugees had been forcefully returned to Syria’s Idlib province. Last week, Amnesty International and Human Rights Watch released in-depth investigations into the allegations that some Syrians were pressured to sign voluntary repatriation forms while in Turkish detention centers.

The Turkish government remains under domestic pressure to address growing discontent with the prolonged presence of Syrian refugees, who some Turkish citizens believe have unfair advantages in the labor market and pose a financial burden on limited state resources.

Such sentiments are believed to have materialized as March's electoral victories for opposition parties who ran campaigns critical of Erdogan’s loose refugee policies. Corabatir said tensions remain following Operation Peace Spring and that Turkish leaders would likely seek to facilitate a voluntary return program to the safe zone when security threats subside.

“This is the political stance to reduce these tensions,” Corabatir told Al-Monitor. “Unfortunately, the public has been deceived by misleading or fabricated stories against the refugees.”

He added, “There are still negative feelings and hatred between some segments of the Turkish community and Syrians and some groups continue to make black propaganda.”

Acting on the dual pressure created by anti-refugee sentiment and the long-held military objective of eliminating YPG security threats on Turkey’s southern border, Ankara will have to move cautiously while cementing its presence in the safe zone.

“In many ways, Ankara had no option but to intervene in northeast Syria,” Meral told Al-Monitor. Ankara found itself facing “unsustainable tension trying to handle both American and Russian pressure while holding onto its own national interests.”

He added, “It is that diplomatic stress that will ultimately define whether or not military achievement will be a net success for Turkey.”