Vice President Mike Pence announced that Turkish officials have agreed to suspend military operations in northeast Syria for five days to allow Kurdish forces to withdraw from the border area. 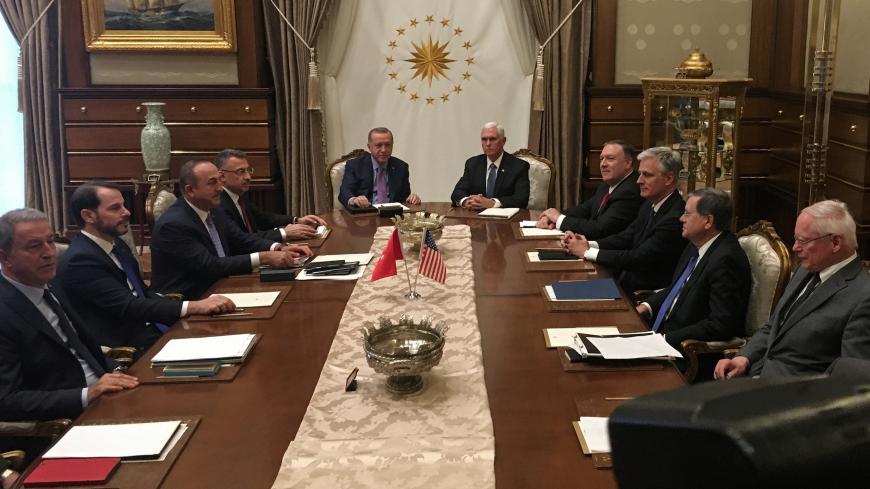 ANKARA, Turkey — In a surprise announcement, US Vice President Mike Pence said officials in Ankara agreed to a five-day cease-fire in northeast Syria to allow Kurdish militants to evacuate a 20-mile area that will become a "safe zone" along Turkey’s border.

At a separate press conference, Turkish Foreign Minister Mevlut Cavusolgu said, "We are suspending the operation, not halting it … We can halt the operation only after [Kurdish militants] withdraw from the region completely."

He added, "This is not a cease-fire. A cease-fire is done between two legitimate parties.”

The statements follow the introduction of symbolic sanctions from Donald Trump Oct. 14 and a bipartisan effort in the US Congress to leverage more severe sanctions on Turkey to bring about a cease-fire.

“US economic sanctions would destroy Turkey’s economy now, and Erdogan knows this, so he doesn’t want a rupture with the US,” Soner Cagaptay, the director of the Turkish Research Program at the Washington Institute for Near East Policy, told Al-Monitor. “[Erdogan] might greenlight Pence for a cease-fire, but I also would not be surprised if Erdogan does not finalize the details of the cease-fire until he sees [Vladimir] Putin on Oct. 22 in Sochi.”

Pence’s visit comes as Trump sends mixed messages regarding Turkey’s military operation, which he has both supported and threatened to impose more sanctions over, causing confusion in diplomatic circles.

A leaked letter dated Oct. 9, in which Trump asks Erdogan not to be a “tough guy” or a “fool” just before the operation launched, has caused further disarray. The disclosure was not only embarrassing for the US leader, but also revealed the disrespectful language he used in negotiations with Erdogan, weakening Pence’s stand ahead of his meeting in Ankara, according to Asli Aydintasbas, a senior fellow at the European Council on Foreign Relations.

“I think Pence would’ve had a stronger hand had the letter not been leaked,” Aydintasbas told Al-Monitor. “So the official announcement will be, Turkey will continue until it reaches its aims, but underneath it all, there was a possibility in working out an arrangement in which this incursion would wrap up.”

Trump agreed during an Oct. 6 call with Erdogan to pull back about 1,000 US troops stationed in northeast Syria, giving the greenlight for a Turkish offensive.

Since the launch of the incursion — known as Operation Peace Spring — Turkish forces and Turkish-backed Syrian opposition ground troops have fought in key border towns. To date, more than 300,000 civilians have been displaced in northeast Syria as a result of the offensive, according to the Syrian Observatory for Human Rights.

Amid growing backlash from the international community and within various branches of government in Washington, Trump has defended his decision to greenlight the operation, dismissing the fighting as irrelevant to US interests. Mazlum Kobani, a commander with the US-allied Syrian Democratic Forces (SDF), said Trump did not oppose a deal struck between the group, Syrian regime forces and Russian forces, which have moved into the vacuum left by US troops and took control of the key border town of Kobani.

“Syria may have some help with Russia, and that’s fine,” Trump told reporters on Wednesday. “They’ve got a lot of sand over there. So, there’s a lot of sand that they can play with.”

He added, “Let them fight their own wars."

Trump’s comments were made in response to a House of Representative resolution in which two-thirds of Republican members took a rare step in joining Democrats to condemn the Turkish operation, passing the measure with a 354-60 vote. The resolution was a stinging rebuke to the president’s decision to withdraw US forces from the region and resulted in a direct confrontation between House Speaker Nancy Pelosi and Trump.

On Oct. 17, Sen. Lindsey Graham, R-S.C., introduced a separate set of congressional sanctions to bring about a cease-fire under the Countering Turkish Aggression Act of 2019. If passed, the package would target Turkish financial institutions, the energy sector and government officials while reducing US military assistance.

Graham’s draft legislation would also apply sanctions through the Countering America's Adversaries Through Sanctions Act (CAATSA) within 30 days. To date, CAATSA sanctions had been deferred following Ankara’s acquisition of the Russian-made S-400 missile defense system earlier this year, which violated the act.

Speaking in Ankara, Pence said the White House would not introduce new sanctions on Turkey during the five-day cease-fire.

Pence said the agreement “ends the violence, which is what President Trump sent us here to do.”

Still, the threat of sanctions following the five-day period — as well as looming sanctions targeting Halkbank, a Turkish state-owned bank — is not expected to sway Turkish leaders to end the Syrian incursion.

“Neither sanction threats nor condemnations can deter us from our rightful cause," Turkish presidential spokesman Ibrahim Kalin told reporters in Ankara Oct. 16.

Ahead of Pence and Pompeo's visit, special envoy to Syria James Jeffrey and national security adviser Robert O'Brien had a closed-door meeting in Ankara with Cavusoglu.

Regardless of how developments in northeast Syria proceed, some Washington observers said the imposition of sanctions on Turkey may be gaining traction as Trump’s personal relations come under scrutiny with the advancement of impeachment proceedings.

“Turkey is becoming, in my view, the object of the anti-Trump rebellion in the United States,” Cagaptay told Al-Monitor. “It’s very easy for Turkey to get sucked into domestic political debates, and regardless of how people think the US-Turkey relationship should be going, there’s a risk that through the close relationship between Erdogan and Trump, Turkey might be targeted.”

Aydintasbas echoed such sentiments, saying that while Trump was initially trying to improve US-Turkish relations, increased pressure from DC legislators may push him to take a harsher stance against the Syria operation.

“The new ball game is about Washington politics, it’s all about impeachment," Aydintasbas told Al-Monitor. “And Trump has shown he is willing to throw both Erdogan and the Syrian Kurds under the bus in order to save his presidency.”