The Turkish president's proposal to build refugee settlements in the safe zone has already revitalized the Turkish construction industry. Neither refugees nor the Kurds are pleased, and the international community has lashed out at the plan. 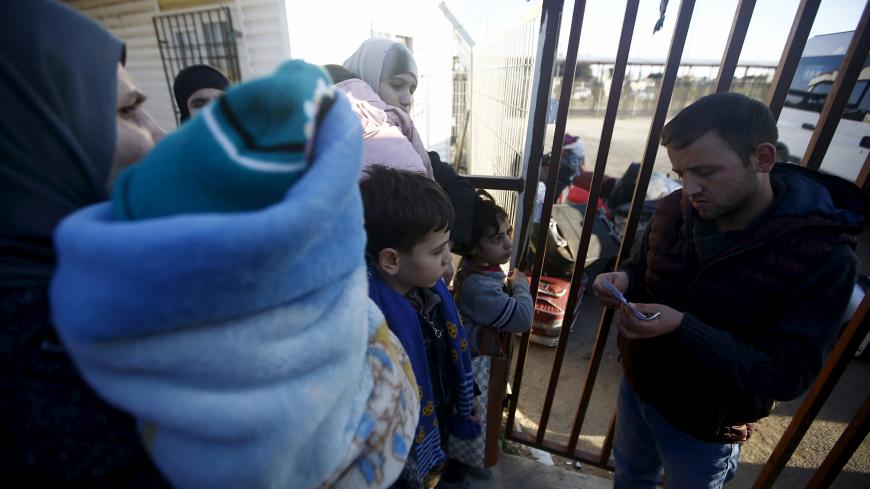 Syrians line up as they wait to cross into Syria at Oncupinar border crossing in the southeastern city of Kilis, Turkey, Feb. 8, 2016. - REUTERS/Osman Orsal

On Sept. 24, Turkish President Recep Tayyip Erdogan introduced what was referred to as an unprecedented project envisaging the establishment of refugee towns in Syrian areas where Turkey’s Operation Peace Spring is taking place.

A week later, he revealed the details of this curious project. “We made the necessary plans. With the support from international community we will resettle 1 million people into 140 villages with 5,000 inhabitants and 50 districts of 30,000 inhabitants,” he said during his parliamentary address Oct. 1. “Preliminary work on building new villages and districts has started, locations are established and costs calculated.”

Erdogan also said that some 370,000 refugees have returned to the northwestern Syrian cities of Afrin and Jarablus. However, there is an important distinction here: Those refugees returned to their hometowns, where they have strong connections and family. Erdogan’s plans, on the other hand, involve establishing new settlements for vast numbers of refugees who fled their hometowns in Aleppo, Idlib and other parts of Syria.

Furthermore, unlike the northwestern region of Syria, where the battles are almost over, the fight in the northeastern areas has just begun with Turkey’s military operation against the Kurdish groups that Ankara considers a threat to Turkish national security.

“Even if Turkey manages to control the region, there will be spillovers, perhaps suicide attacks and it won’t be a comfortable zone,” refugee expert Metin Corabatir told Al-Monitor. “Of course, most people will not go there voluntarily.”

What if the Turkish government attempts to deport refugees forcefully, as it did in late July after the local elections? Syrian refugees played a prominent role in municipal elections in which the ruling Justice and Development Party (AKP) suffered huge losses.

Corabatir, who is the president of the Research Center on Asylum and Migration and is a former spokesman in Turkey for the UN refugee agency UNHCR, said forced deportations are against international laws and Turkey’s open-border policy.

“Hundreds of thousands of refugees from the region might choose to go back, but it won’t be millions,” he said. “Turkey might establish a safe zone for its own safety but this is not a place for civilians and refugees.”

Another point of concern is possible attempts at “demographic engineering” by Turkey.

These concerns were voiced by lawmakers from Turkey’s pro-Kurdish Peoples’ Democratic Party (HDP) during the Oct. 10 vote for a motion to extend government's authority to launch cross-border military operations in Iraq and Syria for one more year.

“Five million people are already living in that region. … Disregarding this fact in order to facilitate demographic change can have serious consequences,” HDP lawmaker Saruhan Oluc said during the parliamentary discussion.

“People from Tell Abyad should go back to Tell Abyad, those from Serekaniya to Serekaniya. If you are saying that you will bring people from Hama, Humus, Deyrizor, Raqqa and everywhere else to this region to settle, you are committing a crime,” said Hisyar Ozsoy, another HDP lawmaker.

In response to criticism, Ismet Yilmaz, an AKP lawmaker and Turkey’s former minister of defense, said the safe zone will be a “safe haven” for refugees.

While neither the Kurds nor Syrian refugees seem to be fond of Erdogan’s new settlement plan, it made a positive impact on Turkey’s construction market.

Mehmet Filoglu, a veteran finance journalist, said shares of cement companies to the south and southeast of Turkey saw their values increase around 30% or more after Erdogan’s announcement.

“For example, the market value of the shares of Mardin Cimento increased by 41% in two days (Oct. 7-8). You can say that the plan aims to revitalize the construction industry,” he told Al-Monitor.

What is the cost of Turkey’s self-styled refugee towns project and who will pay? The billions of dollars the European Union (EU) has been granting Turkey for refugees is to end next year.

Erdogan has asked EU to instead increase its support, and has threatened to open the doors to Europe for Syrians if the request is declined. “We will open the gates and send 3.6 million refugees your way,” Erdogan said Oct. 10 while lashing out at EU criticism of Operation Peace Spring.

Corabatir also agrees that Europe has to increase its support to Turkey, yet his grounds are completely different than Erdogan’s.

He said that “3.6 million Syrians should be able to keep living in Turkey until peace is restored in Syria. … Turkey should ask more support from Europe to ensure this.”