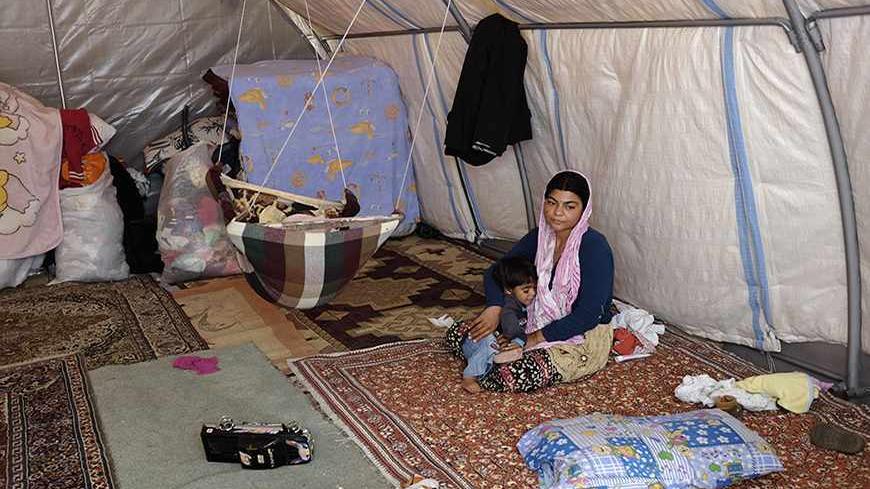 A Syrian Alawite refugee woman sits with her children in a tent at the courtyard of Pirsultan Abdal Cemevi in Istanbul, Oct. 11, 2013. - REUTERS/Murad Sezer

Turkish politics is experiencing a change as Ashoura — the 10th day of Muharram, the first month of the Islamic lunar calendar — approaches (Nov. 14). On Nov. 10, Turkish Foreign Minister Ahmet Davutoglu dressed in black to reflect the mourning period of Ashoura when visiting Najaf and Karbala — considered holy cities in Shiite Islam — and Baghdad. He also paid a visit to the shrine of Imam Hussein, the Prophet Muhammad's grandson. Davutoglu said, “Those who claim we are pro-Sunni should see me here now.”

On Nov. 11, Turkish Prime Minister Recep Tayyip Erdogan attended a Muharram iftar (breaking of the fast for Alevis) — a ritual of public display that many prominent Alevis oppose. Erdogan's words — “My unborn grandson will be named Ali,” referring to Imam Ali, the prophet’s cousin and son-in-law — created uproar in social media. Erdogan’s advisers have been tweeting about Karbala, Imam Ali and Imam Hussein and mourning on the occasion of Ashoura over the last couple of days as well. We see a deep struggle within the Justice and Development Party (AKP) to mend bridges with “neighbors” and “Muslims other than Sunnis” and reset its Middle East policies.

As pundits start deliberating on the AKP’s U-turn in foreign and domestic politics, I have been particularly worried about a specific group of Syrian “guests” in Turkey: Syrian Alawites. Turkey signed the UN Refugee Convention of 1951, but reserves the right not to apply refugee status to “non-European” entities. The AKP has been referring to all Syrians as “our guests” and takes pride in providing good living conditions for Syrians refugees. The AKP often emphasizes how they have camps designed for each religious group. It is estimated that there are more than 600,000 Syrian refugees in Turkey.

Syrian Alawites, referred to by AKP officials as Nusayris — a derogatory term not accepted by most Alevis in Turkey or Alawites in Syria — indeed can briefly be explained as follows. Some are Turkmen. They speak Turkish and have a good networking system with Alevi centers in Turkey. The second group, which is also known as "Assad’s sect," are the Arab Alawites. There are also Kurdish Alevis in Turkey. Throughout history, Alawites have faced persecution and have been referred to as kafirrun (unbeliever or heretic). This forced them to be inward-looking, close-knit groups, which prefer to preserve their traditions and beliefs in secrecy. Hence, their rituals differ. Yet, what unites them now may be stronger than before: the threat of radical Sunni Islamist militia — al-Qaeda offshoots, known mostly as Jabhat al-Nusra — which promises heaven to those who “spill Alawite blood.” Many Alawites have been uprooted from their homes in Syria. Syrian Alawites — unlike Kurds or Maronites — lack a Western-based diaspora to make their voices heard or reunite through family networks in times of political crisis.

Hatice Altinisik — a brave and prominent Alevi activist and People's Democratic Party (HDP) deputy chairwoman responsible for "people and their beliefs" — told Al-Monitor, “The world, particularly the United Nations, needs to pay special attention to the suffering of Alawites.” Altinisik reconfirmed what tens of other activists and observers have reported on Alawites' fear regarding rumors that al-Qaeda and other radical Islamists will “cut their throats,” rape women and children and force them back into war. All contacts in the field confirmed that Syrian Alawites opt away from the state-sponsored refugee camps in Turkey. Altinisik explained, “They would rather live in tents in cities such as Istanbul, Elazig, Gaziantep, Kilis, Izmir and Bingol than live in a refugee camp." She added, “We learned most Alawites’ first choice was Lebanon. When roads to Lebanon were blocked by Jabhat al-Nusra, they had no option but to come to Turkey.” Syrian Alawites have expressed their appreciation for the Turkish government’s open door policy.

In the Turkish media, reporting on Syrian Alawites in Turkey is far and few between. Syrian Alawites are shy to appear in front of the cameras and ask reporters not to show their faces, even though what they share is rather innocent. Namely, they want to go back home, and they want to have an opportunity to work, afford a house and schooling for their children. Most of all, they seek a temporary ID card that will allow them to legally work in Turkey, which they believe was made available to Syrian Sunnis. What differentiates them from other groups is that they harbor a deep fear of retaliation because of their religious identity. Ali Kenanoglu, chairman of the Hubyar Alevi Cultural Association, told Al-Monitor, "Syrian Alawites in Turkey are scared for two reasons. One is the often-repeated fear of the rumor that Turkey cooperates with Jabhat al-Nusra and the other is Turkey’s Syria policy that could put them in the midst of the confrontation between the regime and opposition forces. Hence, they only trust the Turkish Alevis for support.” Kenanoglu explained how several Turkish Alevi associations organize efforts to assist refugees, host many of them at cemevis (Alevi houses of worship that still lack proper legal status in Turkey) and provide food and shelter. Kenanoglu estimates their numbers between 8,000 and 10,000 in the border towns, and between 3,000 and 5,000 in major cities.

Another Alevi activist and pundit from Hatay, Bereket Kar, told Al-Monitor that Alawites are concerned not about attacks by other Syrians, but “foreign fighters,” an assorted group of Islamists who are supported by the Gulf countries. Rumors of kidnappings, torture and rape in the name of jihad affect the Syrian Alawites the most. Kar explained bias and negative perceptions in the Turkish public against Syrian Alawites, because they were presented as “members of the ruling class. However, in reality they are rather poor and unarmed.” Kar added, “Alawites, along with other ethnic and religious minorities such as Arab Christians, Armenians, Druze, Ismailis and also a majority of Sunni Syrian Arabs do not wish to see an Islamic rule in Syria’s future. Their first priority is for the foreign fighters to leave Syria and countries to stop funding and arming these groups.”

Kar also emphasized what all other Turkish Alevi activists confirm: Syrian Alawite refugees face an added layer of difficulty in Turkey, particularly because they are Alawites. Common observations include issues such as different districts asking them to evacuate parks and mosques turning down their pleas for shelter. A frequent complaint by the refugees is that mosques charge them to use the bathroom. Kar added, “Even Turkish Alevi doctors, teachers, translators and other civil servants assigned to attend the Syrian refugee camps have faced strong opposition from the camp’s Sunni residents.” Many believe the Turkish government is quiet about discrimination, if not an active part of it.

Being a refugee in another country — even under the best of circumstances — is a humbling and humiliating experience. Through my research, I have observed a strong struggle by Syrian Alawites to guard their dignity and security. Several valid reasons exist why refugees would feel insecure in their host country; Syrian Alawites have more reasons to be scared in Turkey. Many question as the Syrian civil war intensifies whether the Turkish government will ease back on its anti-Assad rhetoric and decrease its active support for the Sunni-dominated opposition. AKP attempts to launch a charm offensive regionally with Iraq and Iran and domestically with the Turkish Alevis on the occasion of Ashoura are hopeful signals that may help calm Syrian Alawites' nerves.