Syrians to be deported for eating bananas 'provocatively' in Turkey

As tensions soar between Turks and their country's 4 million refugees, a viral trend of young Syrians posting videos of themselves eating bananas has ended in some set to be deported. 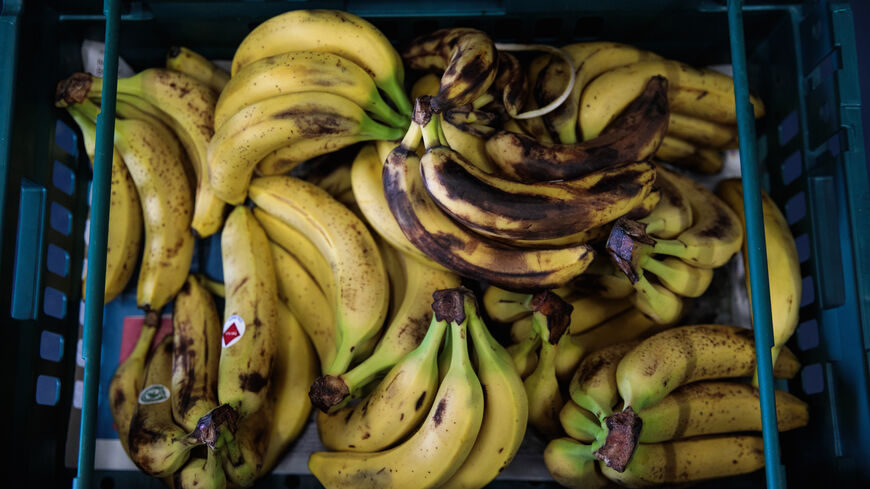 Bunches of bananas, which were to be disposed of by a supermarket, sit in a crate at food-waste charity The Felix Project's warehouse in Park Royal on Feb. 27, 2019 in London, England. - Jack Taylor/Getty Images

Turkey said that it was deporting at least seven Syrians for participating in a “provocative banana-eating campaign” after a wave of TikTok videos showing young Syrians munching the fruit as a way of mocking anti-refugee sentiment in Turkey and the battered Turkish economy.

The images and videos — posted by Syrians not only in Turkey but also in other countries — came after a Turkish man complained before cameras that he could no longer afford bananas, whereas the Syrians could buy loads. Bananas, which cost $1-2 per kilogram in Turkey, are traditionally seen as a symbol of a lavish lifestyle.

While some Turks reacted to the Syrian videos that have gone viral over the last 10 days, the deportation announcement from Turkey’s Directorate General of Migration Management came as a surprise — and brought questions about whether the deportations, which have not yet taken place, would be legal.

“I honestly did not see that coming,” Omar Kadkoy, a policy analyst at the Economic Policy Research Foundation of Turkey, told Al-Monitor. “The deportation announcement shows a bankruptcy of policy. Do the Syrians have no right to express their views when they are faced with discrimination or use sarcasm against the anti-refugee myths? What does it say for freedom of expression? Worse, what does it say about social cohesion between the Turkish and Syrian communities, except to say it is on very thin ice?”

A cryptic statement by the directorate said that a probe over the provocative social media posts had led to the arrest of seven foreign nationals who were being deported following the judicial process. The migration authority’s statement did not clarify just what the seven people were charged with, but a statement from the Istanbul police later on Thursday said that 11 Syrians had been taken into custody for “inciting hatred” and “insulting Turkish people.”

Metin Corabatir, the president of the Ankara-based Research Center on Asylum and Migration and a former speaker for the UN High Commissioner for Refugees, said that the deportations were a violation of Article 32 on the expulsion of refugees of the 1951 Convention on Refugees and Turkey’s own law.

Pointing out that the Syrians could not be deported to their countries if their lives were at risk, Corabatir said, “The statement does not explain where these people would be deported to. … If they face a threat to their lives or face torture and ill treatment, the responsibility rests with not only with those who deported them but those who turned innocent social media posts into a new anti-migration campaign.”

The Kafkaesque process over banana-eating videos started with a street interview in Istanbul’s working-class Esenler district on Oct. 17, when a group of Turks vented their anger before cameras at both the Syrians under temporary protection in Turkey and the government’s migration policy. Accusing the Syrians in Turkey of living off state subsidies, a woman shouted, “Go back to your country and fight your own war.” But the most widely circulated quote was that of a middle-aged man who shouted at a young Syrian woman, “I can’t eat bananas while you buy them by the kilo.”

The remarks are emblematic of the myths about Syrian refugees such as free entry to universities, free medical services, five-digit monthly salaries or even 50% reduction cards at IKEA shops. It also reflects the harshening tone toward refugees in Turkey, which hosts the world’s largest refugee population that includes 4 million Syrians. The high cost of living, rising unemployment and the overall discontent with the economy have fanned anger toward the refugees and loud calls for their return.

Following the angry video, several young Syrians posted their own. Most of them simply show young people, alone or in groups, relishing bananas or holding armloads of them. One showed a Syrian mimicking a Turkish family and dividing a single banana among several people as they ate on the floor, saying, “We are not Syrians but Turks, so we are forced to share a single banana.” Another user photoshopped a 100-dollar bill with a bunch of bananas, alluding to the Turkish lira constantly losing value against the dollar.

Others spurred a fiercer reaction. In one video posted by Twitter user @ahmed-almadoor, a monkey with a Turkish flag superimposed on it steals a banana from a man. A post by the same user that showed the crescent in the Turkish flag replaced by a banana carried the online campaign to the mainstream media.

“We can no longer tolerate these attacks that go as far as insulting our flag,” wrote Fatih Altayli, a widely read columnist for Haberturk, asking the government to end its silence. “Isn’t it time to say stop?”

As the reactions intensified, one Syrian posted an apology. The young man identified as Ahmet Hadou said that the videos did not represent the 4 million Syrians in Turkey. “We do not endorse them — they might even be provocations by some groups. But it is also a pity that some people are waiting for an opportunity to lump everything together and blame all Syrians,” he said.

Umit Ozdag’s anti-refugee Victory Party has called on the Interior Ministry to take legal action and deport those who “insulted Turks.” The party’s deputy chair Ugur Turhan filed a complaint to the Istanbul prosecutor’s office on Tuesday, claiming that the videos violated Art. 300 of the Turkish penal code — on degrading national symbols including the flag — and said it was punishable, under Turkish law, by three years of imprisonment.

“While I do see the pride Turkish people have over their national symbols, why does it have to lead to deportation?” Kadkoy commented to Al-Monitor.