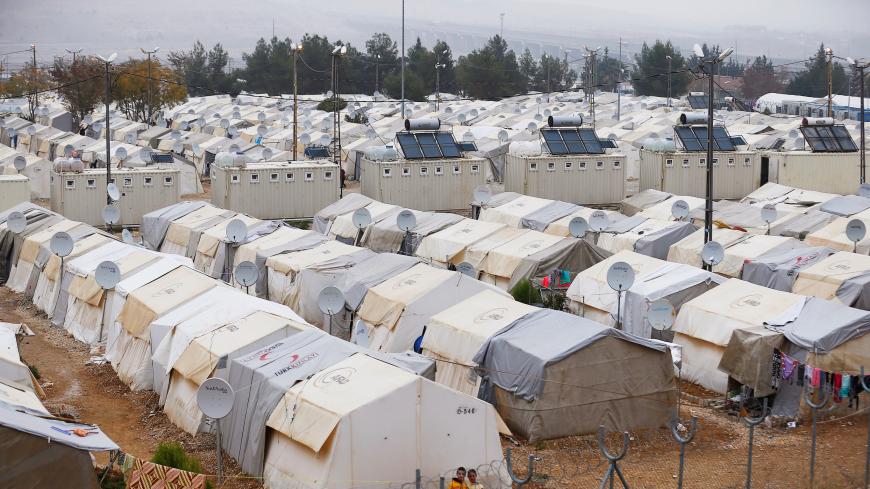 Boisterous celebrations by Syrians on New Year’s Eve in Istanbul’s Taksim Square, where the Syrian flag and Free Syrian Army (FSA) banners were waved amidst anti-Assad chants, has reignited the heated debate in Turkey over Syrian refugees.

Many are claiming Syrian youngsters are enjoying a good time in Turkey instead of traveling to Syria — “where Turkish soldiers are fighting and dying” — to liberate their country from a tyrant.

Fact and fiction are entwined in this debate, which is laced with accusations of racism and intolerance. Many Turks are angry, for example, over the privileges the government has been extending to Syrians while ordinary Turks struggle to eke out a living. Many also argue that Syrians are undercutting the labor market and depriving Turks of their livelihood. Also fueling the debate is “Syrian ghettoization” in Istanbul and other cities, where certain districts have been overrun with Arabic shop signs.

President Recep Tayyip Erdogan continues to boast about the 3.6 million Syrians Turkey has given shelter to. He also complains that Turkey has been footing the bill while European countries squabble over quotas on how many refugees they will accept. Ankara says it has spent over $30 billion from its own coffers on the refugees so far.

There is some justification to what Ankara says. Turkey has also been commended by UN Secretary General Antonio Guterres for the burden it has assumed in this respect.

Despite such praise, though, disgruntlement over the presence of the Syrians is becoming more vocal in the Turkish media. The concerns of ordinary Turks include demographic, economic, social, cultural and security issues stemming from such a large injection of foreigners into Turkey.

There are also strong opponents of the Erdogan government who accuse those complaining about the presence of the Syrians of intolerance and racism, demonstrating just how complex the issue has become for Turkey.

According to Turkey’s Directorate General of Migration Management, Syrians in Turkey surpassed 3.6 million in 2018. Even thought 291,000 refugees returned to Syria after Turkey’s Euphrates Shield and Olive Branch operations in 2017 and 2018, respectively, the total number of Syrian refugees increased in 2018 by 187,000.

Sevilay Yilman, a Haberturk columnist who is known for her incendiary articles, kicked of the debate after she deplored the spectacle of the Syrians in Taksim Square on New Year’s Eve.

“Taksim is no longer the Taksim we knew from previous New Year’s celebrations,” Yilman, who has stood by Erdogan’s government in the past, bemoaned. “The Syrians that filled Taksim Square were not celebrating but demonstrating.”

Yilman argued, “Everyone wishes the Syrians to be free. But Syrians who want to see that happen even more than us should not be waving those flags in Taksim, but in Syria. … Rather than shouting and yelling in Taksim they should join our soldiers in Syria who are keeping watch there night and day.”

Yasin Aktay, an adviser to Erdogan, refuted the claim that Turkish soldiers were fighting for Syria. “Turkey is in Syria primarily to protect its borders and its people from the threat of terrorism and invasion,” Aktay wrote in the pro-government Yeni Safak. He was referring mainly to Turkey’s fight against the Kurdish People's Protection Units, which Ankara says is a terrorist group that threatens Turkey’s security.

“The greatest support in this task comes from heroic young Syrians who are fighting shoulder to shoulder with Turkish soldiers,” Aktay added.

However, Aktay’s fellow Yeni Safak columnist Hasan Ozturk supported Yilman, arguing that the lifestyles Syrians are forcing on Turkey would pose serious problems in the future.

“We don’t say the Syrians should forget their traditions, but they have the responsibility of complying with the rules of the countries they have taken refuge in,” Ozturk wrote. “To argue that we successfully incorporated a large population in our midst is nothing but negligence, and amount to sweeping the problem under the carpet.”

Meanwhile, many situations have arisen that serve as reminders of the social problems the presence of the Syrians is causing around the country.

In September, violence erupted against Syrian refugees in the eastern province of Sirnak after a fight between Turkish and Syrian children escalated into a pitch battle between the families and resulted in the Syrian side shooting and killing two Turkish brothers. Syrian shops and houses were attacked and damaged by infuriated locals, resulting in 45 arrests and the expulsion from Turkey of 639 Syrians. In October, 250 Syrians in the western province of Denizli were relocated following demonstrations by locals after a number of Syrians allegedly harassed a 14-year-old girl.

These are by no means unique cases. Many independent observers believe incidents such as these are generally underreported by the pro-government media.

Political talk show presenter Fatih Altayli has indirectly suggested that the government’s avid support for the Syrians owes to their Muslim identity. Writing for Haberturk, Altayli referred to the government’s argument that the Syrians were from lands that were once part of Turkey — meaning the Ottoman Empire — a century ago. Interior Minister Suleyman Soylu has contended that Syrians should be welcomed as kin by Turks because of this history.

To highlight his point, Altayli speculated about unlikely scenarios in Greece or Armenia that could force millions to seek shelter in Turkey and questioned whether the welcome extended to Syrians would have been shown them.

Nationalist commentator Mehmet Farac also wrote a provocative article in which he asked rhetorically whether it is Syria or Turkey that is under occupation. Farac claimed that the tax exemptions, social benefits and free medical care extended to the Syrians by the government are angering Turks and preparing the ground for serious social conflict. He wrote, “Whose shame is it that our citizens in need of medical care have to get Syrians to apply for them in order to obtain it?”

The government maintains that that scope of the assistance provided Syrian refugees is being grossly exaggerated by the opposition, but undermines its own case by stating that it has spent $30 billion to date on the refugees.

Meanwhile, some pro-government commentators are invoking what they refer to as “European tolerance for outsiders” to counter anti-Syrian sentiments in Turkey. Resul Tosun from Star newspaper, which acts as a mouthpiece for the government, is one of them.

“I was surprised when I saw the Turkish district in Berlin or saw the Turkish and Arabic shop in Preston, New York. It saddens me to see our excessive reactions to our co-religionists the Syrians when Germans and Americans show foreigners such tolerance,” Tosun wrote.

What is really surprising is that columnists like Tosun, who represent a point of view that usually vilifies the West over its intolerance for Muslims, are all of a sudden lauding the West for its tolerance for outsiders.

Seasoned political analyst Fehmi Koru laid out Turkey's situation in stark terms. “You understand the situation better when you talk to these people. Although they miss their country, they make it evident that they will continue to live among us,” Koru wrote in his widely read daily blog. “Whether we like it or not, our country will have a significant Arab population after a while,” he argued.

Koru went on to stress the need to take advantage of the benefits that Syrian professionals could provide Turkey, rather than forcing them to seek their future in the West because of the disregard they face in this country.

At this stage, it is clear that the debate over Syrian refugees will only get more heated in Turkey, as long as the government provides no clear indication of its plans for the future of these people.