Turkey's polarized public appears to have found a common cause against a proposed offer of citizenship and preferential treatment for Syrian refugees. 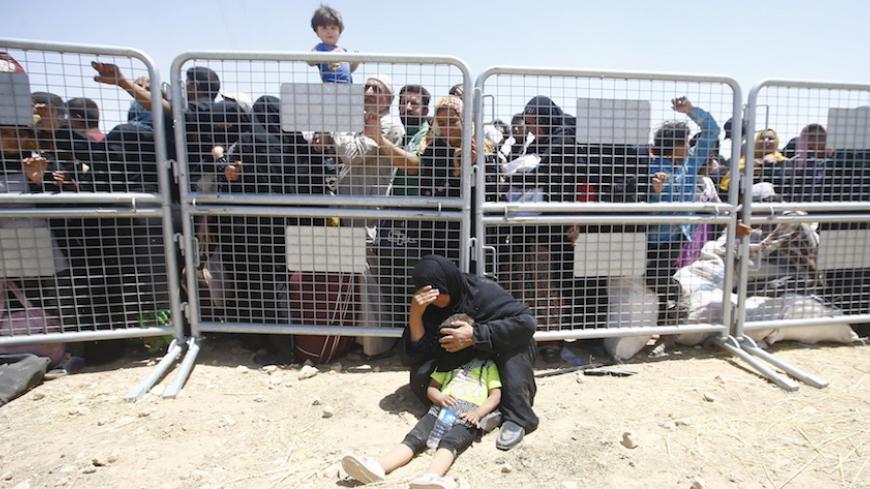 Syrian refugees wait for transportation after crossing into Turkey from the Syrian town of Tal Abyad, near Akcakale in Sanliurfa province, Turkey, June 10, 2015. - REUTERS/Osman Orsal

Thanks to President Recep Tayyip Erdogan, the plight of the 3 million Syrian refugees in Turkey has once again become the subject of an acrimonious debate. Erdogan announced on July 2 that the government was working on offering citizenship to Syrians. He did so while addressing a crowd of Syrians in the southeastern town of Kilis, near the Syrian border, which has borne the brunt of the Syrian conflict more than any other place in the country. “I want to give you good news tonight,” Erdogan said. “There are those among our brothers and sisters who I believe want to become citizens. Our Interior Ministry is taking steps for this.”

Returning July 11 from a NATO summit in Warsaw, Erdogan tried to clarify the matter by telling reporters on his plane that what was actually being proposed was dual citizenship for the Syrians, who could later decide which country they preferred to live in. That aside, he ended up further fueling the public debate by saying that the Syrians could be lodged in housing built by Turkey’s Mass Housing Authority (TOKI), which provides low-cost housing for lower-income groups.

The uproar was immediate, accompanied by hostile and racist verbal attacks against Syrians and claims that the ruling Justice and Development Party (AKP) was more sympathetic toward Syrians than needy Turks. Erdogan was also accused of trying to shore up the AKP’s political support base by using the Syrians.

There were violent incidents between locals and Syrians in various parts of the country following reporting on Erdogan's remarks on the citizenship issue. In Beysehir, a town attached to the central Anatolian city of Konya, a fight broke out the night of July 10 between Turkish and Syrian youths over a stray dog kicked by a Syrian. Security forces intervened, but could not prevent a Syrian and a Turkish youth from dying from stab wounds.

A day later, tensions emerged between locals and Syrians in the predominantly Kurdish southeastern city of Sanliurfa after a local youth was attacked, stabbed and had his phone stolen. Local youths who blamed a Syrian for the attack gathered in the city center and chanted “Out with the Syrians” and similar slogans.

Such incidents have not exactly been rare in Turkey since the beginning of the Syrian crisis, but because the latest tensions flared after Erdogan’s remarks, the general inclination has been to make a connection to them. Sozcu, a stridently secular daily, wasted no time poking the hornet’s nest. Under a giant headline, its July 9 edition listed the benefits accruing to the Syrians — before being offered to millions of needy Turks — once they become citizens.

Cemil Ipekci, one of Turkey's best-known fashion designers, pitched in, causing an uproar with a blatantly anti-Syrian remark following Erdogan’s announcement. Ipekci tweeted, “There are those who are trying — in the name of injecting fresh blood — to put 3 million more people among us who sold their country and fled.” His words were derided, but many shared the sentiment.

Ahmet Hakan, a popular columnist for the mass circulation daily Hurriyet, argued that opposition to Syrians being give citizenship cut across party lines, and summed up the situation, stating, “Our people, who for years have been unable to agree on anything, who have been divided, and who some believe have lost their character as a nation because of this, have become a nation again due to the Syrian question.”

The head of TOKI was eventually forced to announce that the authority had not received any instruction from the government in regard to the Syrians, adding that even if it did, Turkey’s new citizens of Syrian origin would have to pay for their homes, just like everyone else. His statement mollified few, leaving many still questioning why Syrians should receive preferential treatment, even if they paid for it, while tens of thousands of Turks have been waiting years for TOKI housing.

Pro-government commentators moved to support Erdogan, regardless of many AKP supporters' wariness about Syrians receiving citizenship. Erdal Tanas Karagol, a writer for the daily Yeni Safak, argued that the Syrians would not take jobs from Turks, but would contribute to economic growth, like Turkish workers in the past who moved to Germany.

Karagol wrote, “We read about how academics, doctors, engineers, teachers and other white collar workers are going to rich countries because they do not have Turkish work permits. Why should Turkey, which has extended a helping hand and paid a high price for this, not avail of this human resource?”

Although his argument might have some merit, he will not convince many Turks of it, because Germany had a labor shortage when the Turks were invited, which is not the case with Turkey today. The overwhelming majority of Syrians here are thought to be poor and unqualified peasants or city dwellers likely to strain Turkey’s labor market.

Osman Koruturk, a retired ambassador who served as special envoy to Iraq during 2003-2005, believes that Erdogan’s announcement will likely make conditions for the Syrians even worse because of the public backlash it has created.

“It is very unlikely that citizenship will be given to the Syrians en masse,” said Koruturk, currently a deputy for the main opposition Republican People’s Party (CHP). “There is no example in the world for this. Individuals can apply for citizenship through regular channels, of course, but that is not what is being talked about here.”

He also spoke to Al-Monitor about the claims that Erdogan is using the Syrians to try to shore up his public base of support. “[Erdogan] is saying that the Syrians can be settled in certain parts of the country. This suggests that he has demographic considerations in mind,” Koruturk said. “However, there has been no proper vetting of Syrians entering Turkey, so there is no guarantee that they would vote for Erdogan or the AKP if they became citizens. Not everyone from Syria fled from Assad. Many simply fled the war.”

The bottom line is that the Syrians are in Turkey, and the problems resulting from their presence are likely to last for years. Turkey has to cope with this problem, one way or another, in a realistic manner.

Erdogan’s unrealistic approach, however, appears to be exacerbating the problem rather than offering solutions. Even if Syrians are granted citizenship, most will recognize that it is not the panacea they might desire. They will also see that Turkey is not necessarily an accommodating country when it comes to issues related to basic subsistence, which is something with which most Turks must cope.