The government’s attempt to be politically correct in its condemnation of the attack on Charlie Hebdo is not reflected by all elements of the ruling party and the Islamist media. 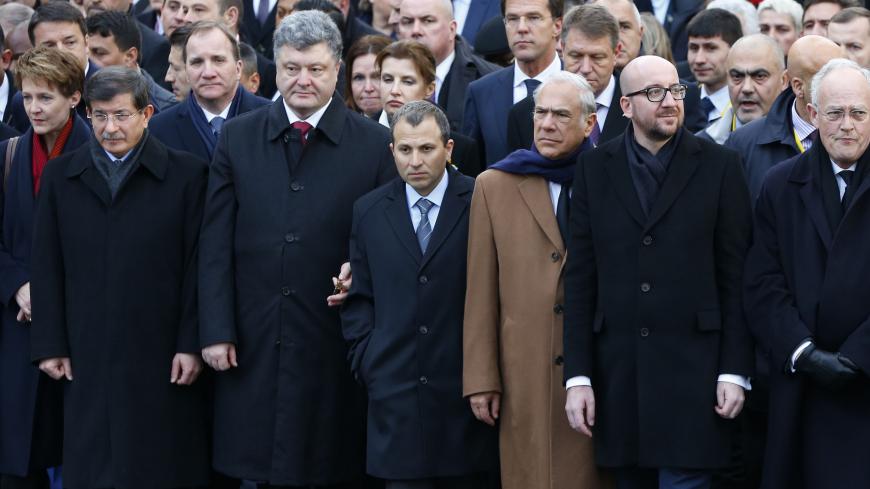 The attack against the magazine Charlie Hebdo in Paris, and the ensuing massacre, reverberated in Turkey perhaps more than in any other Islamic country. This is not surprising since Turks are divided along the Islamist-secularist fault line, and are absorbed in their own debates about freedom of expression, and respect for different beliefs and lifestyles.

This divide was also apparent in the positions of various commentators in the Turkish media after the Paris attacks. The stance of liberal and secular commentators can be summed up easily because they reflected the positions of many of their Western counterparts. Many of them also joined liberal and secular Turks rallying outside the French Consulate in Istanbul, carrying placards reading “Je Suis Charlie” (I am Charlie).

The situation on the Islamic side of the fence, however, showed variations with some providing well-known caveats, while others had conspiracy theories to explain what lay behind this attack. There were also influential Islamic voices who said Muslims had to unconditionally condemn and distance themselves from these attacks.

Aware of the sensitivity of the matter, and the fact that eyes in Europe and the United States were on him, President Recep Tayyip Erdogan, who can be abrasive when it comes to the difficulties faced by Muslims in the West, remained politically correct on this occasion.

In his statement, Erdogan said that terrorism has no religion and nationality and could not be condoned under any circumstance. “It is very important that we stay united against all attempts to show the kind of terrorist attack seen in Paris as an excuse for enmity based on religious and cultural differences,” Erdogan said, making no reference to Islamophobia in the West.

Prime Minister Ahmet Davutoglu and most of his Cabinet members expressed similarly diplomatic views, condemning the attack without any qualifications or attempts at rationalizing it in anyway. The only statement to raise eyebrows among Western diplomats in Ankara came, surprisingly enough, from Foreign Minister Mevlut Cavusoglu.

Pointing out that he condemned such acts of terrorism regardless of their aims, Cavusoglu nevertheless qualified his words. “Another factor that threatens Europeans and their values, which we have been underlining for years at every platform, is the increase in racism xenophobia, discrimination and Islamophobia in many parts of Europe,” he told journalists in Ankara. “These currents and terrorism have a direct influence on each other,” Cavusoglu added, saying “freedom of belief” also required respect.

Western diplomats were clearly bemused by these remarks. “This is not the time for sociological explanations about what caused the Paris attack. This is the time to stand united and firm against an act that offends all decent people around the world,” a senior diplomat, speaking on condition of anonymity because of his sensitive position, told Al-Monitor.

Prior to departing for the Jan. 11 rally in Paris, Davutoglu said he was traveling to the French capital to do precisely that. He said his aim was to demonstrate that “Turkey has taken the clearest stand against all forms of terrorism and to show active solidarity with others in this regard.”

Western diplomats were less upset with Justice and Development Party (AKP) deputies and Islamist commentators trying to rationalize the reasons behind the Paris attack, and who came up with wild theories about what actually lay behind it. The explanation given to Al-Monitor by these diplomats was that such views were highly predictable given their sources.

Ali Sahin, a deputy from the southeastern city of Gaziantep, and a deputy head of the AKP who is also a member of the parliamentary Foreign Affairs Committee, claimed, for example, that the attack against Charlie Hebdo “was staged like a scene from a movie.”

Providing eight reasons on his Twitter account why he believed this attack was perpetrated by sinister forces seeking to discredit Muslims, Sahin pointedly asked how it was possible for terrorists known to the police to get away so easily in the well-monitored streets of Paris after attacking the protected offices of Charlie Hebdo.

Yusuf Kaplan, a columnist for the Islamist and pro-government daily Yeni Safak, did not mince his words and spelled out clearly what Sahin was getting at. “After this attack, racism, Islamophobia and enmity toward Muslims is going to peak. A hunt against Muslims will begin,” he wrote in his column. “This is an attack planned by the deep state in France to increase Islamophobia. It is a cunning postmodern crusade against Islam,” Kaplan alleged.

The harshest reaction to such claims came from Islamic quarters. Abdullah Bozkurt, a prominent columnist for Today’s Zaman — which promotes a liberal Islamic outlook — pointed to “the provocative headlines” in what he called “the government-subsidized media” and said these were effectively justifying this attack.

He also criticized what he referred to as “the restrained reaction of the ruling Islamist establishment” to the attack. These, he said, had “exposed once again the chilling totalitarian mind-set of believing twisted conspiracy theories that exist among Islamists who are biased and unable to reject cold-blooded murders unconditionally without any proviso.”

Soli Ozel, a well-known Turkish commentator on international relations and political affairs, also believes the government could have been much more forthright and unrestrained in its condemnation of the Paris attack.

“If this had happened seven years ago, Turkey’s condemnation would have been much stronger and more genuine, rather than trying to merely be politically correct,” Ozel told Al-Monitor.

There were nevertheless influential Islamic voices calling for the correct response to be shown by Muslims to this attack.

“This is first and foremost a terror attack that has to be condemned severely. If we consider that it was immediately attributed to Muslims, our reaction to it must be much more intense,” former President Abdullah Gul, who is also a founding member of the AKP, said in his statement. “We have to show that these people have nothing to do with Islam and that there is no sympathy for them whatsoever,” Gul added.

Mehmet Gormez, who heads the Directorate for Religious Affairs, which appoints imams and monitors their activities in Turkey, also called on Muslims to condemn such acts regardless of the reasons behind them.

“No Muslim can respond to the disrespect shown to the Prophet Muhammad with ugly methods that he would never have approved of,” Gormez said. “This attack was carried out against all humanity that values peace, whether one is religious or not, or whatever one’s religion may be,” he added.

Fehmi Koru, a veteran Islamic columnist who writes for daily Haberturk, for his part, tried to strike an honest view with regard to Islam and violence. “Islamic history, since its first century onward, is unfortunately a bloody one. Koru wrote after the attack in Paris.

“None of us are innocent. … How much have we developed? How clever have we become? Our development and cleverness have served only one purpose: We are capable of more bloodshed with developed weapons,” Koru added. His words point to the need for some soul-searching in the Islamic world.

Ozel believes this could be one of the few positive outcomes for Turkey from the dreadful massacre in Paris perpetrated in the name of Islam. “This attack came in the middle of a debate in Turkey about Islam, which will most likely grow even more intense now,” Ozel predicted.