The victims of the Charlie Hebdo attack found sympathy in Gaza, until Israeli Prime Minister Benjamin Netanyahu participated in the Paris unity march and the magazine published a cover with a depiction of the Prophet Muhammad. 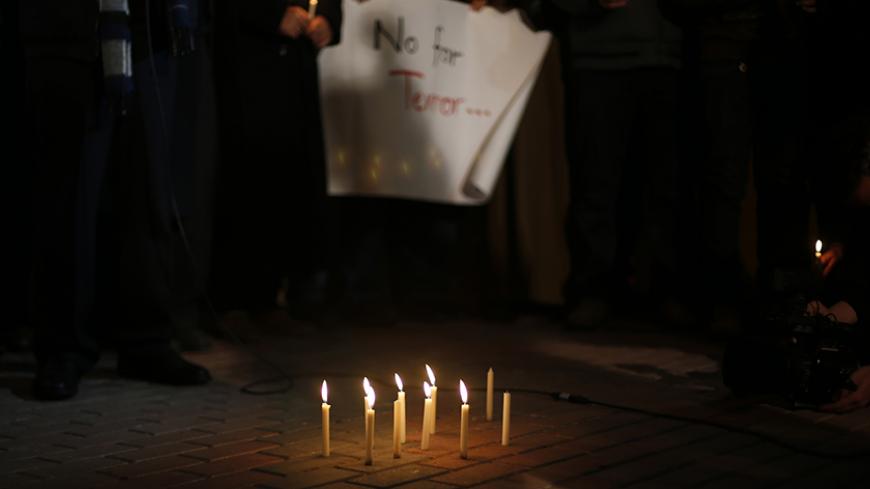 Candles flicker on the ground during a demonstration against the murderous attack on the satirical French newspaper Charlie Hebdo, outside the French Cultural Center in Gaza City, Jan. 11, 2015. - REUTERS/Suhaib Salem

GAZA CITY, Gaza Strip — Gaza remembers the entire world, but the world does not remember Gaza. This is what went through my mind when I saw Facebook users from the Gaza Strip declaring their solidarity with French magazine Charlie Hebdo. Many have condemned the storming of the magazine’s headquarters and the killing of cartoonists in the name of defending Islam since the incident occurred on Jan. 7.

Youth activist Mohammed Matar, known as Abu Yazan, wrote on his Facebook page: “As a Muslim, I find the murder of innocent people more despicable and offensive than any cartoon could ever be.” In addition, a photo circulated on social networking sites showing a group of children in Gaza holding signs in solidarity with Paris, as well as another photo of a girl from Gaza carrying a sign that read: “Not in my name.” Activist Majed Abusalama uploaded a picture that read “Je suis Charlie” on his Facebook page, along with poignant words condemning the killing of innocent people.

Everyone expects puritanical reactions from Gaza because it is under the rule of Hamas, the Islamic resistance movement. However, its reaction this time was exactly the opposite. Gaza’s experience with three wars in seven years, during which thousands have lost their lives due to the Israeli war machine, is enough for it to feel solidarity with others.

Hamas itself published a statement on Jan. 10 condemning the Charlie Hebdo incident: “Hamas confirms its stance regarding the recent incidents in Paris, which is consistent with the statement made by the International Union of Muslim Scholars denouncing and condemning the attack on Charlie Hebdo. No difference of opinion is an excuse to kill.”

Civil society organized a solidarity march in front of the French Cultural Center in Gaza City on Jan. 11, the same day that millions marched in Paris, and a number of activists and employees of international organizations in the Gaza Strip joined.

Participants in the solidarity march, which Al-Monitor attended, carried candles and banners that read “No to terrorism” and “We are victims of the occupation’s terrorism, we say ‘no to terrorism.'”

Raj Surani, the director of the Palestinian Center for Human Rights, told Al-Monitor, “The French always took a strong stance for justice, condemning what Gaza faced.” He continued, “Today, Gaza, which is suffering from the blockade and war, is standing in solidarity with the French people against terrorism, which is not exclusive to a single nationality or religion.”

Standing nearby at the march was Nasser Aliwa and his wife, carrying candles in front of the French center in solidarity with Paris, where their son works and daughter studies. “Based on the Islamic religion and morality, and in rejection of all forms of fascist repression, as a people stung by terrorism — whether from Israel or religious groups — today we stand with France,” Aliwa told Al-Monitor.

Yet, the solidarity soon changed to ridicule and indignation on social media, after an image was circulated of Israeli Prime Minister Benjamin Netanyahu leading the massive march in Paris. Scenes from the war returned with force to social media sites, recalling how Israel killed 13 journalists.

Commenting on the security services’ march, journalist Tamer Lubbad wrote on his Facebook page: “[Gaza spent] 51 days under the cinders of missiles and tanks, and they didn’t take any action to support us.” Meanwhile, Hamas spokesman Ihab al-Ghussein wrote on his page, “A terrorist in Paris,” commenting on the photo of Netanyahu.

A number of Photoshopped images circulated that ridiculed Netanyahu’s participation in the march against terrorism in Paris. In one image, the front row of the march, which included other leaders alongside Netanyahu, was Photoshopped over an image of the destroyed Shajaiyah neighborhood in Gaza. In another, Netanyahu was crying out “Charlie Hebdo,” while sitting atop dozens of bodies from the Gaza Strip.

Gradually, the primary incident — the killing of 17 French citizens — left people’s minds. The presence of Netanyahu became the main topic, despite the fact that Israeli newspapers said he was an unwanted guest.

Yet, the cover of the latest edition of Charlie Hebdo, which depicted the Prophet Muhammad crying and carrying a banner reading “Je suis Charlie,” changed everything. Any expression of solidarity with Paris on Gazans’ social media pages became akin to a statement of hatred or a declaration of support for the enemy. These statements of support among activists were replaced by a new phrase, “Je suis Muhammad.”

Satirical writer Ayman al-Aloul and others organized a march in front of the French Cultural Center in Gaza City to protest the insulting of the prophet, calling for a boycott of France. However, he was quickly summoned by the investigative services in Gaza City for organizing an event without a permit.

Within hours, unidentified persons filled the walls of the French Cultural Center with statements and graffiti objecting to the insulting of the prophet, with phrases such as “[Anything] except the Messenger of God.”

For its part, Hamas condemned Charlie Hebdo’s publishing of cartoons insulting the prophet. In a statement released Jan. 14, Hamas spokesman Fawzi Barhoum said, “This act is considered a clear provocation against all Muslims in the world, and indicates a determination to instill a culture of hatred and incitement of violence against them.”

Thus, the murders at Charlie Hebdo shifted from a source of human solidarity among different religions and places — such as Gaza City, whose residents have not forgotten what happened to them last summer — into a point of division and anger to defend the prophet. Islamic parties in Gaza used it to gain the sympathy of the masses, while Israel took the opportunity to call on France’s Jews to emigrate. The sanctity remains freedom of expression, yet this sanctity is ostracized by those who champion it.