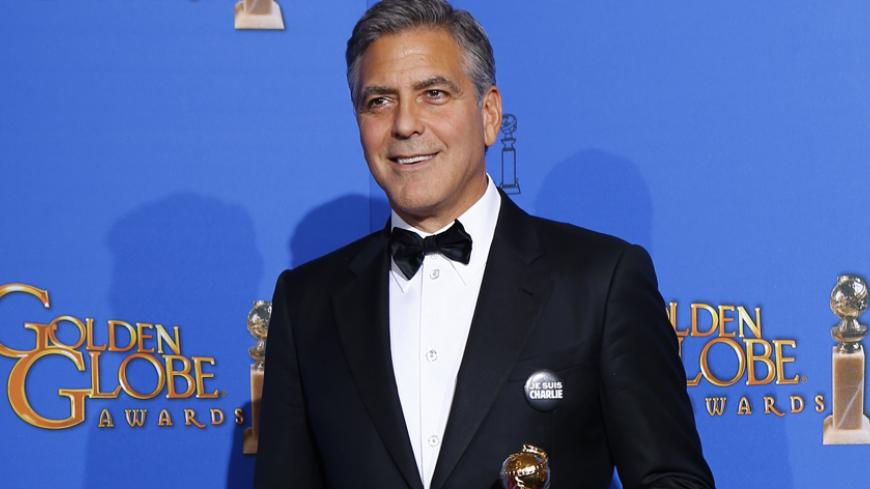 Iranian officials and most Iranian media outlets have condemned the attack on the French satirical magazine Charlie Hebdo by Muslim extremists in which twelve people were killed. However, most officials have also condemned the magazine for publishing images that they consider insulting to the Prophet Muhammad.

A Reformist newspaper in Iran appears to have gone too far in its support of the global and viral “Je suis Charlie” campaign to show solidarity with the magazine — and not far enough in its condemnation of Charlie Hebdo for insulting the prophet of Islam.

On Jan. 13, Mardom-e Emrooz' front page featured a full-page image of actor George Clooney standing with a Golden Globe award with a “Je suis Charle” ("I am Charlie") pin on his jacket. The top headline read, “Clooney: I am also Charlie.” The paper also published Clooney’s comments that millions in Paris “marched in support of the idea that we will not walk in fear. Je suis Charlie.” 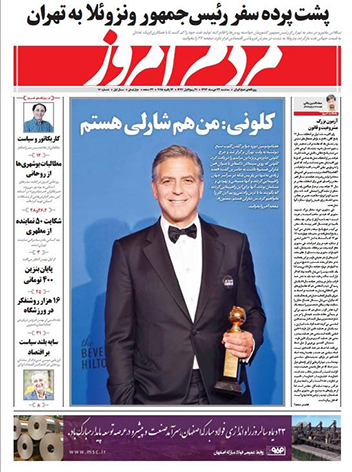 The response from conservative members of parliament and conservative media outlets has been harsh and President Hassan Rouhani’s culture minister has taken heat for not taking a strong stance against the newspaper.

Conservative parliament member Zohreh Tabibzadeh said, “In the case that this newspaper is not confronted firmly, the impeachment of the culture minister is likely.” She added that rather than supporting these publications, “We have to take an opposing position” and “A firm confrontation with the desecration of the status of the Prophet Muhammad is the duty of every Muslim.”

Another conservative parliamentarian, Hamid Rasaei, also reportedly gathered 70 signatures calling for Mardom-e Emrooz to be “severely confronted.” Ahmad Salek, the head of the parliamentary cultural committee, said that the front page of Mardom-e Emrooz “reinforces removing sanctity inside the country.” He said that the Culture Ministry will be issued a warning and that it should pay closer attention “to the current condition of the media.”

Kayhan newspaper, whose editor is appointed by Supreme Leader Ayatollah Ali Khamenei, reported that Iranian newspapers who supported the campaign had essentially “declared their cooperation” with Islamophobia. In regard to Mardom-e Emrooz, the article read, “It’s not clear for what reason this newspaper chose as its headline an insult to the prophet of Islam.”

The article condemned the double standards of the Media Supervisory Board, which operates in the offices of the culture minister, for summoning a conservative newspaper over speculation about the death of the king of Saudi Arabia but has “been silent” regarding newspapers who support publications that insult the Prophet Muhammad. The article continued that this was “overt legal discrimination” on behalf of the Culture Ministry.

In an interview with Fars News, the editor of Mardom-e Emrooz, Mohammad Ghouchani, a famous Reformist who has headed some of the most well known Reformist papers, said that the cover had been created before Charlie Hebdo reprinted the “insulting cartoon” of Muhammad. In its first issue back after the terrorist attack, Charlie Hebdo republished another image of Muhammad holding a “Je suis Charlie” sign with the headline, “All is forgiven.”

Ghouchani reassured conservative Fars News that the publication would “reflect the protest of Muslims and other countries to this French publication, and this newspaper will state its judgment.”