Turks have taken to social media to criticize or applaud their government's reaction to the Charlie Hebdo attacks in Paris, though some individuals have threatened a Turkish newspaper with violence after its publication of Charlie Hebdo cartoons. 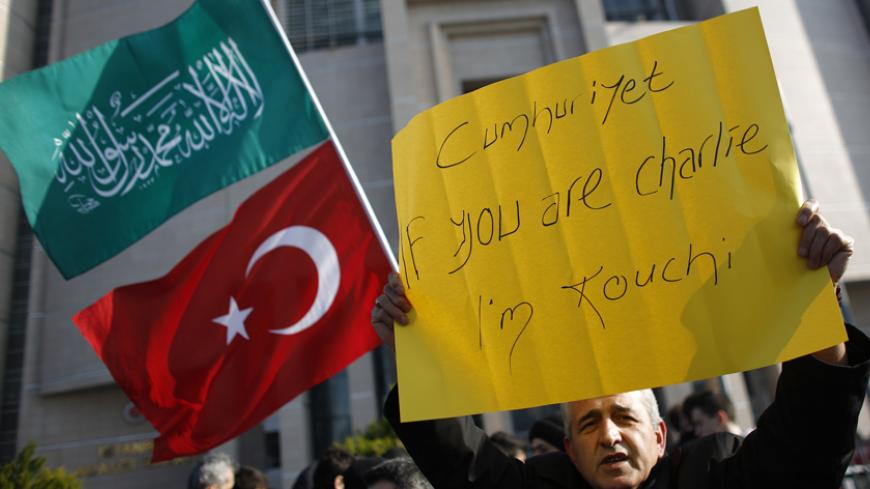 A demonstrator holds a banner as others wave Turkish and Islamic flags during a protest against Cumhuriyet, a staunchly secular opposition newspaper that had republished Charlie Hebdo cartoons, in Istanbul, Jan. 15, 2015. - REUTERS/Murad Sezer

On Jan. 11, when Turkish Prime Minister Ahmet Davutoglu marched alongside world leaders in Paris to honor the victims of the Charlie Hebdo attacks, back in Turkey, members of the Aczimendi religious order performed funereal prayers to honor the perpetrators of the attacks. Other religious groups tweeted public invitations to prayer sessions for the perpetrators. Referred to as the “Kouachi brothers,” these men were not terrorists in the eyes of several religious sects in Turkey.

Indeed, in the Justice and Development Party (AKP) municipality of Tatvan in Bitlis province, a billboard was posted, reading: “May peace be upon the Kouachi brothers who sought the revenge of the Prophet. When you [Western world] kill it is called democracy, when we seek revenge [it is called] terrorism.” Tatvan’s mayor told the media that individuals posted the sign without the knowledge of his office and it was promptly removed. Yet, it was enough to cause a stir on social media. One tweet read: “A manly statement from Tatvan. While some are fawning over the French [dogs], Tatvan is standing tall.” The tweet used #Parismarch as a hashtag, indicating the user's disapproval of Davutoglu’s participation in the march.

It seems Davutoglu was not able to please any group in Turkey by attending the Paris solidarity march. AKP parliamentarian Burhan Kuzu tweeted: “Yesterday’s death toll was 2,000 in Nigeria, 83 in Iraq, 38 in Yemen, 26 in Syria, 16 in Afghanistan and 12 in France. But the whole world spoke only about the 12 in France.” A Twitter user gave a tongue-in-cheek reply: “Well, right, then why is Davutoglu not going to Nigeria but France?” Kuzu did not reply. Davutoglu’s attendance at the rally brought satire to a new level in Turkish social media. First, a short video appeared showing Davutoglu trying to make his way to the front row of the march, ever so gently pushing a woman. Then another video appeared, in which French President Francois Hollande greets several participants with kisses on both cheeks, but avoids kissing Davutoglu. Satire masters have dubbed the voice of a famous Turkish comedian over the clip, saying, “Me, me, now me! Why not me?” as Davutoglu waits in vain.

On the other side of the spectrum is the opposition to the AKP. Secularists among the opposition struggled to grapple with the reality that these religious orders and political entities — such as a Twitter account titled Jabhat al-Nusra in Turkish — could act so boldly in public in a country where freedom of expression is strictly regulated. One person tweeted the prayer announcement for the Kouachi brothers, adding: “These groups get the courage from [President Recep Tayyip] Erdogan, who told them 'be offensive.'"

In the Eksisozluk social forum, contributors ridiculed how pro-AKP pundits — who initially argued that the Charlie Hebdo attack was an attack on Muslims in Europe to provoke global Islamophobia — were now defending the actions of the Kouachi brothers.

The debate as to why Davutoglu went to Paris was intense for the pro-AKP pundits. Almost a week after the decision to attend the march, AKP media were still trying to justify Davutoglu’s decision to appear alongside Israeli Prime Minister Benyamin Netanyahu in a photo.

The opposition considered Davutoglu’s show of solidarity with the free world insincere, as well as good material for satire. Meanwhile, Charlie Hebdo published its first issue after the attack on Jan. 14. The issue was translated into Turkish and the left-leaning Cumhuriyet daily agreed to publish it. A small but determined group of individuals protested outside the newspaper's office, promising revenge and chanting slogans like, “If you are Charlie, we are Kouachi” and “Kouachi brothers are our pride.” The newspaper’s editors and two of its seasoned journalists are being investigated for “provoking public sentiment.”

Davutoglu told the press: “You cannot argue press freedom if you are publishing material that almost screams come and attack me. We cannot equate freedom of press with insulting the people.” Promptly, access to websites that shared the Charlie Hebdo cartoons in Turkish were banned. Turkish Airlines announced that it would no longer carry Cumhuriyet daily at its lounges or on flights. As news spread of protests in front of Cumhuriyet and police raids on the newspaper's printing house, Davutoglu said, in tacit support of such actions: “In this country, we don’t allow insults to the Prophet. This is a very clear, sharp and principled stance. Everybody should know this. This matter has also been explained to the press institutions.”

Social media reactions to the Turkish bans were strong. “If you [Davutoglu] were going to ban everything related to Charlie Hebdo magazine, why did you attend the Paris march? And you pushed the woman to make it to the front row!” ridiculed one user. The Turkish publication Zaytung News — similar to The Onion — published satirical commentary from Davutoglu: “Let there be no misunderstanding, I marched for freedom of expression in France! Free press in France cannot be silenced!”

Pro-AKP pundits and the party's social media army worked diligently to maintain resistance in the face of the difficult events and the mockery of the opposition. Popular author Ali Cimen observed: “Aiming for a devout generation, your legacy [referring to Erdogan] will be a bunch of zombies with no brains using profane language.” Indeed, in an attempt to tackle the “Je suis Charlie” fervor, a pro-AKP troll @esatreis changed his profile photo to “Je suis Mohammad” and urged his followers to do the same. His passion taken a step too far, @esatreis faced harsh criticism and ridicule from devout Muslims, who said it was offensive to declare oneself the Prophet. Realizing there was no way out of this one, @esatreis deleted the logo and tweeted: “Thanks to those who warned that the 'Je suis Mohammad' slogan might be troublesome, let’s use this one 'Je suis Muslim.'" There was nothing wrong with the hashtag “Je suis Muslim,” though it's a French-English mismatch. The original French version, #JeSuisMusulman, has been trending since the first day of the attack.

“Islamists do not come in one shape, not even the most radical ones,” a Turkish academic told Al-Monitor. Raised in a secular family, growing up drinking raki and dating too many girls, the academic went through a transformation about three decades ago. “The most difficult part is not giving up alcohol, or partying. The most difficult part of being a devout Muslim in Turkey is that the people look at you and see a killjoy. And it is a challenge to even talk about fun in the midst of so much anger and despair among Muslims.”

For days leading up to the Jan. 14 publication of the latest Charlie Hebdo, pro-AKP figures in Turkey were almost on the defensive. All their attempts to justify the killings were tackled with a deep black humor of the opposition camp. However, once Cumhuriyet printed a few of the Charlie Hebdo cartoons, the tide reversed. It now seems that many of the radicalized sections of Turkey's Islamist crowd are seeking revenge. Unfortunately, threats of violence — to the extent of publishing journalists' home addresses — is the only way these groups know how to tackle opposition.