Turkish satirical journalists and cartoonists have been warned via phone and over social media to "learn" from the attack on Charlie Hebdo and be careful who they antagonize. 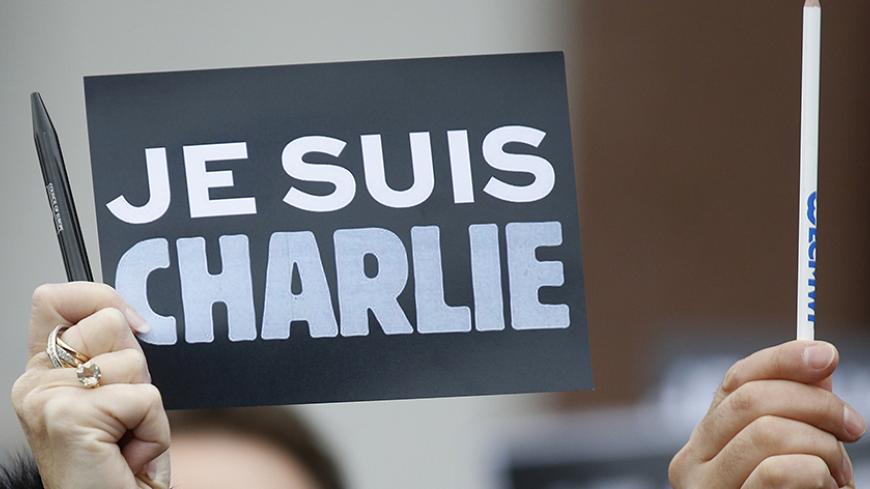 I learned about the Charlie Hebdo attack from a phone call in the early morning hours of Jan. 7. The messenger was a political satirist and friend calling from Istanbul. He was calm as he explained the brutal attack. Then he said, “I received a call from a private number. The voice on the line ordered me to turn on the television to take a sneak peak at my own future.” It was not the first time my friend had been threatened. When I asked what he was going to do, he replied with his usual dark humor, “I will first mourn the loss of my colleagues and caricaturize my sorrow.”

Reactions among the Turkish public to the attack in France have varied widely. One group includes Turks showing solidarity with the #JeSuisCharlie hashtag on social media. One can see the high volume of solidarity tweets from Turkey on the day of the attack. There were also protests on the streets of Istanbul.

The Joint June Movement — a protest platform keeping the Gezi spirit alive and known for its opposition to the Justice and Development Party (AKP) — organized a “We are Charlie” march with the slogan “We are not afraid.” Turkish cartoonists also joined in the global movement to stand in solidarity with the victims and their colleagues, publishing and sharing dozens of Charlie Hebdo cartoons and dedicating drawings to the victims.

Tuncay Akgun, executive editor of the prominent Turkish satirical magazine Leman, shared photos of the deceased Charlie Hebdo artists over social media with the caption “They were our friends.” Accompanying a photo of cartoonist and writer Georges Wolinski on a visit to Istanbul's famous Eyup Sultan Mosque, the publication asked, “Is this man the enemy of Islam?”

The well-known cartoonist Musa Kart, who has been sued by Turkish President Recep Tayyip Erdogan several times, drew a searing cartoon with a character resembling Erdogan saying, “I condemn the attack. A 10-year prison sentence for those cartoonists would have been sufficient.” Political caricaturist Semih Poroy told Al-Monitor, “Cartoonists are without protection in Turkey. If freedom of speech is not guaranteed, some might even be inspired by the inhumane events of the Charlie Hebdo attack and try to repeat them.”

Another group of Turks immediately went on the defensive, taking the position that the attackers do not represent "real Islam" and that the attack is against Muslims, too, as it will inevitably increase Islamophobia in the West. Turkey’s top cleric, Mehmet Gormez, head of the Directorate of Religious Affairs, fits in this group.

Gormez held a press conference Jan. 8, a day after the attack, and was criticized over social media for having not immediately condemned it. When he was asked what he thought about the attackers screaming “Allahu akbar!” (God is great), Gormez responded, “They are mocking the minds of people, not only of Muslims but also the Western community. They aim to manipulate the basic values of Muslims. They are abusing the name of Allah.” He also warned Muslims around the world to be vigilant against rising Islamophobia and argued that the attack in Paris was a direct assault on Islam.

It is an odd balance the members of this group are trying to maintain. They condemn the attack, but then follow with “However …,” and a justification of how Charlie Hebdo constantly provoked and offended Muslims. This group maintains a deep suspicion that Muslims did not carry out the attack. Rather, they blame people who supposedly want to put Muslims in the crosshairs. They are angry at social media users who suggest that the attackers might belong to an Islamist organization or that they reportedly yelled, “We avenged the Prophet!”

Another group is even more worrisome, oscillating between feeling almost satisfied with the attacks, citing justifications for it, and expressing anger toward anyone who might tie the attacks to Muslim perpetuators. “Should we condemn the event in France?” reads the headline of the Jan. 8 column penned by Ali Karahasanoglu for the right-wing daily Yeni Akit.

Karahasanoglu wrote, “I would not think about being involved in an attack as such, or advise anyone to engage in violence, but when asked whether I condemn it or not, I say, ‘Wait a minute.’ Because they ridiculed Islam. With their drawings, they scorned and belittled the prophet. Indeed, their editorial line was based on mocking people. They did not listen to the warnings of those who told them to change their course. Then, when something happens to them, why expect us to condemn it? Not that easy.”

Karahasanoglu then elaborated on the daily bloodshed in the Muslim world and complained that no one hears these Muslims' cries. He ended his piece with the argument that the West supports those who contribute to killing Muslims and then asks for condemnation when 12 people are killed in the West. “There is no such world,” he concluded.

Yeni Akit also reported under the headline “Protesters in Paris offended our prophet again,” because someone carried a sign of a stick figure the Prophet Muhammad saying, “Je suis Charlie” (I am Charlie).

One news outlet, Haber Seyret, published a column by Saliha Eren headlined “We do not have to apologize to anyone because we are Muslims.” Several Islamist newspapers and networks picked it up. Eren wrote, “I do not care what happens in France, when several children are dying from the cold in refugee camps in Syria, Lebanon and Jordan with aid cut off from the UN.” She argued, “We are not going to care about your grievances until you stop putting the blame for each act of terror on Muslims.”

In the meantime, several established Twitter accounts known as AK Trolls — “AK” being the AKP — posted a number of mind-boggling tweets. One of the most popular and controversial AK Troll accounts, @esatreis, wrote, “This evil act [referring to the offensive Charlie Hebdo cartoons] cannot be justified with the argument that ‘They also drew cartoons of the pope.’ To attack a religion is a bigger terrorism than an armed attack.”

A similar argument can be found in Inspire, the al-Qaeda magazine, which listed its 10 Most Wanted for Crimes against Islam. The list does not contain anyone involved in armed conflict or violence. The main crimes of those listed has been to somehow offend Islam and the prophet, like @esatreis told the Turkish Twittersphere. Also in the news was @AKKULIS, who features an Erdogan photo on his profile page. He tweeted, “This is a setup against Islam. Killers and victims are all French, so what is it to us?” Another Twitter user in this category took it up a notch, saying, “May they [the victims] rest in hell.”

The hatred toward the cartoonists almost oozes from such comments. Seasoned journalist Emre Uslu, affiliated with the pro-Fethullah Gulen media, suggested that AK Trolls seemed almost happy about the attack. Yet, the worst from among this group came from the account @GizliArsiv, which threatened Leman, warning, “Take a good lesson from the attack.” Remarkably, the user's grievance wasn't about the publication offending Islam or the prophet — but Erdogan. The tweet included a snapshot of a series of Erdogan cartoons and accused Leman of being disrespectful to him.

Although most members of this last group were anonymous, the Vahdet Daily columnist Ibrahim Yoruk tweeted to another Turkish satire magazine, Penguen, saying, "Learn from their mistake: There can be no humor with Islamic faith." Another user, Kerem Cenk, allegedly wrote, “The number of heads to be taken out in Leman magazine is more than 12.”

What was the official political reaction to this intense public debate, even before news of the attack solidified? Umut Oran, a parliamentarian from the main opposition Republican People's Party, told Al-Monitor that he had submitted a parliamentary question to the prime minister asking what kind of security measures had been put in place to protect the cartoonists of Leman and Penguen, who have been blatantly threatened. Cartoonists in Turkey are used to violence, including arson attacks and guns being fired at their offices, but at a time of mourning on this scale, the degree of blatant, unquenched anger against them is nonetheless frightening.