As the Turkish president's wrath reaches German satirists, their Turkish colleagues soldier on amid constant intimidation, prosecution and even physical attacks. 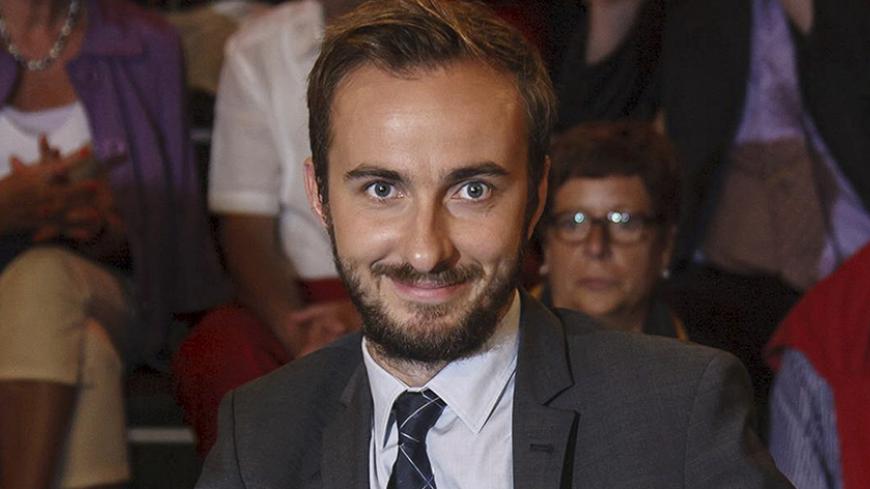 Jan Boehmermann, host of the late-night "Neo Magazin Royale," is pictured during a TV show of Markus Lanz in Hamburg, Aug. 21, 2012. Turkish President Recep Tayyip Erdogan has filed a complaint against the comedian, who recited a satirical and sexually crude poem about him on German television. - REUTERS/Morris Mac Matzen

Turkish President Recep Tayyip Erdogan’s wrath at the media recently reached Germany, bringing Berlin and Ankara to a diplomatic confrontation over German TV programs satirizing the Turkish leader. Amid tensions simmering since mid-March, the Turkish Foreign Ministry summoned the German ambassador in protest March 22 and sent Berlin a formal request for the prosecution of a comedian for insulting Erdogan in a poem recited on a satirical TV show.

With thin-skinned Turkey now raising a ruckus even across borders, what about the state of its satirists at home? As one would guess, they're not having a golden era. Turkey’s more prolific cartoonists, in particular, are under constant threat of trials and bullying, a climate they describe as worse than the military rule after the 1980 coup, often referenced as the lowest point of freedom and democracy in Turkey. In one cartoonist’s words, while previous leaders used the courts to discourage criticism, Erdogan acts with “exterminatory” motives.

According to Zafer Aknar, editor of the popular satirical weekly magazine Leman, more than 20 charges have been brought against it since the Justice and Development Party (AKP) came to power in 2002. Two judicial probes are still ongoing, one of which far surpasses any satire in its ludicrousness. On March 30, Leman depicted Erdogan taking a selfie with a mukhtar — one of the village leaders he convenes at the presidential palace as audience for his weekly tirades out of spite for the British consul-general in Istanbul. Foreign diplomats had attended the trial of journalist Can Dundar and took a selfie with him in a gesture of support. A group of mukhtars lodged a complaint against Leman over the cartoon, claiming defamation because the fictitious mukhtar looked like Kurdish rebel leader Abdullah Ocalan. The prosecutor took the complaint seriously and opened an investigation.

For Aknar, the prosecutor’s move shows how insecure and wary the judiciary itself has become. “Several folks complain and the prosecutor goes ahead out of fear. This has nothing to do with law,” Aknar told Al-Monitor. “Sometimes we really overdo it and we stand trial. That’s not a problem. The problem is in arbitrary action. The probes are being launched arbitrarily according to the leaders’ moods.”

Sefer Selvi was the first cartoonist to stand trial under the AKP for depicting Erdogan as a horse being led by an adviser. In 2003, the court fined Selvi for the cartoon, published by Evrensel, but the ruling was later overturned on appeal.

After Selvi, Cumhuriyet cartoonist Musa Kart was taken to court in 2004. Kart had depicted Erdogan as a cat entangled in a ball of string, which symbolized the problems he faced. But Erdogan could not tolerate being portrayed as an animal. In a show of support for Kart, Penguen magazine, a favorite of Turkish satire lovers, depicted Erdogan as eight different animals in a memorable cover headlined “The World of Tayyips.”

Though the magazine earned itself eight claims of damages — one for each animal — Metin Ustundag, who was then on Penguen’s editorial board, believes the show of solidarity checked the government for a while thereafter. “‘The World of Tayyips’ was our way of saying, ‘We are all Musa Kart.’ For the first time, the cover was drawn collectively by eight people,” he told Al-Monitor. “We had drawn a Tayyip face also on the small penguin in the logo, which they noticed later and asked for an additional 5,000 Turkish lira [$1,800] in damages. [But] this joint reaction led them to step back a bit.”

Past leaders like Turgut Ozal, Suleyman Demirel, Necmettin Erbakan and Bulent Ecevit showed more tolerance for criticism, though Turkey’s courtrooms and prisons were never short of journalists, writers and cartoonists, especially after the 1980 coup. Ustundag recalled how he lampooned coup leader Kenan Evren, politicians and even their wives on his TV show in the 1990s. “We never got warnings or threats,” he said.

The popular cartoonist sees a big difference between past and present court cases. “Previous leaders would sue symbolically, seeking harmless damages like 1 or 5 Turkish lira. They sought convictions as a warning. Erdogan’s lawsuits, however, are exterminatory. He sues to bring magazines down and ruin cartoonists economically,” Ustundag said. “The government refuses to understand that satire always sides with the weak and inevitably targets those in power. … They can’t get that.”

Vedat Ozdemiroglu, who writes for Uykusuz magazine, believes intolerance for humor is a common trait of right-wing politicians globally. “[Turkish leaders] do what rightists do around the world. They do what they did to Charlie Chaplin in the United States,” he said. “They cannot tolerate new ideas.”

But does all this mean that no one in the AKP ranks sympathizes with the satirists? Ustundag said Penguen's staff knew that former parliament Speaker Bulent Arinc had tried to talk Erdogan out of suing Penguen for “The World of Tayyips” and instead pay a friendly visit to the magazine, but was rebuffed.

Erdogan’s response to humor is not limited to lawsuits. He regularly attacks his critics from public platforms, creating an even more toxic atmosphere that emboldens his supporters to take matters into their own hands. In May 2012, for instance, Penguen’s office was torched. Ustundag and another employee were rescued by firefighters. A police station was just across the street, but its security cameras somehow turned out to be broken when the search for the arsonists began. This was hardly a surprise, as security cameras in Turkey are known for being police-friendly and have a habit of going dark when state-sponsored criminals are around.

Turkish satirists may be accustomed to courtrooms, but government-backed vigilante violence is something new.

“The climate has toughened a lot. The pressure may not have caused self-censorship, but it has sparked fear. We fear individual attacks like the torching of Penguen because we are directly shown as targets,” Ustundag said. “We didn’t even publicize the arson attack because some folks might say, 'Let’s go finish the business the others failed to carry out.' We’ve come to fear for our lives.”

Selvi said even acquaintances would sometimes avoid him and fellow satirists, worried about being seen publicly with government critics. After the attack on Charlie Hebdo's offices in Paris, Leman was flooded with death threats for drawings in support of the French magazine, he added. “When the government shows us as targets, threats begin to come,” he said. “They are waging an all-out war, with Erdogan [attacking] from one side and the [pro-government] media from the other. Character assassination campaigns are constantly underway. We’ve come to fear even for our children’s lives.”

Leman's Aknar pointed also to organized smear campaigns on social media led by pro-AKP trolls who use “threats, swearing and constant provocation.” Asked about security precautions, he said, “We asked the police to assign officers to protect our building, but they said that was not necessary. They gave us a number to call if anything suspicious happens.”