International support for persecuted cartoonists in Turkey challenges the Justice and Development Party's doctrine that President Recep Tayyip Erdogan is above all criticism. 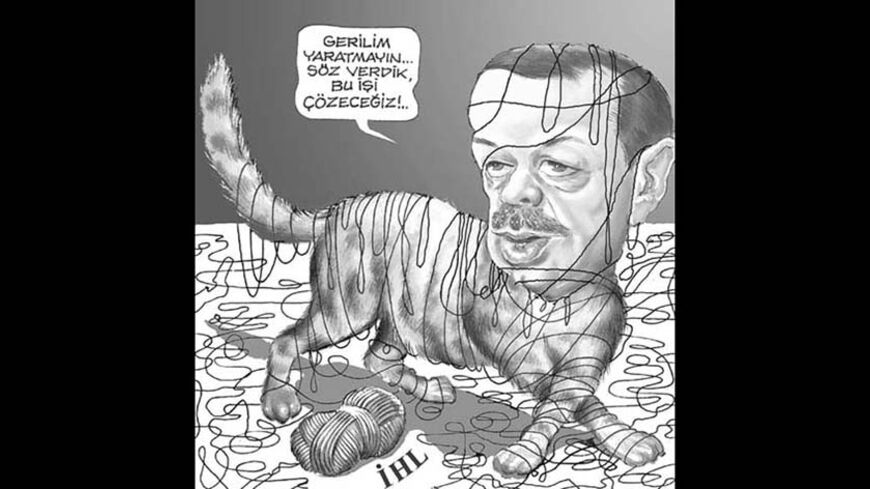 A cartoon by Musa Kart shows then-Turkish Prime Minister Recep Tayyip Erdogan as a cat tangled in strings symbolizing religious schools in Turkey. The text reads, “No need for tension . . . We promised, we will untangle this mess." The cartoon sparked a lawsuit after its publication by Cumhuriyet Daily on May 9, 2004. - Musa Kart

It was deja vu for Musa Kart, a prominent Turkish cartoonist, when he learned that Turkish President Recep Tayyip Erdogan had sued him — again. Kart’s newspaper, the left-leaning Cumhuriyet Daily, reported the news with the succinct headline: “He [Erdogan] did not forget the cat cartoon; now he is taking this cartoon to court.”

On May 9, 2004, Cumhuriyet Daily had published a Kart image that portrayed Erdogan, then prime minister, as a cat tangled up in a mess of strings, symbolizing “imam hatip” (religious schools). The Erdogan cat says, “No need for tension … We promised, we will untangle this mess.” Kart was acquitted after a lengthy process of trials and appeals. He gained added international attention in 2005, when he received the Courage in Cartooning Award.

The second court case was brought because of a Kart cartoon Cumhuriyet published on Feb. 1, 2014. This image referenced the corruption probe that became public in December 2013 and portrayed Erdogan as a virtual guard watching over two thieves. One thief tells the other, “No worries, our guard is a hologram.” Erdogan based his claims on charges of “insult, breach of privacy and slander.”

Kart appeared in court Oct. 23 and was acquitted on all charges. Meanwhile, among the corruption probe's 209 suspects, not one was charged or tried in a court of law. Kart’s speech in his defense was forceful. He said, “I drew many caricatures during the corruption scandal, but not to insult anyone, just to portray the realities of the day. What we saw was injustice and lawlessness.” Kart continued, “I feel like we are in a cartoon now. I must say it is quite funny that while all charges against the corruption suspects have been dropped, I am the only one here sitting as the accused.”

Cartoon by Musa Kart published by Cumhuriyet, Feb. 1, 2014. The text reads “No worries, our guard is a hologram.” The cartoon refers to the corruption scandal that emerged in December 2013.

Despite Kart appearing as laid-back, his case was a serious matter, with prosecutors seeking to impose a 10-year prison sentence. Given the country's heated national agenda and the frequency of Erdogan’s personal lawsuits, not many in Turkey closely followed the Kart case. On Oct. 23, however, the author and cartoonist Martin Rowson started a Twitter campaign with the hashtag #ErdoganCaricature. He asked cartoonists and caricaturists worldwide to show solidarity with Kart and share a caricature of Erdogan on social media. Rowson’s call went viral.

Within a week’s time, hundreds of caricatures had poured in from around the world in a show of support for Kart. A number of amateur efforts of unique Erdogan cartoons were also submitted. Veteran cartoonists gave step-by-step instructions on social media on how to draw the Turkish president.

Al-Monitor contacted Kart, a humble, soft-spoken artist despite his national and international accomplishments. He said that Erdogan’s lawyers have decided to appeal his case. Thus, although Kart was acquitted, that decision might be reversed by a court of appeals.

The struggle of Turkish cartoonists had been featured in Western media via Al-Monitor before the corruption probe. Al-Monitor highlighted the salience of international collaboration among cartoonists, reporting on artists' depictions of Erdogan during the Gezi protests. While the Erdogan government went to extremes to try to shut down YouTube and limit access to Twitter, it could not do much against the subculture of political satire. In the Kart case, the #ErdoganCaricature campaign has been a morale booster for artists in Turkey as well as those opposing Erdogan. It is unclear, however, whether international solidarity among cartoonists can help those being prosecuted as they deal with actual legal charges, as Kart currently faces.

Cartoonists collaborate on a few close-knit international platforms, such as Cartooning for Peace and Cartoonists Rights Network International, and as artists they face potential danger for the work they produce. Almost all the Turkish cartoonists with whom Al-Monitor spoke over the course of 2013 said they do not desire fame.

One prominent cartoonist who asked to remain anonymous told Al-Monitor, “Look, this is a country where the Penguen building was torched in 2012. We all have families. We have to be careful.” The Penguen is a popular humor magazine known for its bold criticism. The middle-aged artist pointed out that the government had sued a Penguen cartoonist in 2011, and in this particular case, support by the Dutch politician Barry Madlener for the cartoonist's freedom of expression backfired, helping create a backlash against the artist. Egemen Bagis, Turkey's former European Union minister, reacted harshly when the case became major news in Turkey.

The cartoonist also told Al-Monitor, “We express our thoughts through our drawings. Most of us are not interested in being in the spotlight through physical identity.” Indeed, Al-Monitor research in November 2013 confirmed that many young cartoonists would rather share their work anonymously or under pseudonyms.

Unlike Turkey's mainstream media, which has steadily been taken over by businessmen who support Erdogan's Justice and Development Party (AKP), Turkish humor magazines are small and independent. To a certain extent, they have avoided being co-opted. This, however, does not mean that they are immune to government pressure. There was a time when Istanbul ferries deliberately did not sell certain humor magazines.

Heavy legal fines have led to financial struggles and bankruptcy for some of these independent publications. Since they are relatively small, however, their cartoonists simply move to another magazine or establish a new one. The subculture remains strong for finding means of resistance.

The AKP’s effort to generate its own cadre of cartoonists has failed. Salih Memecan, a prominent cartoonist working for the pro-AKP daily Sabah, has had a difficult time presenting political satire that is not offensive to the public. The latest scandal involving him stemmed from a cartoon depicting the 18 miners who were trapped in a coal mine in the town of Ermenek after a flooding accident. The cartoon showed rescue workers wading through knee-high water with tears bursting from their eyes. The leader of the group says, “Guys, you are making our business more difficult.”

Memecan’s cartoons have taken heat from the public for being “heartless” in their efforts to portray the government in a positive light. Al-Monitor asked several pro-AKP pundits their opinion about the cartoon, and none was willing to back Memecan. In this instance, Memecan did not even find support among the AKP’s Twitter troll army. One high-level bureaucrat told Al-Monitor, “It is just bad taste … during such a horrible tragedy.”

Critics of the AKP were much more candid in their comments. One journalist tweeted, “To make a mockery of such a disaster. You have lost your humanity, Salih Memecan.” The outspoken cartoonist Koral Erat tweeted, “You are a disgrace Memecan!” Turkish conservatives have had a challenging time in the department of fun and funny. They cannot produce products along the lines of or better than the other segments of society, and at the same time, they cannot control productions from the age-old art form of drawing or their distribution.

Izel Rosental, a Jewish Turkish seasoned satirist, told Al-Monitor. “One of the Ottoman sultans, Sultan Abdulhamid, banned caricatures for 32 years, which made him the most caricatured figure of his time in Europe. His nose especially became a center of attention.” Reviewing the Erdogan caricatures submitted from around the world, one cannot help but wonder whether Erdogan has internalized Ottomanism more than most have assumed.