No release for jailed journalists in Turkey’s Cumhuriyet case

During the latest hearing in a state lawsuit against journalists from Turkey's Cumhuriyet newspaper, the court has upheld its decision to keep the defendants in jail until the next hearing. 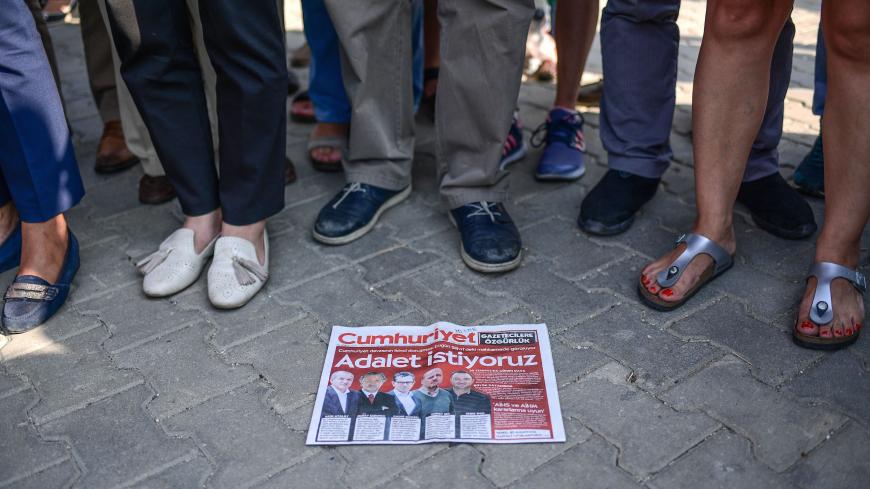 Demonstrators stand around a copy of the daily Cumhuriyet newspaper during a rally in the Silivri district of Istanbul, Sept. 11, 2017. The controversial trial of staff from Turkey's main opposition daily is seen as a test for press freedom under President Recep Tayyip Erdogan. - GETTY/Ozan Kose

The sixth hearing in Turkey’s so-called Cumhuriyet lawsuit took place at the courthouse in the Silivri maximum security penitentiary outside Istanbul Sept. 11. The defendants — 17 managers, reporters and writers — from Cumhuriyet, the country’s largest secular daily newspaper, are accused of membership in a terrorist organization. Even though many secular Turks hoped that the six defendants who have remained in detention since Oct. 31, 2016, would be released, the court decided to keep them in jail until the next session on Sept. 25.

The left-leaning news website Diken announced the decision with the headline, “Cruelty Continues.”

The terrorism charges against the “Cumhuriyet group” are hard to believe. The terrorist group these secular newspapermen are accused of working for is none other than the network of the Pennsylvania-based religious preacher Fethullah Gulen. Turks from across the political spectrum derogatively refer to Gulen’s followers as “FETO” (Fethullah Gulen Terror Organization) and many believe that Gulen masterminded last year’s attempted coup.

The case is doubly curious because the three most prominent defendants in the case — columnist Kadri Gursel (who is also an Al-Monitor columnist), cartoonist Musa Kart (who is best known for drawing Turkish President Recep Tayyip Erdogan as a cat) and veteran reporter Ahmet Sik — are hardly FETO material.

For years, Gursel warned that Gulenists in the Turkish state constituted a separate “organization” and threatened national security. Journalists such as Huseyin Gulerce, who used to refute Gursel’s claims, have since switched sides and are now decrying Gulen’s pernicious influence in Turkey. During his Sept. 11 defense, Gursel reiterated how he had tried to warn members of Erdogan’s ruling Justice and Development Party (AKP) about FETO, but was now in jail for allegedly being a FETO member.

Kart, for his part, used his political cartoons to parody the about-face that many members of the AKP undertook after the coup attempt. In a telling cartoon on Aug. 3, 2016, Kart showed Gulen recanting his membership in FETO and how he realized it was a terror organization. In a tone reminiscent of Erdogan’s apologetic tone after the coup attempt, Kart has Gulen say, “May God forgive us.”

But of all the defenders in the Cumhuriyet case, Sik is probably the most famous opponent of Gulen. He was jailed in 2011 by Gulen-affiliated prosecutors for writing a book titled “The Imam’s Army,” which looked at how FETO had infiltrated Turkey’s national police department and had used it to strong-arm the secular opposition in the country.

Indeed, it seems there was a lot of hope in the courtroom that the jailed six would be released at the end of the day. A political activist, who wished to remain anonymous because the public prosecutors have several cases against him, told Al-Monitor, “The families of the defendants were very hopeful that their loved ones would be released. The lawyers were excellent. But a key witness, Mehmet Farac, did not come to the court to testify, which prevented the case from moving forward and from the defendants having a chance to respond to the accusations. Meanwhile, international observers had trouble coming into the courtroom because the gendarmeries took their phones. All of this had the feeling of an ‘operation’ that the state was setting up Cumhuriyet newspaper.”

In addition, the activist said, several people, led by the head of the local branch of the AKP, verbally assaulted those who came to support the defendants. Members of parliament, including the vice chairman of the Republican People's Party, Sezgin Tanrikulu, "also received their share of insults." In addition, some of the defendants’ supporters criticized AKP deputy Mehmet Metiner, who was also at the courtroom.

The activist said someone else at the courtroom with good connections in Ankara told him before the hearings that “there would be no acquittals or releases and … the Cumhuriyet case will be combined with the [whole] FETO case in September.”

The Cumhuriyet case shows that, rather than unearthing FETO’s networks within the Turkish state, the state is using public fears to silence the last effective secular media outlet. The sad part is, it is making the AKP look bad as well. The most ironic part in the Cumhuriyet case is that, for years, FETO-affiliated members of the judiciary used the maximum security facilities at Silivri to try their opponents and convict them on bogus evidence — most notoriously in the Ergenekon and Sledgehammer cases. Sidelining those cadres allowed Gulenists to rise in the police and armed forces and then move against Erdogan in 2013 through compromising tapes and then in last year’s coup attempt.

It remains to be seen how Turkey will break free from this cycle of injustice emanating from Silivri.