As outraged observers look on, the trial of 17 journalists and managers of opposition newspaper Cumhuriyet began today, the anniversary of the end of Turkish press censorship in 1908. 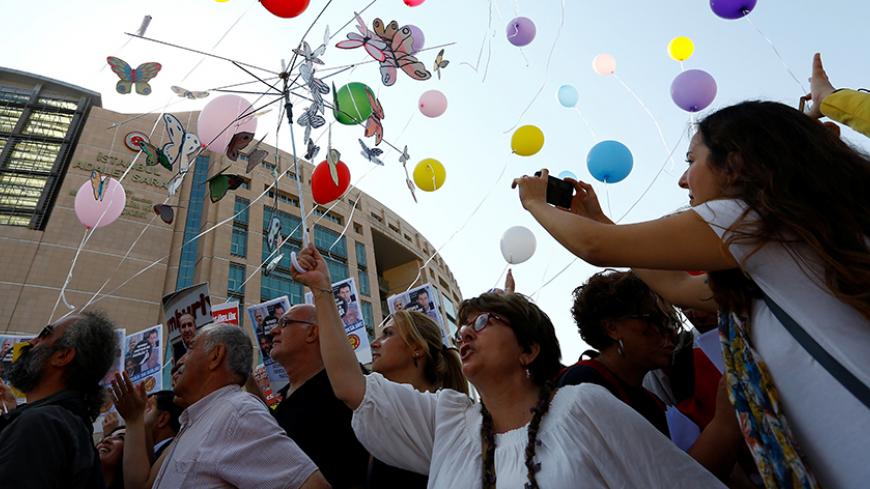 Journalists and press freedom activists release balloons during a demonstration in solidarity with the members of the opposition newspaper Cumhuriyet outside the courthouse in Istanbul, Turkey, July 24, 2017. - REUTERS/Murad Sezer

July 24 is the anniversary of the supposed lifting of press censorship in Turkey, an occasion that is marked by Turkish journalists as a day of celebration. It was therefore sadly ironic that the long awaited trial of 17 journalists and managers of Cumhuriyet, Turkey’s most respected opposition daily newspaper, started today. They face an outlandish range of thinly supported terror charges and each faces up to 43 years if convicted.

The “Cumhuriyet 17” include veteran columnist Kadri Gursel, who also writes for Al-Monitor; award-winning investigative reporter Ahmet Sik and cartoonist Musa Kart. Their plight is being watched closely by press watchdogs, lawmakers and fellow journalists from Turkey and beyond. The globally acclaimed French cartoonist Plantu was among those to lend support, sharing a biting image depicting President Recep Tayyip Erdogan’s suppression of the press via Twitter.

Many were at hand to witness the day’s proceedings, injecting an air of festivity and defiance with multicolored plastic balloons that they popped outside the Cagalayan courtroom in Istanbul.

“There were hundreds of people trying to get in to watch the case this morning and it turned into a shouting and pushing match that delayed the start,” said Al-Monitor contributor Ayla Jean Yackley. There were dramatic scenes as defendants’ loved ones strained to touch them. Howls of protest erupted when gendarmerie guards intervened to prevent Gursel’s 10-year-old only child, Erdem, from hugging him.

“Why this cruelty, why?” tweeted Umit Nazli Boyner, a prominent Turkish businesswoman. Impunity served up with dollops of cruelty has become something of a hallmark of Erdogan’s ruling Justice and Development Party after last year’s failed coup.

Since then, the Turkish authorities have cracked down on suspected coup plotters, most accused of links to Fethullah Gulen, the manipulative Pennsylvania-based Sunni cleric who the government insists masterminded it all. The Cumhuriyet journalists are among tens of thousands of Turkish citizens who have been caught up in the government’s dragnet.

At the last count at least 150,000 people had been sacked from government jobs and academia and 50,000 or more jailed over their alleged collusion. With over 150 journalists currently behind bars, Turkey remains the world’s biggest jailer of journalists. Yet in a recent interview with the BBC, Erdogan claimed only two of them were real journalists. The rest, he insisted in a recent public address, consist of murderers, fraudsters, thieves and child molesters.

The bulk of jailed media workers were employed by now shuttered Gulen-affiliated titles, a crime in and of itself regardless of what they reported or the opinions they aired. Victims who fall under this category include Sahin Alpay, a septuagenarian intellectual who is in ailing health, as well as the respected liberal economist Mehmet Altan. Their plight has attracted far less sympathy among Turkey’s urban secularists, partly because many believe that not only was Gulen mired in the coup but that he helped propel Erdogan to power in the first place. Many others have been imprisoned over their affiliation with pro-Kurdish outlets.

Gursel was the first to take the stand today and Erdogan might have had second thoughts, had he listened to his trenchant defense. “I am here before you today not because I knowingly and willingly assisted a terrorist organization but because I am an independent, probing and critical journalist,” Gursel said as he set about methodically deconstructing prosecutors’ claims that he was connected to Gulen.

Anyone familiar with Gursel’s work knows that he was as fiercely critical of the preacher and his octopus-like network as he is of Erdogan. Sik’s case seems doubly Orwellian because he was jailed in 2011 at the instigation of a Gulen-linked prosecutor over an unpublished book he had written called “The Imam’s Army,” which chronicled Gulenist penetration of the state.

The absurdity of the prosecution's case was further highlighted by the chairman of the newspaper's executive board. Akin Atalay, who is also being remanded in custody, noted that evidence proving his "culpability" included records of a 2011 bank transfer to a worker in payment of a floor polishing job. The worker's son had apparently dined at a restaurant whose owner was under investigation for financial crimes, hence Atalay is apparently guilty by association.

As of this writing, the hearing of the Cumhuriyet 17 was continuing as the defendants took turns offering their testimony. Meanwhile, the government’s apparent lack of self-awareness was embarrassingly on display today when Foreign Minister Mevlut Cavusoglu congratulated “all those journalists who work night and day to arrive at the truth” in a tweet.

His words prompted a sarcastic response from Cumhuriyet columnist Ozgur Mumcu, who tweeted back, “Support from the foreign minister to the Cumhuriyet managers and writers. Thank you, Mr. Minister.”