Prominent Turkish journalist Kadri Gursel has walked out of prison after 330 days, though the often ludicrous proceedings against him and 17 other Cumhuriyet journalists are far from over. 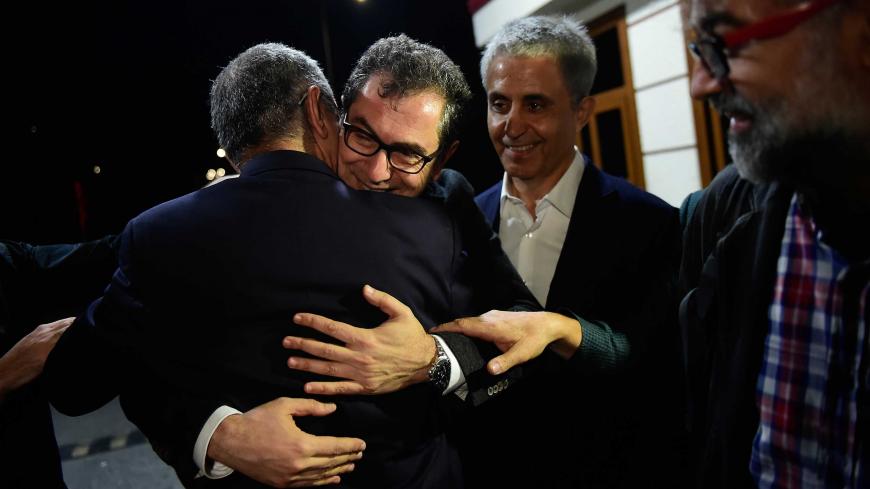 A Turkish court has freed veteran journalist Kadri Gursel, who spent almost a year in prison accused of terrorism links but five others remain behind bars in the latest hearing of a trial that human rights observers describe as a threat to journalism in the country.

Gursel, a Cumhuriyet columnist who also writes for Al-Monitor, said he was held for 330 days merely because he was a writer for the Turkish newspaper, one of the last domestic outlets critical of the government.

“There’s not much to celebrate or be happy about, because there are Cumhuriyet employees who are still being held unjustly, facing baseless accusations,” he told friends and family.

Gursel’s trial will continue with 17 journalists and employees of Cumhuriyet, one of Turkey’s oldest dailies, on charges they aided and abetted Fethullah Gulen, the US-based cleric said to be the mastermind behind the bungled coup against President Recep Tayyip Erdogan in July 2016, and other illegal groups. They face up to 43 years in prison if convicted.

Cumhuriyet was established by Mustafa Kemal Ataturk, the Turkish republic’s founder, in 1924, and is steeped in the secular principles of the modern republic. Its staff, including renowned investigative journalist Ahmet Sik, has spent years exposing the Gulen network’s infiltration of the police, armed forces and judiciary, as well as its erstwhile links with the ruling party.

Monday’s hearing, the third session since July, before a packed courtroom underscored the challenges the prosecution faces in proving the paper was part of a broad conspiracy and fueled claims that the case is motivated by political, not legal, concerns.

In testimony for the prosecution, witnesses accused Cumhuriyet of being part of a CIA plot that aimed to make its editorial tone more progressive and pro-Gulen, pointing to a photo of Gulen featured prominently on the paper’s front page, courtroom observers said.

In one dramatic exchange, Akin Atalay, a lawyer and Cumhuriyet’s imprisoned chairman, seemed to catch the witness at the heart of the prosecution’s case lying under oath about secretly petitioning Erdogan to intervene at the paper.

Other problematic evidence has included doctored front pages to make Cumhuriyet appear to support the coup attempt. The charges against Atalay are based in part on his payment to a contractor six years ago to redo the floors in his home; the contractor’s son later dined at a restaurant suspected of belonging to a Gulen follower. In the case’s most surreal twist, a prosecutor behind the indictment is now himself in jail awaiting trial for alleged Gulenist links.

At the latest hearing, Judge Abdurrahman Orkun Dag acknowledged, “There are problems in the indictment.”

Outside the courthouses, tensions boiled over. Cumhuriyet supporters appeared to push and slap a pro-government TV reporter after he called the defendants “traitors” in a video posted on social media. Later, a pro-government newspaper tweeted that all the defendants would remain in custody while the judges are deliberating, prompting Dag to say he would file a complaint against the reporter.

The Organization for Security and Cooperation in Europe and the United Nation’s special rapporteur on freedom of expression have called on Turkey to drop the case, calling it a threat to journalism and journalists. The Committee to Protect Journalists describes Turkey as the world’s biggest jailer of journalists, with some 150 journalists behind bars.

The pressures on Cumhuriyet go far beyond this case.

Newsstands are wary of selling the daily, which also effectively faces an advertising embargo with companies unwilling to purchase ads for fear of retribution, longtime Cumhuriyet columnist Orhan Erinc said in July. Erinc, 81, is himself accused of belonging to an armed terrorist organization.

While most of the defendants have been freed, Sik, Atalay, editor-in-chief Murat Sabuncu, accountant Emre Iper and Ahmet Kemal Aydogdu, a schoolteacher with no obvious connection to Cumhuriyet, will remain in prison at least until the next hearing on Oct. 31.

Sik, who has worked as a journalist for nearly three decades, was jailed for a year in 2011 after penning a book that explored the Gulen movement’s influence in the police force.

That case is still being heard by another court, even though almost all of the judges and prosecutors involved in the initial trial are in prison or fugitives for their alleged roles in the Gulen network. Meanwhile, at least five new court cases have been brought against Sik since he was rearrested in December, his wife, Yonca Verdioglu, told Al-Monitor at the start of the trial.

“The case against Ahmet perfectly shows the absurdity in Turkey — that there is no rule of law,” she said. “Ahmet will continue to face these attacks, but I could never ask him to quit journalism. He was arrested for asking the right questions, for shining a light on the truth.”