Six former employees of Cumhuriyet newspaper, including three journalists, returned to prison after a court rejected their appeal of terrorism convictions last year. 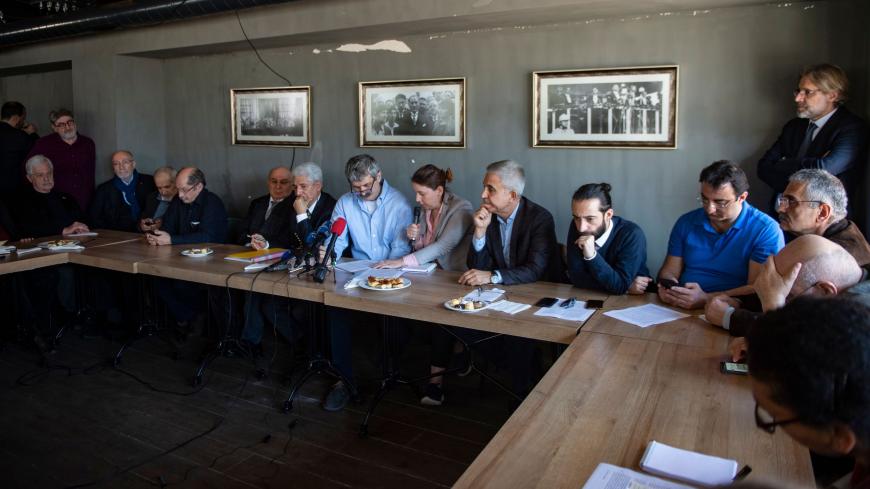 Six former employees of one of Turkey’s oldest newspapers were sent back to prison on Thursday after a court upheld their convictions on terrorism-related charges in a high-profile case international rights defenders have slammed as a blatant attack on press freedom.

The group, which includes journalists, lawyers, a board member and an accountant who worked for Cumhuriyet newspaper, were all sentenced to prison terms of fewer than five years exactly one year ago, and had been free pending their appeal. A district appeals court last week rejected their petition and ordered the men to return to prison.

Columnists Guray Oz and Hakan Kara and award-winning political cartoonist Musa Kart were among those who entered prison in the northwest town of Kocaeli on Thursday. Kadri Gursel, an Al-Monitor columnist, and lawyer Bulent Utku have yet to receive their summons but could face re-arrest in the coming days, a source close to the matter said. All of the men are among the 18 people who were convicted after a court ruled that Cumhuriyet’s coverage had aided terrorist groups.

“Reporters Without Borders sees imprisoning these journalists again as a transgression of the rule of law and a cruel implementation that clearly harbors political retribution,” Erol Onderoglu, the watchdog’s representative in Turkey, told Al-Monitor.

The defendants have since left Cumhuriyet after a witness who testified against them won his legal battle to retake control of the newspaper late last year. Its editorial tone has shifted from left-leaning to more nationalist since the change in management.

“The current management of the newspaper bears responsibility for the situation we find ourselves in,” Kart told a news conference on Monday. “But all of the media in Turkey is utterly manipulated by the government. Despite our case being an egregious violation of the law, we have not seen the solidarity this case merits from the press.”

In a bitter twist of Turkish criminal law, those ordered back to prison did not have the right to appeal to a higher court because their sentences amounted to less than five years. Six more defendants, including investigative reporter Ahmet Sik, who is now an opposition lawmaker, received longer jail terms for the same crimes in the same trial. Those harsher sentences allow them to appeal, and they remain free pending a ruling.

Should Sik and the others win their appeal, those jailed today will also benefit. If the appeal fails, Kart and the others will spend about a year in prison due to time already served during their lengthy pre-trial detentions, said Al-Monitor's source.

The opposition-minded Cumhuriyet was one of Turkey’s last newspapers to report on corruption and other wrongdoings allegedly committed by state officials before prosecutors targeted the outlet, accusing it of links with a religious network led by Muslim cleric Fethullah Gulen, whom Turkey blames for a failed 2016 military coup that killed more than 250 people.

Gulen, who resides in Pennsylvania, denies orchestrating the abortive putsch, but tens of thousands of his suspected followers are in prison on coup-plotting charges. The government classifies the sect as a terrorist organization, dubbing the network FETO.

Mustafa Kemal Gungor, a lawyer who was among those who returned to prison, said at the news conference that the staunchly secular Cumhuriyet newspaper spent the last four decades warning of the perils posed by the influential Gulen network, which was close to President Recep Tayyip Erdogan’s party until Gulen turned on him in 2013.

“This case is aimed at intimidating the rest of the press and all other opposition circles in society. They are spreading fear throughout society so that no one will speak or write or criticize,” Gungor said. “One cannot help but think of Orwell’s ‘1984.’”

Indeed, the trial, which began in 2017, often bordered on the surreal. The prosecutor who first brought the case was himself later indicted for membership in FETO. Among the dubious evidence presented in court were doctored headlines to make Cumhuriyet appear sympathetic toward the coup and calls to book a reservation with a popular tour operator that was later linked to the Gulen network. The owner of that company is now Turkey’s tourism minister.

The defendants were also accused of aiding two militant groups, the armed Kurdistan Workers Party and the far-left Revolutionary People's Liberation Party/Front, for their news stories covering the organizations.

Today, the government or businesses close to it control 90% of Turkish media outlets, according to Reporters Without Borders. The Paris-based advocacy group ranked Turkey 157th out of 180 countries in its World Press Freedom Index this month, citing the country’s broad erosion of the rule of law since the coup attempt that has crippled independent media.

The Cumhuriyet trial drew condemnation from international rights defenders including PEN International, which said the trial was not fair, and the EU, which questioned whether membership candidate country Turkey falls short of its democratic standards.

But the European Court of Human Rights in Strasbourg, France, has failed to take up the defendants’ applications more than two years after they were lodged.

On Thursday, the defendants were accompanied by their spouses, lawyers and former Cumhuriyet editor-in-chief Murat Sabuncu as they quietly waited in line to enter prison, a video shared with members of the press showed.

“We are going back to prison, holding our heads up high,” said Kart at the news conference. In the video, he turns to wave to the camera. “Stay well,” he says before entering the penitentiary.