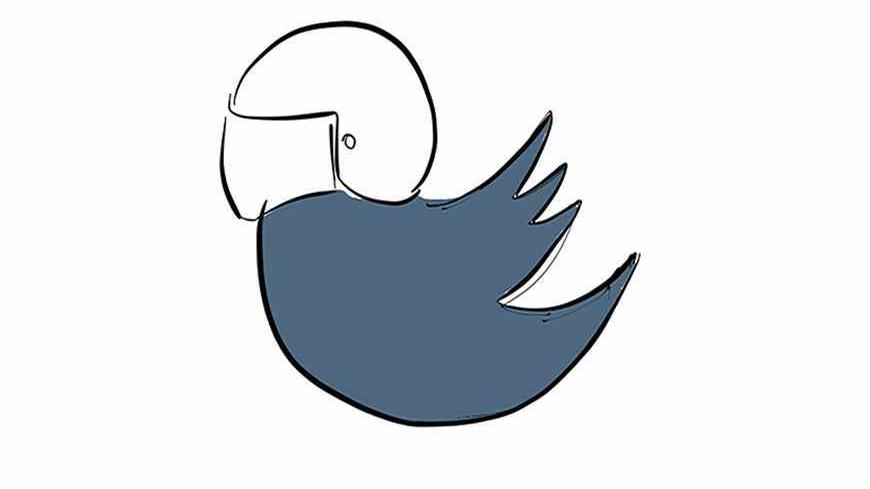 This image by Turkish political cartoonist Koral Erat mocks the police pressure on Twitter after the Gezi movement. - Koral Erat

If you have been following the Turkey Pulse of Al-Monitor you must know that Turkey’s ruling party Justice and Development Party (AKP) should be applauded for its resistance to any and every form of political opposition. One must give credit where credit is due, and Turkish Prime Minister Recep Tayyip Erdogan and his crew deserve kudos for competing in every field, from fashion to media, with the "establishment," the "secular," "white Turks," whomever you would like to name — that is, anyone who is not an AKP partisan.

There is, however, one field they have yet to conquer: Satire. AKP cannot compete with political cartoons. Indeed, my 10-year-old son brought this fact to my attention by saying, "Who are the pro-AKP caricaturists?" There was only one name that came to my mind: Salih Memecan, whose wife is a longtime MP from AKP. Considering that I might be biased, I asked a close friend, who is an official member of AKP, to do a survey. She reviewed humor magazines on sale for November and came back saying, "It is disgraceful. These are all Islamophobic AKP-haters."

Surely, many Turkish artists are pro-AKP as Nagehan Alci has highlighted in her piece, where her focus was on an openly gay artist who was delighted to see hijabi Turks befriending members of the LGBT community. Alci’s piece encouraged me to expand my field research for diverse caricaturists. I failed to find an Erdogan-admiring gay cartoonist. My findings point to a bleak picture. I write to be proven wrong.

Political cartoons as a form of graphic protest still have an effect on the body politics of Turkey. Even those who may not understand Turkish can see the message in a caricature. Cartoons make us not only smile, but promptly locate the undeniable truth in our minds. Erdogan is aware of this power, hence there is a Wikipedia entry in Turkish, "Cartoons sued by Erdogan."

In the last month, I have had the opportunity to communicate with quite a few Turkish cartoonists; most of them asked me to keep their names confidential. While respecting their request, I have to explain that what we spoke about does not entail any "classified" information concerning national security. None of these artists were interested in acquiring political power or toppling the government with their pens. Yet, as cartoonist told Al-Monitor, "One cartoon can turn you into a 'terrorist,' a member of an ambiguous illegal organization you may have never heard of before. It is a luxury to be an artist in Turkey, because you really cannot earn a living by providing deft criticism against the government."

A distinguished cartoonist who was involved in the Gezi protest told Al-Monitor, "We never felt free. We always expect to see cops at our door, not sure what to tell them. Why? We constantly receive threats."

Korel Erat, a young cartoonist and designer, told Al-Monitor, "If you look at political cartoons in the mainstream publications, you will observe they are rather shallow and lack an edge. This is mostly due to self-censorship of the artists or the editors." My friend from AKP concurred with Erat’s statement about the quality of political satire, but not about the causes. Erat shared some of his drawings with Al-Monitor. He has an unmistakable clarity and intensity which eliminates the need for words. His subtle criticism of the current situation is poignant.

One editor of a distinguished humor magazine told Al-Monitor, "We have lengthy talks with attorneys before we finalize any publication. We want to make a point without ending up with a court case, which is difficult because caricature on its own means sarcasm; it is counter-art." Metin Ustundag, one of the most popular cartoonists of Turkey, published in Penguen magazine's Gezi special edition, referring to the Snow White mirror quotation, "Media, media, scared media: Tell me are you the most scared media in the world?" The gist of the Gezi struggle was succinctly summarized in Ustundag’s catchy aphorism, "Alcohol intoxication will soon pass, but political power intoxication passes only through deep holes."

Another cartoonist was willing to share her name until an outspoken actor, Baris Atay, was detained for his alleged connection to RedHack on Nov. 21. She told Al- Monitor she shares her most critical drawings without a signature through anonymous posts on twitter and Facebook, also on several friends’ blogs. During our Skype conversation she turned on her iPhone to show me several critical drawings of the ruling party elite. She smiled while saying, "These are the underground cartoons; they are jailed in our phones." She highlighted a factor which had escaped my attention, that cartoons of opposition leaders are bolder. For example, main opposition leader, Kemal Kilicdaroglu of CHP (Republican Peoples Party) is drawn with less frequency than Erdogan but portrayed in a harsher tone. Kilicdaroglu, who is known for his tolerance, has not sued cartoonists or threatened any artists in the public domain.

Serdal Kesgin, a painter working on how the Gezi movement reflected upon consumerism and city life, told Al-Monitor that an art gallery was sued because a painting on display was seen as "offensive to Erdogan." Kesgin explained, "I do not censor myself but the gallery or the viewer may seek to censor my works." Another cartoonist, a world traveler, told Al-Monitor that Erdogan cartoons in the international media during Gezi were much more sophisticated than Turkish ones. He explained that many Turkish artists were in touch with cartoonists in other countries, so much so that they inspired each other. Oddly, international drawings of Erdogan have found a good following amongst Turkish audiences and many young people share those cartoons on social media.

Another trend that has been popular amongst young Turks is satire produced by artists who do not have signatures. They are simply collages of photographs with embedded political criticism. Bobiler group has been one of the pioneers of this trend. Several similar websites like listelist are increasingly popular amongst youth. You can view an impressive version of this trend on Twitter by checking out the tweets from the @akpglobal account. They elegantly mock AKP’s most precious bragging rights. For example, when Erdogan visited Angry Birds Headquarters in Finland in early November, the account tweeted, "Angry Birds Now Smiling: Through our animal-loving social policies, Scandinavia's depressed birds are happy."

It is difficult to produce art in intense political times. In the age of instant gratification, when graffiti of Gezi or Tahrir movements have all been painted "clean" by authorities, political cartoons adopt to the political challenges with the help of technology. "Jailed cartoons" of the iPhone generation travel all around the world generating bitter questions and smiles of the masses. Yet, satire still remains the one aspect of art where authoritarian regimes have failed to dominate; AKP is no exception.