A gallery in Cairo is exhibiting 220 cartoons that illustrate what has made Egyptians laugh over the past 100 or so years. 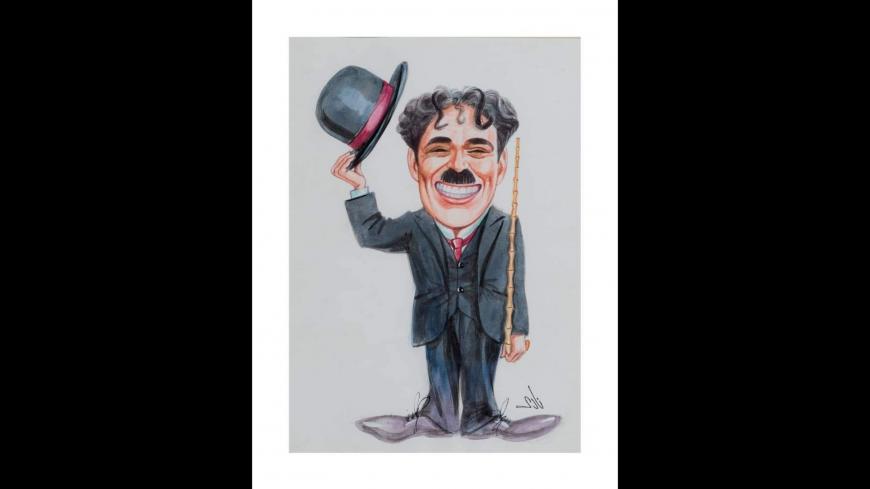 A caricature of Charlie Chaplin by Mohammed Nadii is part of "Caricature," an exhibition at the Ubuntu Art Gallery, Cairo. -

A smiling portrait of Charlie Chaplin, a satirical drawing of the Ottoman Empire leaving the Middle East to the Europeans and a cartoon featuring King Fouad (r. 1922-36) occupy the walls of the Ubuntu Art Gallery in Cairo, a snippet of the array of topics covered by Egyptian cartoonists over more than a century. Ubuntu has chosen to end the decade on a funny note with “Caricature,” an exhibition of 220 cartoons by 78 Egyptian artists.

“I wanted to celebrate Egyptian caricature at a time when cartoonists are having a hard time finding jobs,” said Samir Abdelghany, who curated the exhibit and is a cartoonist himself.

Abdelgahny told Al-Monitor that he had wanted to pay homage to the cartoonists who operate along a thin line, both economically and politically. Few can find jobs outside daily newspapers, and even fewer are lucky enough to escape censorship by the state or by their own media outlets. “All of the contemporary cartoonists in this exhibition agree on one thing: We are battling for survival,” Abdelgahny said.

The framed sketches hanging on the walls of the two-story gallery bring together works by younger generations of cartoonists and those produced by their forebearers, who mocked the Ottoman Empire and subsequent colonizers more than a century ago.

For example, the exhibition pays homage to the pioneering role of Yaqub Sanu, an Egyptian Italian Jewish journalist who in the 1870s founded “Abou Naddara” (Man with the Eyeglasses), the first satirical magazine in Egypt.

The four-page Abou Naddara, published weekly in Arabic, used cartoons and satirical prose to mock the extravagance of Khedive Ismail (r. 1863-79) and his desperate attempts to fund his infrastructure and military projects by courting European powers. Ismail was not amused by Sanu's efforts and consequently exiled him to France. Undeterred, the sharp-tongued critic continued to publish his satirical organ abroad.

Ismail’s successor Tawfiq (r. 1879-92) also served as the butt of many a joke. Egyptian humor, though often underground, became a sharp tool of criticism against the British Mandate over Egypt. In 1881, the journalist and poet Abdallah al-Nadim launched a new paper, “al-Tankit wa al-Tabkit” (Joking and Weeping). Nadim was also known for being a spokesman for the Urabi Revolt, the nationalist uprising during 1879-82 with the goal of ending British and French influence over Egypt.

The exhibition catalog references two non-Muslim caricature artists from the late 19th and early 20th centuries. One of them, Juan Santes, was a prolific Spanish cartoonist who drew the front-page cartoon for several publications in Alexandria and Cairo and contributed regularly to “L’Egypte Nouvelle,” the modernist weekly published from 1922 to 1941. Critical of the government, Santes was known for his sharp sense of humor, and rumor had it that even King Fouad, whom Santes often mocked, couldn't resist laughing at his cartoons.

The other non-Muslim was the Armenian Egyptian Alexander Saroukhan (1898-1977), who, fearing persecution of Armenians by the Turks, had fled to Egypt in the 1920s. Saroukhan worked for Rose el-Youssef, the Akher Sa'a magazines and the newspaper Akhbar al-Youm.

The weakening of Ottoman rule and the ensuing transition from it in the early 20th century were gifts to satirists. A 1920 caricature by Abdel Hamid Zaki shows an Ottoman soldier playing the violin as Turkish women dance around him. Nearby, women representing Algeria, Egypt, India, Sudan and Tunisia sit passively with their hands tied to trees. Abdelghany interprets it as a reference to Ottoman policies having rendered these countries helpless against their colonization by European powers.

“The caricatures of the pioneers played a major role in confronting colonialism,” the artist and critic Sami al-Balshi told Al-Monitor. “This exhibit gives the audience a rare chance to get acquainted with the pioneers of political cartoons,… who were both humorous and authentic.”

The problems that have dogged Egypt for decades — such as its economic woes, unemployment, and corruption – are all present in the Ubuntu exhibition, as are sexual innuendo and marital infidelity.

A caricature by Saeed Badawi showing a dog leading her owner to the owner’s husband and finding him embracing the maid is a favorite of Aya Essam, a photographer who toured the exhibit. “It shows that dogs are always loyal,… but husbands might not be,” she chuckled before snapping a photo of the piece.

“We cannot live without cartoons,” Essam further remarked. “They give us positive energy to continue. I hope to find more and more exhibitions of this kind, not just for tracking their history but also bringing a smile to our faces.”

Ahmed Fouad, a secondary school student, told Al-Monitor that the exhibition provided him with an introduction to cartoons and made him aware of them as an art in addition to being a way of showing how societies change, or remain consistent, in terms of what makes them laugh.

“It is really documenting Egypt,” Fouad said. “Most of these works have messages far beyond laughing.”