Erdogan goes on offense against European leaders in defense of lslam

Turkish President Recep Tayyip Erdogan has taken up the cause of Islam in the West, further damaging Turkey's ties with Europe. 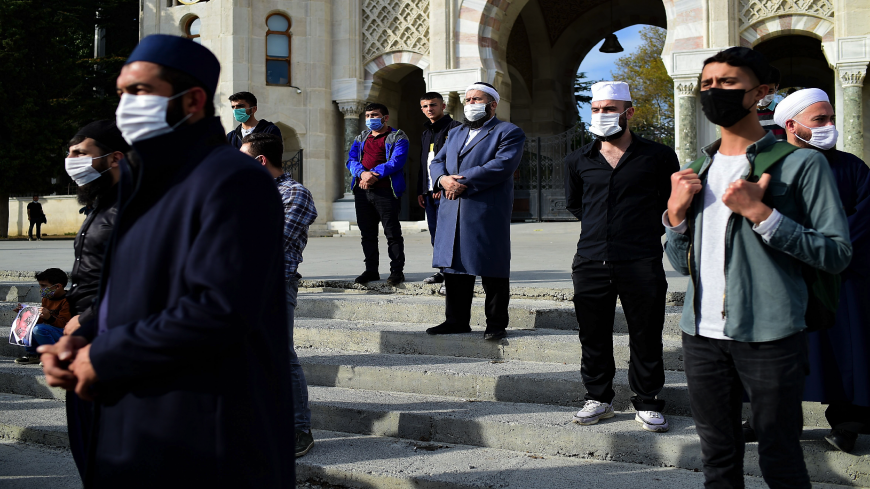 Men look on during a demonstration against French President Emmanuel Macron's comments over Prophet Muhammad cartoons, in Istanbul, on Oct. 25, 2020. Turkish President Recep Tayyip Erdogan on Oct. 25, 2020, renewed his call for Macron to undergo mental checks, a day after his comments prompted Paris to recall its envoy to Ankara. Macron's comments, on Oct. 21, 2020, came in response to the beheading of a teacher, Samuel Paty, outside his school in a suburb outside Paris earlier this month, after he had shown cartoons of the Prophet Muhammad during a class he was leading on free speech. - YASIN AKGUL/AFP via Getty Images

Along with other businesses, Mevlana Mosque in Berlin was searched by police on Oct. 21 during dawn prayers. The mosque — a well-known establishment in the heart of Berlin’s Kreuzberg district — belongs to the Turkish-Islamist Milli Gorus (National View) movement, which is a member of the Islamist Federation and affiliated with the AKP. The reason for the search was the allegation that the mosque and other businesses are involved in fraud, including illegally receiving 70,000 Euros (about $83,000) from the German government for COVID-19 emergency aid. This aid is reserved for businesses that have suffered financial losses due to the pandemic.

In angry outbursts, AKP officials say there was no justification for police to enter the mosque. For example, Diyanet (the Religious Affairs Directorate) condemned the search both from its official website and the director’s Twitter account. Diyanet’s director, Ali Erbas, tweeted that “this kind of discriminatory and disrespectful behavior against Muslims cannot be accepted for any reason.”

On Oct. 23, Erdogan reacted first on Twitter, posting a series of tweets strongly condemning the police raid at Mevlana Mosque. Erdogan claimed the raid was “obviously nourished by racism and Islamophobia, totally flouting freedom of belief, and bringing Europe closer to the darkness of the Middle Ages.” Erdogan and his close associates took on social media, portraying the mosque search as an Islamophobic and racist move and a direct attack against freedoms. Their social media and television appearances loudly demanded “respect for Muslim sensitivities and holy values.”

Yet respect for religious beliefs and observation is not a guaranteed right in Turkey — not even for Muslims. For example, in 2012, Kurdish Muslims holding a prayer session in Yuksekova were subjected to police brutality. Police used water cannons and tear gas on civilians during Friday prayers. Another example of Turkey’s disrespect for religious freedoms would be regular police raids of Alevi communities' prayer houses and the government’s audacity not to recognize these gathering sites as religious institutions. The AKP’s legacy in erasing Turkey’s Christian past needs scrutiny as well.

Erdogan’s yearning to protect Muslims in the West is not limited to Germany. After the brutal murder of middle school teacher Samuel Paty in Paris on Oct. 16, the French government initiated a serious crackdown on extremist organizations. The attack on Paty happened a few days after he had shared cartoons of Prophet Muhammad in his class while explaining the respect for freedom of speech.

Erdogan’s relations with French President Emmanuel Macron have been strained over the last couple of years due to NATO and Mediterranean security. Macron has criticized Ankara’s operations in Syria and warned Turkey that it can’t expect NATO support if it continues without consultation with the rest of the alliance. In regards to the Eastern Mediterranean, France has been locked in a conflict with Ankara over gas reserves and maritime boundaries, supporting allies Greece and Cyprus in their dispute with Turkey. It would not be an exaggeration to say Macron has become Erdogan’s favorite Western punching bag.

Since the teacher’s murder, Erdogan has focused on Macron’s measures against extremism, referring to them as Islamophobic. As French security forces raided Islamist networks and arrested prominent figures of these establishments, pro-AKP media was unhappy. TRT World published a searing piece criticizing police actions against nongovernmental organization BarakaCity’s president, Idris Sihamedi, and his family.

It is quite peculiar to see pro-AKP outlets publishing in English in defense of Salafi-affiliated BarakaCity. Al-Monitor asked a Turkish banker working in Paris about the newfound affection of the Turkish press for these NGOs. Speaking on the condition of anonymity, the banker said, “BarakaCity, just like Milli Gorus mosques in Germany, collects money through zakat (annual donations of Muslims). They have charities operating in Gaza. My best guess would be some sort of intertwined money relationship among these groups. We see lines blur between the Muslim Brotherhood and Salafi groups when it comes to financial matters.”

Erdogan’s anger toward the West in general and toward Macron specifically snowballed on Oct. 25 when he added the leader of Dutch right-wing Party for Freedom Geert Wilders to his list. On Oct. 24, Wilders had pinned an Erdogan cartoon on his Twitter timeline with one word: “terrorist.” Wilders provided a great opportunity for all of Erdogan’s men to emerge on different platforms and spout their harshest words, such as Foreign Minister Mevlut Cavusoglu calling Europeans “racist losers." Erdogan was calmer toward Wilders, as he only told Wilders to know his limits and added “unlike him, we do not condone racism; fascists have no place in Turkey.”

Macron has decided to honor the beheaded teacher, saying “We will not give up cartoons.” Macron’s decision to display the Muhammad cartoons on the walls of government buildings was simply unacceptable for Ankara. Erdogan labeled it Islamophobia, meaning hatred toward Turks, because "for the Westerners, Muslims are Turks, and in the same way, Turks are Muslims.” Erdogan questioned multiple times why Macron is troubled with Islam before he suggested that Macron needs a mental health check and will be losing his seat in next year's election.

France recalled its ambassador from Ankara and shared its concerns about the rudeness of Erdogan’s comments and the lack of condolences for slain Paty. Meanwhile, Turkey called for a boycott of French goods, while Syrians in different parts of Turkey abruptly started protesting against Macron.

Erdogan feverishly speaks of freedoms for Muslims in the West. Yet he had spoken out about the Charlie Hebdo cartoons within days of the attack, saying “freedom is not limitless.” And a handful of brave Turkish columnists were prosecuted for sharing Charlie Hebdo’s cartoons to commemorate the slain cartoonists.

Despite all of Erdogan's words, the most concerning commentary was in English from Erdogan’s director of communications, Fahrettin Altun. Altun assumed the role of spokesperson and protector for European Muslims, reinforcing their convictions that the West despises Islam, while also threatening Europeans that “Muslims won’t go away because you don’t want us. We will not turn the other cheek when you insult us. We will defend ourselves and our own at all costs.” Ankara does not seem to care that dividing Europeans as Muslims and others will not do either of those groups any good. Indeed, it will feed more ammunition into the hands of extremists — be it white supremacists or Islamists. If secularism in Turkey is on life support, secularism in Europe is likely to be further challenged.