After three people were killed by a suspected Islamist extremist in France’s coastal city of Nice, Turkey's president took a break from his row with Paris to condemn the violence. 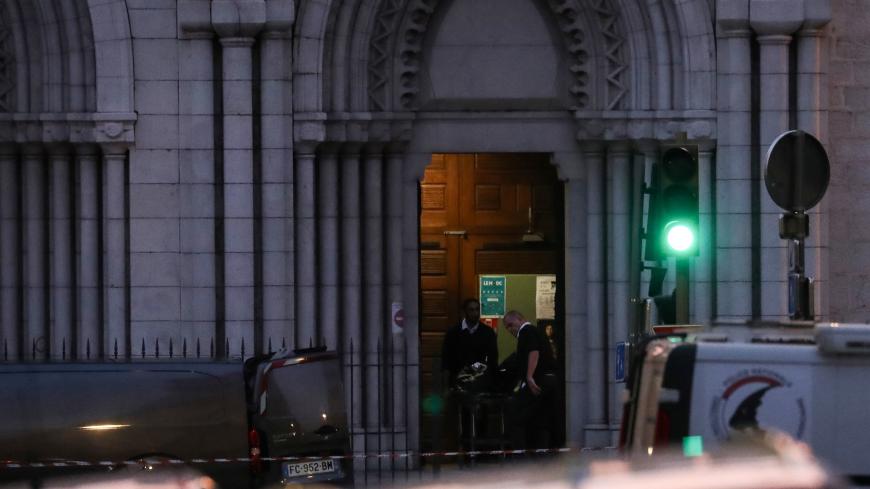 French coroners carry the body of one of three people killed at the Notre-Dame de l'Assomption Basilica in Nice, southern France, on Oct. 29, 2020, after a knife-wielding man slit the throat of at least one of the victims, in what officials are treating as the latest jihadist attack to rock the country. - VALERY HACHE/AFP via Getty Images

Turkey swiftly joined the wave of condemnations over the brutal murders of three people by a suspected Islamist extremist in France’s coastal city of Nice today, in the midst of an escalating row between Ankara and Paris over a broad range of issues spanning the Eastern Mediterranean and the role of Islam.

The assailant is said to have charged at the victims with a knife in the Notre-Dame Basilica in the heart of city on the French Riviera, shouting "Allahu Akhbar." Two of the victims were female, one a 70-year old who was “virtually beheaded” as she was praying, the BBC reported. The suspect, who has not yet been identified, was shot and detained soon after.

France’s President Emmanuel Macron, who traveled to the scene of the carnage in Nice, called it an “Islamist terrorist attack.”

Turkey’s Foreign Ministry said in a statement, “It is clear that those who commit such a violent act in a holy place have no respect for any humanitarian, religious or moral values.”

Turkish presidential spokesman Ibrahim Kalin said, “Terror has no religion, language or color. We will fight with determination and solidarity against all forms of terrorism and extremism.”

Two other attacks took place Thursday, one near the French city of Avignon in which the perpetrator was shot dead and another outside the French Consulate in Jeddah, Saudi Arabia, in which a security guard was wounded.

Turkey’s rapid response to the killings, which French authorities are treating as a case of terrorism, stood in stark contrast to its equivocation over the Oct. 16 murder of French schoolteacher Samuel Paty. Paty was beheaded by an 18-year old ethnic Chechen man after showing his pupils controversial cartoons mocking the Prophet Muhammed published by the satirical magazine Charlie Hebdo.

Turkish prosecutors launched a legal probe into the magazine Wednesday after it published a provocative cover deriding Turkish President Recep Tayyip Erdogan, saying the depiction constituted libel and did not fall under free speech.

The famously thin-skinned Erdogan has been raging against the West in recent weeks over the treatment of Muslims in Europe, likening it to the horrors inflicted upon the Jews by the Nazis. Western countries mocking Islam, he said Wednesday, wanted to “relaunch the Crusades.”

But the bulk of his invective has been reserved for Macron. Erdogan said his French counterpart was in need of a “mental exam” because of his views on Islam, prompting the Quai D’Orsay to recall its ambassador to Paris for consultations.

Macron drew the ire of Muslims worldwide in an Oct. 2 speech in which he called Islam a “religion in crisis.” Turkey has led the chorus of protest and calls to boycott French goods.

But the Nice attack may have caught Ankara off balance. There is a growing tendency within Europe in particular to associate Turkey, long hailed as a Muslim country that was uniquely Western-leaning and determinedly secular, with Islamic fanaticism. Some have gone as far as to accuse Turkey of inciting the Nice attacks by calling on European Muslims to resist “Islamo-fascism.”

Nicholas Danforth, a Yale-trained historian and specialist on Turkey, suggested that Turkey may be getting a taste of its own medicine. “If the Turkish government thinks it’s unfair that they are getting blamed for this attack just because they expressed some of the same views as the attacker, they might consider why their country’s terrorism laws allow people to be jailed on the same unfair logic,” said Danforth. He was alluding to the thousands of people, many of them Kurds, jailed for airing views that would in most democracies be treated as free speech but are deemed threatening to Turkey’s national security.

Turkey’s image as a mentor of Islamic fanatics was spawned in the early days of the Syrian conflict, when it looked the other way as thousands of foreign fighters poured across its borders to join the Islamic state and other extremist groups. Erdogan’s increasingly overt embrace of political Islam, such as the conversion of the world-famous Hagia Sophia to a full-service mosque in July, has delighted Muslim conservatives the world over but is steadily eroding Turkey’s secular identity.

The first Islamic  prayers were due to be held Friday in the former monastery of Christ the Saviour in Chora, another Byzantine era church in Istanbul that was formally converted to a mosque from a museum this year. The Kariye, as its known in Turkish, houses some of the most exquisite frescoes of its time many of which have now been obscured by a white panel. In a surprise announcement, however, the Religious Affairs Directorate announced today that the inauguration had been postponed until further notice because work on the conversion was still underway. There is speculation that the delay was likely connected to the Nice attacks or the COVID-19 pandemic rather than any change of heart over its status.

It hasn’t helped that Turkish migrants have recently been targeting Armenians inside France as tensions between the two communities rise over Turkey’s military support for Azerbaijan’s ongoing campaign to wrest back the Armenian-majority enclave of Nagorno-Karabakh. Footage this week from the city of Lyon showing a group of men said to be Turks running amok in the streets shouting “Allahu Akbar,” “Where are the Armenians” and “Where are you, sons of bitches” has widely circulated on social media, as reported by the local online publication Lyon.mag.

“The perception of Turkey in France is extremely negative,” said Marc Pierini, a former EU ambassador to Ankara and a visiting scholar at Carnegie Europe. “Because every time Turkey pops up, it’s about Turkey creating a new problem,” he told Al-Monitor in an interview this week. “Even the Muslims of France are growing tired of Erdogan.”