France is considering new sanctions against Turkey over President Recep Tayyip Erdogan's “declarations of violence” as tensions wind further between the NATO allies. 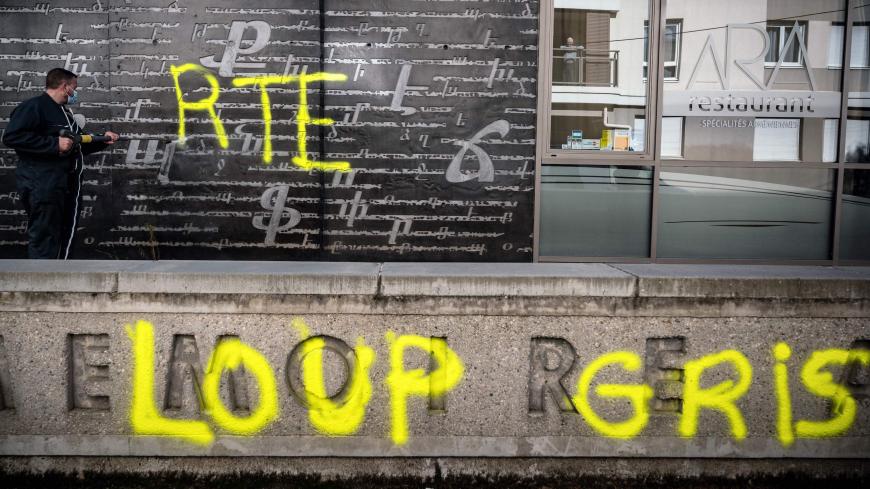 An employee cleans an outside wall of the National Armenian Memorial Center in Decines-Charpieu, near Lyon, France, where pro-Turkish graffiti tags referring to the Turkish president and ultranationalist group the "Grey Wolves" were painted overnight in this image taken Nov. 1, 2020. - JEFF PACHOUD/AFP via Getty Images

France hinted Thursday at new sanctions against Turkey over what it called “declarations of violence” by President Recep Tayyip Erdogan in an escalating row between the two NATO allies over Islam, the Eastern Mediterranean, Syria, Libya and more recently the South Caucasus.

“There are now declarations of violence, even hatred, which are regularly posted by President Erdogan which are unacceptable,” France’s Foreign Minister Yves le Drian told Europe 1 radio in an interview. “It is not only France that is targeted, there is total Europe-wide solidarity on the subject — we want Turkey to renounce this logic,” he said.

“An agenda of possible sanctions” will be on the table when the EU Council holds its next summit in December unless Turkey modifies its behavior, he warned.

EU sanctions would be crippling for Turkey’s economy, which is already beset by a melting currency, rising inflation and joblessness and a growing COVID-19 problem.

The group is closely affiliated with the far-right Nationalist Action Party, which is backing Erdogan and his ruling Justice and Development Party.

In the 1970s, the Gray Wolves fought pitched street battles against leftist students resulting in thousands of deaths. It’s also targeted Kurdish businessmen in turf battles over organized crime under the guise of combating “Kurdish terrorism.”

When the conflict between Turkey’s close ally Azerbaijan and Armenia erupted in 1991 over the mainly Armenian Nagorno-Karabakh enclave within Azerbaijani territory, hundreds of Gray Wolves joined the fight on the side of Azerbaijan.

Renewed conflict between Armenia and Azerbaijan has brought the Gray Wolves out on the streets again. The group was filmed recently chanting racist and pro-Erdogan slogans as they chased Armenians in the French cities of Grenoble and Lyon. A 23-year-old ethnic Armenian suffered a skull fracture after being hit by a hammer-wielding assailant. The footage was widely shared on social media, prompting a barrage of protests from Armenians worldwide.

The tipping point came over the weekend after a memorial to the 1915 Armenian genocide was vandalized in Decines-Charpieu, near Lyon. Graffiti scrawled on the monument included “Grey Wolves” and Erdogan’s initials “RTE.”

French President Emmaneul Macron’s far-right rival, Marine le Pen, accused his government via Twitter of failing to address “the real problem” — that of the “pro-Caliphate” Turkish Islamic association, the Milli Gorus or National View. She said the organization, which has branches across Europe, “runs 71 mosques and 10 Turkish schools” in France.

Relations between the two countries have become increasingly strained as Erdogan and Macron continue to spar, more recently over Islam. Erdogan recommended that the French leader have a mental checkup over the latter’s depiction of Islam as “a religion in crisis” and has called for a nationwide boycott of all Turkish goods.

Tensions deepened following the murder of French schoolteacher Samuel Paty by a suspected Islamist extremist and the murders last week by a Tunisian man of three French citizens in the city of Nice. Paty was beheaded by his assailant after showing his students cartoons from the satirical magazine Charlie Hebdo mocking the Prophet Muhammad and incensed Muslims worldwide.

Turkish prosecutors filed a criminal probe into Charlie Hebdo last week following the publication of an irreverent, many would say tasteless illustration of Erdogan in his underpants on its cover. Erdogan filed a separate criminal complaint and told a gathering of this ruling Justice and Development Party, "We are in a period when hostility to Islam, Muslims, disrespect for the prophet is spreading like cancer in Europe, especially among leaders." Macron is leading the hate campaign, Erdogan said, and sowing the seeds of “Islamofacism.”

Macron has defended the magazine, saying freedom of expression is an inalienable French value while refuting accusations that he is anti-Islam. He told the Financial Times in a letter yesterday that his government is fighting what he called “Islamist separatism” and not the faith itself. “I will not allow anybody to claim that France, or its government, is fostering racism against its Muslims,” he said.