The announcement comes after the defacement of an Armenian genocide memorial in France. Turkey and France have had a series of disagreements in 2020. 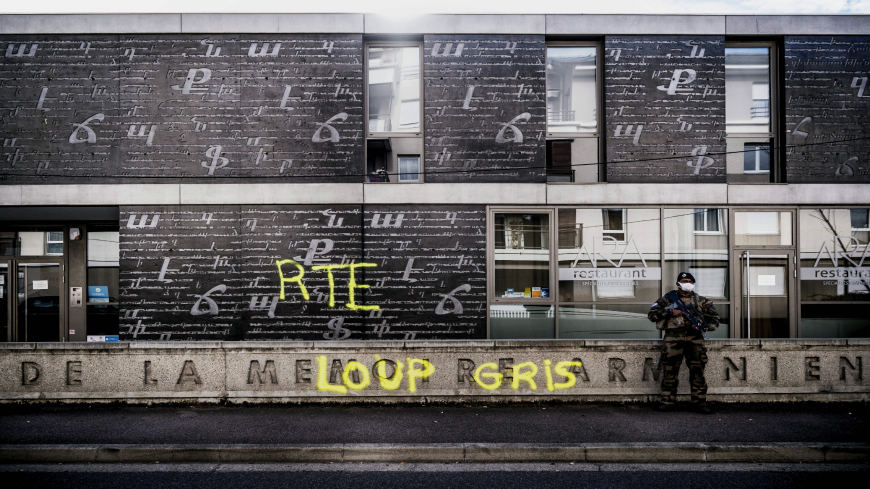 A French army soldier stands guard outside the National Armenian Memorial Center in Decines-Charpieu, near Lyon, on Nov. 1, 2020, where pro-Turkish graffiti tags have been painted overnight. Inscriptions read "RTE," which refers to Turkish Prime Minister Recep Tayyip Erdogan, and "Grey Wolf" (Loup Gris), the name of an ultra-nationalist movement in Turkey. - JEFF PACHOUD/AFP via Getty Images

The French government plans to ban a Turkish nationalist group after the defacement of an Armenian memorial as tensions between France and Turkey continue to rise.

On Sunday, a memorial to the Armenian genocide was defaced in the French city of Lyon, which has a large Armenian population. The monument commemorates Armenians who were killed in final years of the Ottoman Empire in what is now Turkey in the early 20th century. The vandals spray-painted “RTE,” which refers to Turkish President Recep Tayyip Erdogan, and “Gray Wolves” on the structure. The Gray Wolves are a Turkish ultranationalist group.

As a result, on Monday, France’s interior minister said that he will propose the ban to the governmental Cabinet on Wednesday, the state-owned news outlet France 24 reported.

“We are talking about a particularly aggressive group,” said Gerald Darmanin, according to the outlet.

The news is the latest in a string of issues between Paris and Ankara. Earlier this month, French President Emmanuel Macron defended a Parisian teacher who was beheaded after displaying images of the Prophet Muhammad. The teacher, Samuel Paty, showed the pictures in a class on freedom of expression. Many Muslims find images of the prophet offensive. France has a strong tradition of secularism dating back to the French Revolution. In a speech, Macron refused to disavow the images, citing a commitment to freedom of expression.

Erdogan has been one of the most vocal critics of Macron amid an international backlash in the Muslim world against Macron and France. The Turkish president is now calling for a boycott of French goods over Macron’s comments.

The NATO allies Turkey and France have already had a series of public disagreements this year. In July, France pulled out of a NATO mission in the Mediterranean after an incident with a Turkish ship in the sea. In Libya, Turkey backs the UN-recognized Government of National Accord, while France is closer to the Egypt-backed Libyan National Army. France also backs Greece and Cyprus in their conflict with Turkey over maritime borders in the Eastern Mediterranean, where Turkey is conducting energy exploration.

In May, France joined Greece, Cyprus, Egypt and the United Arab Emirates in condemning Turkey’s actions in the Mediterranean and Libya. The Turkish government called the countries an “alliance of evil” in response.

The tensions are not likely to die down in light of the Gray Wolves news and recent comments. In an interview with Al Jazeera on Saturday, Macron said Turkey demonstrates “belligerent behavior” with its NATO allies.