French President Emmanuel Macron angered many Muslim leaders when he defended images of the prophet of Islam after a Parisian teacher was beheaded for showing such images. 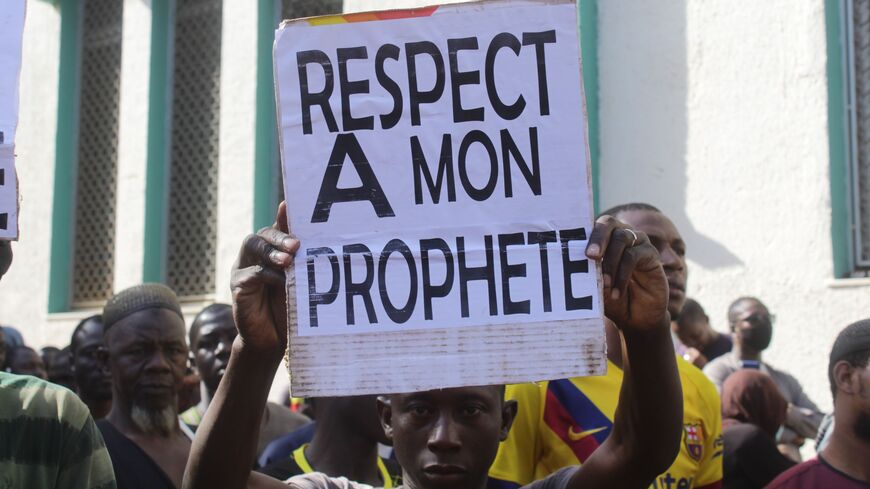 A man holds up a sign reading in French "Respect my prophet" during an Oct. 28, 2020, gathering outside the Great Mosque of Bamako in Mali that condemned French President Emmanuel Macron after he defended secular values and the right to mock religion following the murder of a French schoolteacher who had shown his class cartoons of the Prophet Muhammad. - SEYDOU CAMARA/AFP via Getty Images

Egyptian and Iranian leaders have joined the chorus of Muslim politicians criticizing France over recent comments pertaining to Islam and freedom of expression. There is a growing rift between France and parts of the Muslim world over the French president’s remarks on images deemed offensive to Muslims.

“If some have the freedom to express what is in their thoughts I imagine that this stops when it comes to offending the feelings of more than 1.5 billion people,” said Egyptian President Abdel Fattah al-Sisi in televised remarks Wednesday, referring to the world’s Muslim population.

Sisi’s comments were connected to recent remarks by French President Emmanuel Macron. Earlier this month, a Muslim student beheaded a teacher near Paris after the teacher showed images of the Prophet Muhammad during a lesson on freedom of expression. Many Muslims consider showing pictures of the prophet to be offensive. Following the incident, Macron defended the late teacher, Samuel Paty, saying in a speech, “We will not disavow the cartoons, the drawings, even if others recoil.”

France has a long tradition of secularism dating back to the French Revolution of the 18th century. The French magazine Charlie Hebdo has notably published caricatures depicting the prophet Muhammad. The outlet was also attacked by al-Qaeda militants in 2015; 12 people were killed.

Also Wednesday, Iranian Supreme Leader Ayatollah Ali Khameini made remarks similar to Sisi's on freedom of expression. “Ask your president why he supports insulting God’s messenger in the name of freedom of expression,” Khameini asked of French people, according to the state-run Press TV.

Macron’s comments prompted a backlash beyond Egypt and Iran. Supermarkets in Qatar, Kuwait and Jordan are now boycotting French products.

France is active in the Middle East, particularly in Lebanon, which used to be a French colony. The ordeal could harm French-Middle Eastern relations moving forward.