Following controversial comments made by France's president, calls are growing in Muslim countries for boycotts of French goods. 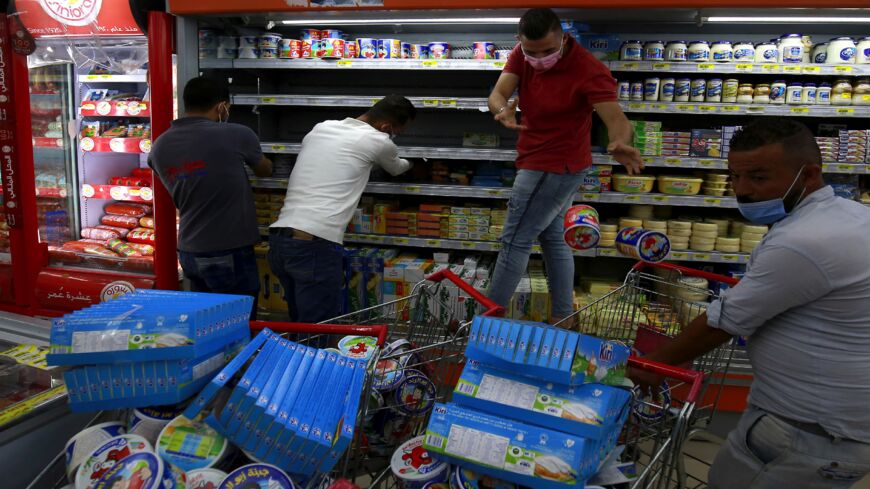 Workers at a supermarket in the Jordanian capital, Amman, remove French products from shelves during a boycott of French products, Oct. 26, 2020. Calls to boycott French goods are growing in the Arab world and beyond, after President Emmanuel Macron criticized Islamists and vowed not to "give up cartoons" depicting the Prophet Muhammad. Macron's comments came in response to the beheading of a teacher, Samuel Paty, outside his school in a suburb near Paris earlier this month, after he had shown cartoons of the Prophet Muhammad during a class he was leading on free speech. - KHALIL MAZRAAWI/AFP via Getty Images

Supermarkets in Kuwait, Qatar and elsewhere in the Muslim world are pulling French products off their shelves to protest recent comments made by French President Emmanuel Macron over controversial cartoons depicting the Prophet Muhammad.

Kuwait's nongovernmental Union of Consumer Co-operative Societies has reportedly yanked a number of items made in France. Reuters visited several co-ops Sunday and found the shelves cleared of French beauty and hair products as well as other French goods.

Union head Fahd Al-Kishti told the news agency the move was “taken independently of the Kuwait government” and was prompted by “repeated insults” to the Prophet Muhammad.

Earlier this month, an 18-year-old Chechen refugee beheaded a schoolteacher near Paris who had shown his classroom the cartoons of the prophet during a lesson on freedom of expression. Muslims consider depictions of the founder of Islam to be blasphemous.

The debate over freedom of expression in France was kindled last month after satirical French magazine Charlie Hebdo republished the same cartoons of the prophet that triggered a deadly terrorist attack on its offices in 2015.

Speaking at a memorial service for the teacher, Macron said last week that Samuel Paty was killed “because Islamists want our future.”

“We will not disavow the cartoons, the drawings, even if others recoil,” Macron said, highlighting the country’s long tradition of secularism.

“I am calling to all my citizens from here to never help French brands or buy them,” Turkish President Recept Tayyip Erdogan said during a speech on Monday. "European leaders must say 'stop' to Macron and his campaign of hatred."

On Friday, Qatar’s Al Meera supermarket chain announced that it would begin removing French products from stores, and Qatar University announced it would postpone its French cultural week.

In a statement on Sunday, the French Foreign Ministry called on world leaders to distance themselves from the boycotts and instead do their part to promote French businesses.

"These calls for boycott are baseless and should stop immediately, as well as all attacks against our country, which are being pushed by a radical minority," the statement read.