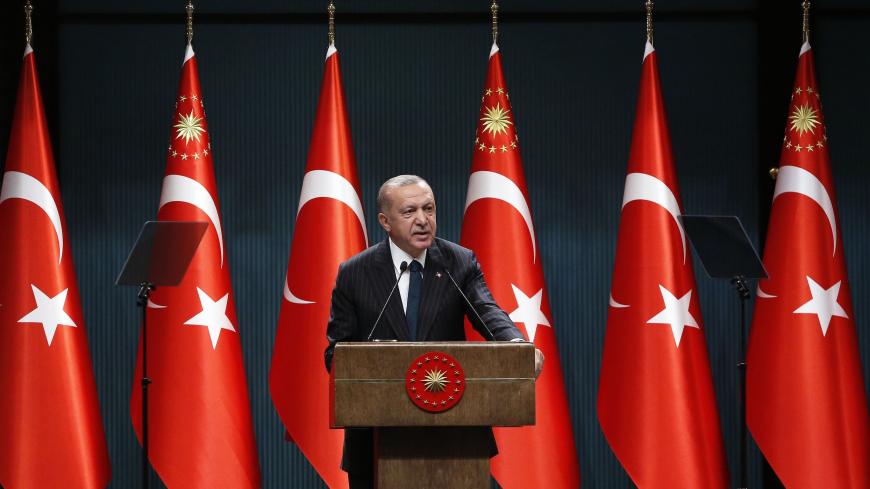 Lawyers representing Erdogan submitted a criminal complaint to prosecutors in Ankara, saying the content should be considered “libel” and was “not covered by freedom of expression.” The editorial staff of Charlie Hebdo did not respond to requests for comment.

Turkish presidential communications director Fahrettin Altun also condemned the caricature in a tweet Wednesday, calling its publication a “disgusting effort” to spread “cultural racism and hatred.” In response, French government spokesperson Gabriel Attal told reporters in Paris Wednesday remarks by Ankara officials had been “hateful” in the fallout caused by the caricature.

The developments come amid an ongoing spat between Erdogan and French President Emmanuel Macron, who have traded barbs in recent months over divergent stances in the Libyan war, tensions in the eastern Mediterranean Sea and more recently over fighting in the southern Caucuses.

Erdogan, who said he had not seen the caricature, told lawmakers of his Justice and Development Party (AKP) during a speech in Ankara Wednesday that Western countries mocking Islam want to “relaunch the Crusades,” vowing to stand against insulting remarks made toward Islam and the Prophet Muhammad.

"Unfortunately, we are in a period when hostility to Islam, Muslims and disrespect for the prophet are spreading like cancer, especially among leaders in Europe," said Erdogan.

The statements come in response to comments made earlier this month by Macron, who has increasingly targeted radical Islam in a series of controversial speeches.

On Oct. 2, Macron outlined a number of proposals to integrate Muslim citizens into French secularism, including the regulation of imams and mosques in the country. During the speech, the French leader said Islam was a religion “in crisis,” sparking a backlash from followers of the faith around the world.

On Oct. 16, tensions escalated further when French schoolteacher Samuel Paty was beheaded by Abdullakh Anzorov, an 18-year-old of Chechen origin, after having shown controversial Charlie Hebdo cartoons depicting the Prophet Muhammad during a class.

The event shook France, deepening the debate over state policies impacting its Muslim minority, with French leaders banning an Islamist group named after a co-founder of the Hamas movement on Oct. 21.

The controversy soon spread to already tense French-Turkish relations Saturday, when Erdogan questioned his French counterpart’s mental health over his statements regarding Muslims. The spat prompted Paris to recall its ambassador in Ankara Sunday, and Erdogan responded Monday by calling on Turkish citizens to boycott French products.

After Charlie Hebdo unveiled its caricature of Erdogan Tuesday evening, the Turkey-France row expanded to broader topics, including freedom of expression.

Lisel Hintz, an assistant professor of international relations at Johns Hopkins University, said that while the magazine has long been known for publishing provocative content, the latest developments allow Erdogan “to stand up as the regional and even global defender of Muslims that he claims to be.”

“This dispute, like any other perceived attack on Islam in Europe or the United States, provides Erdogan with justification for his hostile rhetoric and generally uncompromising policy stance toward the West,” Hintz told Al-Monitor.

She said the magazine cover was “deliberately offensive” in its questioning of the Turkish leader’s commitment to Islam and could be used to serve Erdogan’s political goals.

“The extent to which this can be considered offensive by Turkey's pious Muslims provides Erdogan with precisely the kind of external enemy he can deploy to rally conservative and nationalist voters of various stripes,” Hintz told Al-Monitor.

Charlie Hebdo’s Paris office was attacked by gunmen in January 2015 as retaliation to caricatures the magazine had published featuring the Prophet Muhammad, deemed blasphemous in Islam. The event resulted in the death of 12 people and continues to be the subject of debates regarding free speech in the country.

Following the attacks, Turkish officials issued statements in solidarity with victims of the shooting. Merve Tahiroglu, Turkey program coordinator at the Washington-based Project on Middle East Democracy, said Erdogan wanted to “at least appear on the side of freedom of speech” at the time.

“Today, he no longer seems to value that pretense,” Tahiroglu told Al-Monitor. “He feels emboldened enough to sue that same magazine just days after a man was beheaded for showing a cartoon during a lesson on freedom of expression.”

Tahiroglu noted a large portion of the Turkish public holds unfavorable views toward France following a string of spats between Ankara and Paris, and the AKP government is now poised to exploit such sentiments as it condemns Charlie Hebdo’s latest caricature of Erdogan.

“[Erdogan] knows that in this climate, the Turkish opposition will have a hard time defending Charlie Hebdo’s freedom of expression, lest it appear as a defense of France against Turkey or the Muslim world, and he doesn’t seem to care about what this will cost him vis-a-vis his image in European democracies,” Tahiroglu told Al-Monitor.

On Tuesday, Erdogan also filed a lawsuit against anti-Islam Dutch lawmaker Geert Wilders, who described the Turkish leader as a “terrorist” in a tweet earlier this week.