Schools in crisis in Turkey’s southeast 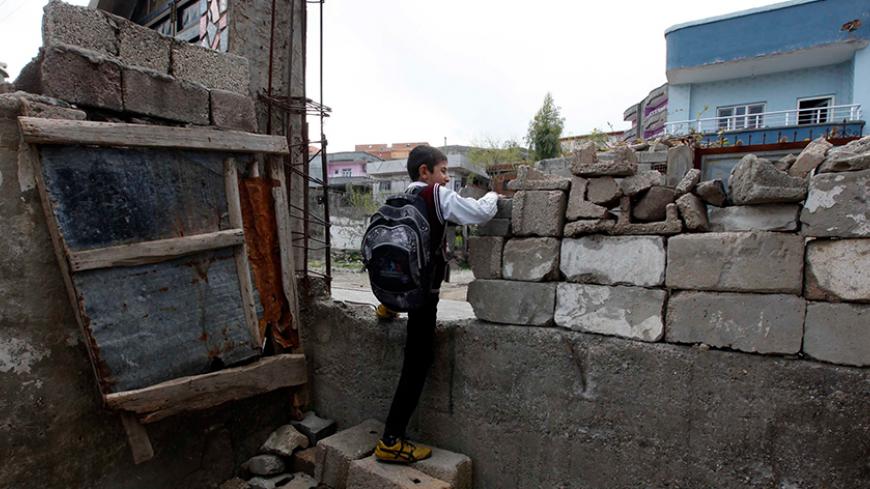 A young Turkish boy heads to school in the town of Cizre in Sirnak province, near the border with Syria, March 24, 2013. - REUTERS/Umit Bektas

The renewed conflict in Turkey’s predominantly Kurdish southeast has wreaked havoc on the schooling system in the region. Many teachers from western Turkey, appointed to schools in the region after a long wait, have refused to go to their places of duty, while those who did are working in a state of edginess.

In mid-September, the government made 35,563 new appointments to 37,000 teaching vacancies, and 67% of them were to schools in the southeast.

A survey by the Education and Science Laborers Union (Egitim-Sen), conducted early September among 1,087 teachers in 10 eastern and southeastern provinces, found that 32% of them consider quitting the profession. One in every three teachers in Hakkari and Sirnak, two of the provinces worst affected by the unrest, have already requested reappointment this year, according to Sakine Esen Yilmaz, secretary-general of Egitim-Sen, which has 127,000 members across Turkey.

The trade union’s report made available to Al-Monitor says 89% of teachers in the southeast believe the schooling process cannot function properly under the current conditions. A total of 83% are unhappy in the region, including 42% who are seeking reappointment to other provinces and 41% who say they are unwilling to work in the region.

Yilmaz told Al-Monitor that 38% of the respondents worried for their safety and that there was a quick turnover of teachers in the southeast.

“We tried to measure how the conflict has affected education practitioners and to show what consequences the crisis has had and can have in the coming days. This year, some 36,000 new teachers were appointed. Yet, these education workers, who had waited for years to be appointed, are now in the grips of anxiety. Many are unwilling to go to the region, while those who did want to leave,” Yilmaz said.

Yilmaz believes this sense of estrangement is a reflection of Ankara’s disruption of the settlement process with the Kurdistan Workers Party (PKK) and the subsequent rise of ethnic tensions between Kurds and Turks.

“If teachers say they dislike their schools and the local people, this is closely related to the general state of politics, the polarization of society and the end of the negotiation process,” she said.

“We came together for a peace rally in Ankara [on Oct. 10], and it was bombed. We fear that the culture of violence will expand to schools as well,” she added.

The Egitim-Sen survey asked respondents to cite the main issues hampering education in the southeast. Fears of safety topped the list, cited by 38% of respondents, followed by the physical shortcomings of school buildings with 24%, the shortage of teachers with 16% and transport problems in rural areas with 14%. The teachers cited a number of other problems, listed as follows:

Drawing a grim picture of prevailing conditions in the southeast, Yilmaz said, “Curfews are being imposed in many districts one after another. In Nusaybin, Lice, Silvan, Semdinli, Yuksekova and many districts of Sirnak, no one is able to go to school. Education has become impossible. Most teachers are taking leaves. In Diyarbakir, for instance, four schools in the Sur neighborhood have been closed and students moved to other places. Schools with up to 700 or 800 students are being closed, with students transferred to other schools. To speak of education in those regions is impossible. Double-shift schooling is [widespread]. Because dark falls at the time of late afternoon classes, fearful parents take their children from school before those classes. No one can stop them from doing that.”

The Education Ministry is currently working on a number of special incentives for employees in disadvantaged areas, including financial compensations and public lodgings. Yilmaz, however, is pessimistic. “The ministry can do nothing in the current environment. The problem is over its head. Moving students is not a solution. First and foremost, the environment of peace must be restored. The arms must be silenced,” she said.

A teacher in Sanliurfa who wished to be identified only as H.B. told Al-Monitor that he was especially anxious while traveling because of checkpoints that armed PKK militants often set up on roads. As one precaution, for instance, teachers in Sanliurfa try to avoid flying from the airport in neighboring Diyarbakir, the largest city of the southeast and a hotbed of Kurdish militancy, when they go to their hometowns, he said.

“I speak on the phone with colleagues in Sirnak and Diyarbakir. They say certain people [PKK militants] come to schools during the day and bully headmasters to finish the classes. Most of their students are not coming to school, and proper education is impossible,” the teacher said, adding that the situation in Sanliurfa was relatively better.

The Egitim-Sen report concludes with a call for peace. “We believe that healthy education can proceed only in an environment of peace,” it says. “The arms should be silenced immediately. All acts of violence that have wreaked havoc on the lives of teachers, students and the local population should come to an end immediately.”