The Justice and Development Party continues its purge of secular teachers from schools, further tacking toward the Islamization of Turkish public education and leaving thousands of teachers without jobs. 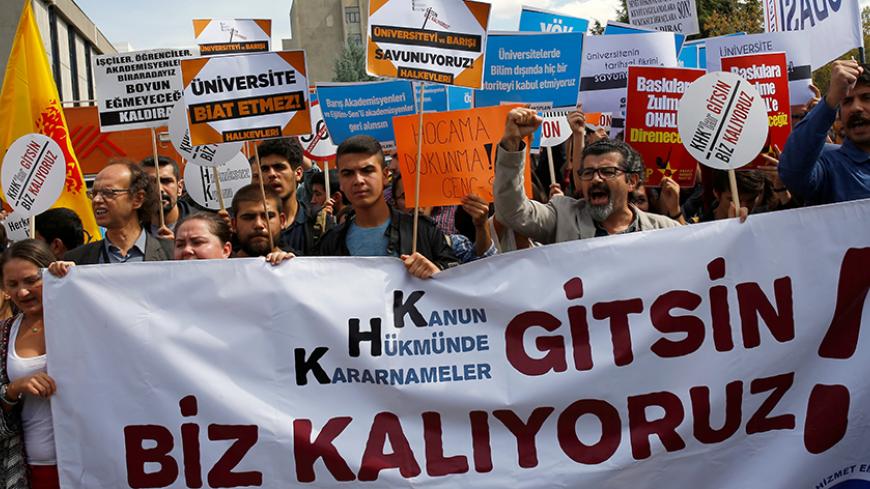 Demonstrators hold signs in front of the Council of Higher Education during a protest against the suspension of academics from universities following a post-coup emergency decree, in Ankara, Sept. 22, 2016. - REUTERS/Umit Bektas

After his graduation from Cukurova University’s psychological counseling and guidance department, Muhammed Can wanted to work in a public school. The young Turk, an avid sports and arts lover, passed three pedagogical exams and was expecting to be finally recruited when the July 15 coup attempt interrupted the process.

As part of massive purges after the putsch, the government suspended 28,000 teachers. Though the crackdown was meant to uproot followers of Fethullah Gulen, the accused mastermind of the coup, thousands of Kurdish teachers and others belonging to trade unions aligned with the opposition were also caught in the net. The government announced it would recruit 20,000 new teachers to fill the vacancies, but it also introduced a new element to the recruitment process: an interview after the written exams.

Here is how Can recounted his interview to Al-Monitor: “There were three interviewers and they were very polite. One even complimented me, saying, ‘We are going to have a handsome teacher.’ I picked one of the envelopes, which contained two questions from my domain. I was delighted because those were subjects I knew well. While I was answering, one of the commission members interrupted me and asked, ‘Do you fast [during Ramadan]?’ I was surprised. I said, ‘No, I don’t,’ and their attitudes changed thereafter. Though my field is psychology, they asked me a question about museums before ending the interview. I needed 60 points to pass, and they gave me 45. So I couldn’t get the job.”

Can’s case is not an isolated incident. According to the Education and Science Laborers Trade Union (Egitim-Sen), which has the largest membership of teachers in Turkey, questions about religious and political leanings are systematic, designed to determine whether candidates are supportive of the ruling Justice and Development Party (AKP). Some candidates, for instance, have been questioned about their views on the nationwide anti-government protests in 2013 and whether they took part in them, while others had to explain how they view reverent references to Kurdish militant leader Abdullah Ocalan or what they think of the call to prayer being performed in Kurdish rather than Arabic. The interviewers wanted to know the civic society groups the candidates may belong to, the newspapers they read, the prep school they attended ahead of university entrance exams and how they viewed the July 15 coup attempt. Some candidates even had to describe their feelings about Tarik Akan, the iconic Turkish actor who died last month and was a vocal AKP critic. But the question that made the most headlines was the one about whom the candidates think of when they hear the word “reis,” which means "chief" or "captain" and is used by AKP supporters to denote President Recep Tayyip Erdogan.

For Egitim-Sen chairman Kamuran Karaca, the interviews prove that the government seeks to recruit loyal allies rather than good teachers. “The interview commissions have been composed of AKP cadres. The questions reveal that the objective is not the quality of education but partisan staffing,” Karaca told Al-Monitor. “We are going through a gloomy period in which the AKP uses education as a tool for partisan staffing.”

Transforming school staffs seems to be another stage in what Erdogan describes as his goal of raising “devout generations.” The government has already taken important steps in that direction, including a massive expansion of the imam-hatip religious schools, and the introduction of the Quran and the life of the Prophet Muhammad as elective courses in public schools.

Karaca is alarmed that Turkey may soon become another “Afghanistan or Pakistan” if the AKP forges ahead with efforts to Islamize education. “They are after the Ottoman model in education,” he said, adding that “semi-religious models” inspired by ancient Islamic monasteries were being discussed in AKP quarters. “The process of Islamizing education is being woven with semi-scientific, semi-religious models. If it goes on like this, Turkey will become like Afghanistan or Pakistan.”

Yet, for the potential risks of “generation engineering,” one does not need to go as far as Afghanistan or Pakistan. The coup attempt in Turkey was in itself a grim reminder of the disasters that such ambitions may produce.

Sociologist Kemal Inal points out how the Gulen community — once a major actor in the education sector — aspired to raise a pious generation, which it advertised as a “golden generation” of science-savvy, globally competitive Muslims. “It all ended in a bloody coup against the government, parliament and their own army,” Inal told Al-Monitor. “People were crushed under tanks in the streets, hundreds of innocents were killed and the country’s parliament was bombed by its own warplanes. Most of the putschists had gone through a secular education, but their real allegiance was not to science and democracy, but to a religious authority.”

Erdogan’s “devout generation” goal is not limited to basic education. After the coup attempt, it has increasingly expanded to universities as well. Some 2,500 academics have been expelled since July 15, most of them government opponents. Inal himself lost his teaching position at Ankara’s Gazi University, along with his academic titles. Today he is a jobless man with an uncertain future like most of his fellow academics hit by the purge. Many of them have had their passports canceled, unable to even go abroad.

Can, too, is convinced that public service is now off-limits to him. “I love my profession, but I won’t be able to work in the public sector even though I so much wanted to do so,” he said.

Things seem even worse for the expelled teachers, who are now stigmatized and struggling to find any jobs in the private sector. “They wouldn’t employ me even as a porter,” one of them said in a recent newspaper interview. Many parents, meanwhile, are stretching their financial means to send their children to private schools as more and more public schools are being converted to imam-hatip ones. In other words, for citizens who do not subscribe to the AKP’s political creeds or are not Sunni Muslims, the “devout generation” project has come to mean exclusion from the public education realm, both as servants and beneficiaries.

Education Ministry offices across Turkey are today the venue of frequent demonstrations. The protesters are sometimes expelled teachers, sometimes eliminated candidates, and sometimes parents and students. Yet they have one common demand: a scientific education system that provides equal opportunities for all.

Inal believes the response to this demand would be vitally important. “We have no other option than to base our schooling and education system on science and free thinking. What we need is free rather than devout generations,” he said. “No doubt, every person has the right to believe in a religion, but, as we all saw on July 15, you end up facing a putschist religious community if you fail to base education on secular principles. We need generations of free and democratic thinkers.”