Ankara’s draconian crackdown on the Gulen community is now moving into a new direction, targeting Kurds accused of collaborating with armed Kurdish militants. 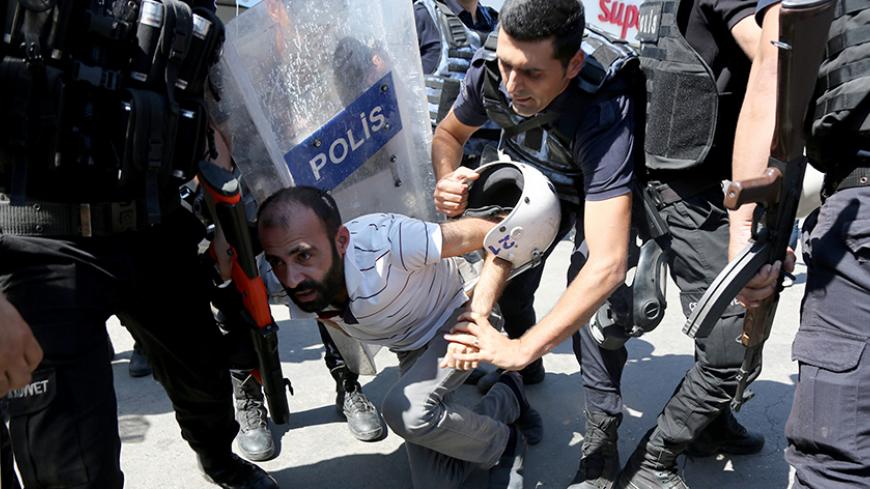 Riot police detain a demonstrator during a protest against the suspension of teachers from classrooms over alleged links with Kurdish militants, in the southeastern city of Diyarbakir, Turkey, Sept. 9, 2016. - REUTERS/Sertac Kayar
Sukru Kucuksahin
September 12, 2016

While Ankara’s post-putsch crackdown on Gulenists is increasingly called into question — most recently by President Recep Tayyip Erdogan himself — the purges are now expanding to Kurdish quarters accused of backing the Kurdistan Workers Party (PKK), a designated terrorist group. Days after some 11,000 teachers were suspended with a single decree last week, the government ousted two dozen elected Kurdish mayors, raising the specter also of company seizures and property confiscations. Such measures may have largely subdued the Gulenists, now labeled by Ankara the Fethullah Gulen Terror Organization (FETO), but can they produce the same results against the PKK and the Peoples’ Democratic Party (HDP), which Ankara sees as the PKK’s political extension? Is the government fanning tensions at a time when bloodshed in the Kurdish-majority southeast is already a daily occurrence?

When it comes to the rule of law, Turkey’s record has never been spotless, but the measures employed since the July 15 coup attempt have sparked an alarm that compares to no other period in the past.

Armed with emergency-rule powers, the authorities have put tens of thousands of people behind bars, including hundreds of businesspeople who saw their properties confiscated, and dismissed more than 60,000 public servants, with the stated aim of dismantling FETO, which stands accused of carrying out the putsch.

The frenzy and severity of the purge seems to have irked even its standard-bearer, Erdogan, who last week grumbled that “irrelevant” people were being targeted. Then, addressing governors, he said, “I don’t want you to compete with each other on who gets more public servants dismissed. I want you to be fair.”

Many are now worried that a similar crackdown on suspected PKK supporters will open irrecoverable wounds.

A retired Turkish diplomat with ample experience on the Kurdish issue told Al-Monitor that luring PKK sympathizers to legitimate politics was crucial, and warned that the purge of teachers posed serious risks for the future. “When struggling with a separatist terrorist organization, drawing its proponents and supporters to a legitimate ground is extremely important. So constantly pushing the HDP around, trying to push it to a wall is wrong. Though the HDP’s bond with the PKK is known, the state should seize every opportunity to force a party with more than 10% of the vote into the legitimate realm,” he said on condition of anonymity.

According to the diplomat, a major opportunity to lure the HDP away from PKK influence was squandered after the June 7, 2015, elections, in which the party won 13% of the vote, drawing support also from ethnic Turks. The election aftermath saw the resumption of armed conflict between the PKK and the security forces, which, according to the diplomat, was a sign that neither the Turkish state nor the PKK wanted a stronger HDP.

“Everyone should think why the PKK doesn’t want to see a strong HDP,” he said. “And all procedures and actions today should be conducted accordingly. Thus, the dismissal of the teachers is not a sensible act and could pose great risks for the future.”

The first signal of a clampdown on Kurdish public employees came Sept. 2 when Prime Minister Binali Yildirim said thousands of teachers would be removed from schools in the mainly Kurdish southeast and reappointed elsewhere on the grounds they worked to advance the PKK’s agenda. In an even more ominous warning two days later, he said, “They will face what FETO has faced, and this is not limited to teachers only. Terrorism is present within the state and local administrations as well. All public servants who rub shoulders with terrorism will be dealt with and weeded out one by one.”

His statement drew harsh reactions from top officials of both the HDP and the main opposition Republican People’s Party, which questioned how the targeted teachers were found to be PKK backers without any due legal process. Despite the outcry, the Education Ministry suspended 11,285 teachers Sept. 8, all of them members of the leftist Education and Science Laborers Union (Egitim Sen), which is popular with the Kurds.

For Egitim Sen Chairman Kamuran Karaca, the move confirms the government’s intention to disable all its political opponents. Fresh from a meeting with Education Ministry officials, he told Al-Monitor the criteria used to single out the targeted teachers was their participation in a one-day strike on Dec. 29, called to protest the twin suicide attack that killed more than 100 people in downtown Ankara on Oct. 10 ahead of a rally for a peaceful solution to the Kurdish conflict. “Nine months have passed since the strike, and no administrative or judicial investigation had been launched against those teachers,” he said.

Karaca believes the teachers had already been blacklisted as government opponents, with the help of a pro-government trade union. “Our trade union advocates democratic, scientific and secular education. If any teacher has been seen digging trenches or taking part in armed clashes [along with PKK militants], then all necessary measures should be taken, but that’s not what’s going on,” he said. “They want to purge all their opponents, now that the law is suspended under the state of emergency. This will have a heavy cost and polarize people, leading to serious consequences.”

Veli Demir, the head of the social democratic Education and Science Functionaries Trade Union, voiced similar misgivings, warning also that secular education was in danger. “More than 1,000 FETO schools were seized, and the prime minister had said they would continue to operate in the fields they used to operate before July 15,” Demir told Al-Monitor, recalling the seizure of hundreds of Gulenist schools soon after the putsch. “But now, those schools are being converted to imam-hatip schools,” he said, referring to schools that provide Quranic education.

Demir mentioned instances in which both spouses of middle-aged teacher couples had been suspended, stripped from their livelihood and retirement rights. “This shows the goal is to destroy, to annihilate,” he said. “This measure will serve nothing but resentment, enmity and chaos.”

In a parliamentary question to Yildirim, HDP parliamentary whip Idris Baluken said the scale of the purge meant that almost no native teachers would be left in schools in the southeast. “Is the purge of Kurdish teachers meant as the beginning of a new assimilation process in the region?” he asked.

The suspensions also raise the question of how safe the replacement teachers will be in the region as they are likely to face a hostile environment. Moreover, the PKK may call for a boycott of schools altogether, making the problem even more inextricable.

And beyond the field of education, Ankara ousted 24 elected Kurdish mayors Sept. 11, replacing them with trustees, mostly governors and district prefects. Four other municipalities met the same fate for alleged links with FETO. “No democratic state can or will allow mayors and members of parliament to use municipality resources to finance terrorist organizations," Justice Minister Bekir Bozdag said on Twitter. “Being an elected official is not a license to commit crimes.” In a defiant response, the HDP said it viewed the decision as “null and void,” warning that the move “will deepen existing problems in Kurdish cities and make the Kurdish problem an unresolvable one.”